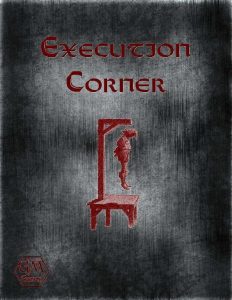 This little pdf clocks in at 5 pages, 1 page front cover, 1 page editorial, 1 page back cover, leaving us with 2 pages of content, so let’s take a look!

This is essentially system neutral, sporting no rules-relevant components, but the supplement obviously works bets in quasi-medieval settings.

Now, if you’re even halfway familiar with the history of the penal system, you will know that, at one point, we realized that basing a penal system solely on corporeal punishment, instead of focusing on reeducation and rehabilitation, would in the long run hurt society. I’m not going to bore you with a summary of Foucault’s Surveiller et Punir (Discipline and Punish), as pretty much every freshman gets to at least read a summary at one point; just let it be known that executions and corporeal punishment were routed in parts in the Christian notion of the world being a valley of tears to cross for a better afterlife – a notion we have thankfully, mostly, managed to at least lessen, courtesy of the wonderful advances of modern life.

However, in fantasy gaming, this notion does indeed ring true – because it kinda is. Particularly if your world is pretty grim and down to earth, the medieval notion of life being short, painful and something to be endured while people die like flies makes sense. That being said, beyond the spectacle of execution, the executioner himself, much like butchers and those working on leather, traditionally were rather shunned. When, after a lifetime of diligent service, Nuremberg’s Meister Franz Schmidt managed to gain citizenship rights in the city, that was a truly impressive achievement. As an aside, I have read his journals (he taught himself to write), which are still available for insight in Bavaria, and they are worth reading. For the less academically-bent, I can wholeheartedly recommend “The Faithful Executioner” by Joel F. Harrington for insight into the profession and this fascinating character, but I digress.

Unlike cities, most communities and villages had no resident executioners, often requiring that these folk travel through the rather unsafe roads from place to place, or sporting singular hangman’s cottages between the settlements, so that no settlement would have to necessarily count the hangman as one of its denizens. This pdf depicts one such rural set-up, with a hand-drawn full-color map (sans squares or other indicators of scale) depicting the execution site, the home of the executioner, as well as the little industry that sprang up around it: We learn about a baker selling bread on execution days, about an enterprising gentleman selling the ostensibly magical hair of the hanged, and about a tavern that has sprang up to cater to the folks that come to gawk. The nearby fields of the corrupt are where the executed are then buried in unmarked graves. Nearby creeks and woods are also explained, and 5 miscellaneous assorted facts provide further food for thought for the GM.

Editing and formatting are pretty good on a formal level. Layout adheres to a no-frills two-column b/w-standard and manages to cram quite a lot of content on the one page. The map provided is nice, and while it does sport names for the depicted locales, no immersion-breaking numbers are provided. Big plus! The pdf has no bookmarks, but needs none at this length.

Tim Shorts is up to his A-game here. This humble pdf is fun, evocative and cool. While I really wished that Tim Shorts had spent a full-sized book on the subject matter and its vast, mostly untapped potential, this pdf provided a fun supplement. It’s not a pdf that will change your life, but it does its intended job well – as a PWYW-pdf, this is certainly worth leaving a tip! My final verdict will hence clock in at 4 stars.