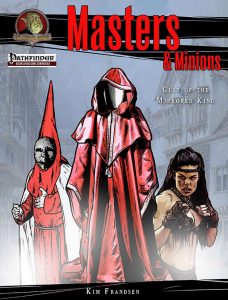 This installment of the Masters & Minions-series clocks in at 19 pages, 1 page front cover, 1 page editorial, 1 page ToC, 1 page introduction, 1 page SRD, leaving us with 14 pages of content, so let’s take a look!

Now, this is a toolkit for a basically ready-to-play evil cult. As such, there will be some SPOILERS below. Potential players should jump ahead to the conclusion.

All righty, only GMs around!

So, I can summarize this pdf in one sentence: This is Vidocq, the gaming supplement. If you haven’t seen the 2001 movie, then do so at your earliest convenience. I used its visuals and aesthetics with great fun in my Ravenloft game back in the day – it’s an inspired supernatural mystery movie with a pretty subdued magical angle that makes it perfect for low/rare magic or gritty games, though it works just as well in a high fantasy context. And yes, this would work perfectly in Fat Goblin Games’ Shadows over Vathak. As an aside: The title track was contributed by Apocalyptica featuring Matthias Sayer, the singer of Farmer Boys, an obscure German metal/rock band that is criminally underrated. The music video for Hope Vol.II, said track, made me get the movie, and it floored me as much as the excerpts from the video made me hope it would. It’s not a super high-budget blockbuster, but it’s still one of the movies I’d consider true, hidden cinematic gems.

Now, there are some differences between the movie and the supplement – instead of the singular “Alchemist” serial killer in the movie, we have a cult on our hands here – one that serves the eponymous Mirrored King, a mighty devil who specializes in deception and overthrowing authority – and interesting decision to represent the methodical approach here, as opposed to the chaos of demonic agendas we’d usually associate with overthrowing authorities. Now, while in the movie, the chemical component is represented by the title “The Alchemist”, it is here provided via the angle of a drug manufactured by the cult – Unachieved Dreams. This drug, obviously, helps capture the seedy, grimy aesthetics of the movies without having to use established drug-stats for, for example, opium, which do not fit the narrative requirements.

So, this magical drug nets 4 hours of sleep, uninterrupted, and imbibing it risks severe addiction with a nasty DC 24 Fort-save. At 1 gp, it is pretty inexpensive and nets +2 to Charisma checks (not properly capitalized) – here is the nasty twist: While the imbiber sleeps, they witness their greatest desires made manifest, but unbeknown to the imbibers, their souls are drawn to the Mirrored King’s palace in hell, where they actually experience these; upon reduction to Wisdom 0, the souls of the addicts are magic jar’d by the nasty entity, and their body, outsider-possessed in a way, may continue functioning. This has horror potential galore and can be really frightening when played right.

Now, such a drug operation obviously does require some muscle and cogs in the machine to work – this time around, this is represented by three CR ½ flunkies: A bruiser, a drugrunner, a catburglar, and we get a CR 4 cult initiate – all of these come with full statblocks using NPC classes. Beyond these generic NPC stats for the lower ranking cult members, we get stats for Borunda “Smasher”, the CR 4 barbarian muscle of the cult – alas, her statblock does have a few glitches – her raging version’s CMB and CMD, for example, are incorrect – they do not take in the boosts. Easy enough to fix, but kinda jarring. For more delicate tasks, there would be “Shorty” Mirrek Novos, a CR 4 halfling rogue, who takes care of accounting as well. This fellow’s stats do get CMD/CMB right, btw.

The star here, though, would be the Mirrored Man, the stand-in for the primary antagonist in the movie: The mirror mask-wearing mastermind of the cult: The Mirrored Man clocks in at CR 10 and is an interesting cleric 6/alchemist (mindchemist) 5. We get a background story here, and in an interesting twist, the stats here do come rather close to the tricks the character can pull off in the movie. Speaking of which: The mask is represented here as a mighty, unique magic item, the mirrored mask, which allows for excellent redirection of divinations, and enhances Disguises – the hands of an evil vigilante, this one could become even worse… As a minor missed chance, it would have been nice to see the movies’ soul-glass angle represented here as well.

The supplement does not stop here, though: We get a summary of the current goals of the Mirrored Man, with the plots woven by these smart and dangerous foes and their considerable ambitions noted. Beyond these angles, the pdf also depicts the Tavern of Achieved Dreams, the headquarter of the cult – and guess what: We get a surprisingly nice, full-color map of its two floors, with squares noted. Getting a full-color lair map, particularly one you can use just as a handout, makes for a great additional option here, and ends the pdf on a high note for me!

Editing and formatting are good, though not perfect – I noticed a few minor snafus, though nothing that wrecks the supplement. Layout adheres to a fitting and flavorful two-column full-color standard with blood splotches etc. – this is an aesthetically-pleasing pdf, and we get quite a few nice full-color artworks I haven’t seen before. The pdf comes fully bookmarked for your convenience.

Kim Frandsen’s tribute to Vidocq is a truly fun little pdf – but I have a hard time rating it. You see, I’m a pretty rabid fanboy of the movie, and its one of the very few movies I watched more than once. On one hand, I do think the lore does have more potential than what we get in here; on the other hand, I really enjoy the twists that have been made regarding the concepts the movie provides.

Let me make that very clear: This is a riff on the subject matter, and a good one at that.

Now, personally, I’d be making the mirrored master of the cult a gestalted mythic alchemist/skinchanger (Legendary Games’ excellent hybrid class), but one can’t conceivably expect the like from a supplement intended for mass consumption. While it has a few rough edges, the pdf delivers on what it promises, and it could have easily really botched the pretty demanding subject matter. Hence, my final verdict will clock in at 4 stars.

You can get this cool cult here on OBS!