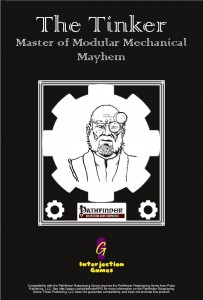 This pdf is  34 pages long, 1 page front cover, 1 page hyperlinked ToC, 1 page SRD, leaving us with a whopping 31 pages of content, so let’s take a look!

So, what’s up with the Tinker-class? He gets d8,  4+Int skills per level, proficiency with simple weapons, light armor and shields, 3/4 BAB-progression, good ref-saves  – and that’s where the basic components stop. Tinkers get access to so-called inventions. In order to use inventions, a tinker needs an int-score of 10+ the invention level. In contrast to spell-DCs, DCs, when applicable, for inventions, are 10 +1/2 class level + Int-mod.

Tinkers also get 1+Int/3 blueprints and each blueprint and each blueprint contains class level times build pool points, with 5th level and every 5 levels after that offering  an additional blueprint beyond those granted by the Int-score formula. The tinker can deploy automatons 1/day/level.

Beyond that, the Tinker gets an invention-book, which is somewhat akin to a wizard-book in how it works regarding copying from it etc. Tinkers start with 3+Int mod inventions at first level and get +2 inventions per level, of any available level – for depending on the level of the tinker, inventions of up to 6th level are available. Scribing these for other tinkers to use also works akin to scribing scrolls. But that’s where the similarities with spellcasting ends.

Tinkers also create so-called automatons, at 1st level he creates the first and then at 7th and 13th level additional automatons. These automatons can be directed via (Surprise!) so-called Directives, which can be deciphered via Spellcraft. A total of 8 directives from attacks to support and idle and following is covered  and issuing these directives is a standard action, but shutting these automatons down to an idle state is a free action. Automatons get up to 7 HD (at 20th level, though information for further progression is present) and may at this Tinker-level, have +2 saves , Str and Dex 14 (starting off with 10) and 47 HP. Automatons are created much like spells are prepared

At 4th level, the Tinker also gets a special automaton, the Alpha, who may use untrained skills in contrast to regular automatons and which may actually make its own decisions, including AoOs. Alphas may get up to 12 HD (again, with information to transcend the 20th level cap, if need be), up to +4 to saves, Str and Dex of up to 20 (starting at 12) and 90 HP as well as feats on every third HD. At higher levels, the Alpha may issue directives autonomously and at 19th level, even temporarily replace the tinker’s abilities in commanding his/her automatons while s/he is incapacitated. Also, in contrast to losing automatons, losing an alpha s actually penalized, costing the Tinker quite an array of GP to rebuild his crowning achievement, should it ever be destroyed.

Abilities? Yes – for when looking just at the basic table, the automatons are WEAK. Which is by design – from the 1st level on, the automatons get the tinker’s BAB as an insight bonus to atk, AC and CMD and may use the tinker’s BAB to calculate their CMB and additionally may add their creator’s saving throws as insight bonuses to their ridiculously low own – but only when within 30 ft. of the Tinker, 60 ft. at 9th level. This is an interesting balancing take indeed, as it makes the automatons and creations much more susceptible to being destroyed when sent on errands and used haphazardly and provides a nice rules-justification for the tinker to actually maintain proximity to his creations and not use them (exclusively) as expendable trap/ambush-bait.

Of course, bonuses to crafting, as were to be expected, are also part of a tinker’s array, as is a rather cool idea – at 11th level, the tinker essentially gets a swarm of nanite-style constructs that can act as a mage hand and comes with 3 charges that allow the swarm to use fabricate once per charge. Starting at 14th level, tinkers may use disintegration via their swarm on living targets, fabricating duplicates of their dissolved bodies and later even break down walls of force and similar magical effects.

Additionally, at 2nd level and every 4 levels after that, the tinker learns an innovation and at 5th, 10th and 15th a greater innovation. Unless I have miscounted, tinkers may select from a total of 21 innovations to add to their automatons – and they are interesting indeed: For example, you may opt to grant your Alpha +2 to Str and Dex and +1 HD at the cost of one less regular automaton deployed at any given time, enhance the range in which your Alpha benefits from your Master’s aura, add a charge to your swarm’s charge pool etc. or increase the durability of your constructs, available blueprints or an addition invention with a limited build pool for your Alpha – permanently – unless you take a second innovation, that is. There are also innovations here that allow you to make your automatons capable of aiding others and one to make your automatons go kamikaze in a limited radius. Among the Greater Innovations, we get the options to rebuild your Alpha from scratch, enhance the physical prowess of your constructs and swap out deployed automatons 3/day with other blueprints you may have prepared. I have already mentioned the option to create massive, over-sized automatons or deploy your swarm not as a spell-like non-magical ability, but as a type  of swarm-automaton. It should also be noted, that a certain innovation, designer, is required to get access to certain inventions, so you might want to fracture that into your contemplations.

The class comes with favored class options for the core-races as well as 4 new feats, one of which nets you an extra innovations. One lets you give directives as if a tinker/command unsupervised other automatons, retaliate for the destruction of your automatons or (and that one is AWESOME), share your teamwork feat as a swift action with your automatons.

And oh boy – they are rather versatile: From allowing your automatons to make the total defense action or repair oneself, reload ranged weapons etc. Supplies etc. need to be replenished and even riding the automaton via saddles becomes possible, as is the option to add catapults to hurl flasks. Have an alchemist-buddy? Well, your automaton can act as a minelayer, apply poisons, inject multiple potions at once or create a static shield of electricity that surrounds the automaton – which is btw. massively upgradeable. Have I mentioned the glorious one that lets the invention of a high-level pugilist move up to its speed and trip and sunder everything in its path 1/day, combinable with other inventions for even more pain and insult to injury?

The pdf also provides us a short FAQ as well as some sample invention-progressions.

As I’m seeing myself often complaining about the lack of support for 3pp-classes, sometimes in their very own books, this massive array of customization options is a joy to behold and makes for some massive options.

Have I mentioned the three exceedingly cool capstone abilities?

Editing and formatting are top-notch, I didn’t notice any significant glitches or typos while reading this pdf. Layout adheres to Interjection Games’ elegant 2-column b/w-standard and sports some nice, thematically fitting b/w-artworks. The pdf is fully bookmarked for your convenience, though not with nested bookmarks.

These are good days to review classes, it seems. I’m quite impressed with this tinker – author Bradley Crouch has created a delightfully complex class with multiple checks and balances that does some actually UNIQUE things – it’s not just an alternate summoner or akin to the machinesmith – it gloriously does something different and shows that is a labor of love, oozing excellent ideas and allowing a staggering array of customization options for your perusal.

One minor gripe I have would be that inventions that net proficiencies are supposed to net the respective items as well – something I consider slightly problematic in games where the money is tight – requiring the tinker to provide at least one base weapon (e.g. one bastard sword that can be used again if the automaton is destroyed) to be integrated into an automaton might be more prudent for certain groups, though I can see that being best house-ruled.

Let’s do the run-though, shall we? All in all, we get a VERY complex class with options galore, something to tinker with and create, a class that does not just copy existing builds but dares to do things differently. It’s funny, really – after Purple Duck Games’ Covenant Magic, I did not expect to soon give ANY class a good verdict – the offering just upped the ante that far. But this tinker here actually manages to climb to the highest echelons with a combination of great fluff, nice humor and most of all: Solid crunch galore. Reviewing it was a nightmare, though – it’s been ages since I had to do this much math to check for average damage etc. – mind you, the implementation when playing/building works much easier, though. While the first iteration suffered from some oversights, these have by now been mostly rectified and thus I feel justified in rating this 5 stars + seal of approval – well worth your money and definitely an advanced class that feels very unique and exciting.

Be a creator – and get this great class here on OBS or here on d20pfsrd.com!