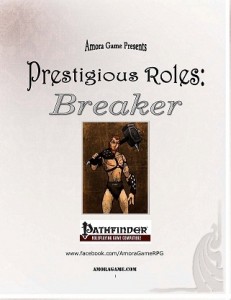 This pdf is 5 pages long, 1 page front cover, 1 page editorial, 1 page SRD, leaving us with 2 pages of content, so what do we get?

If you do have the Supporting Roles: Tinker-pdf by Amora Games, you’ll know the Breaker already – this PrC is essentially an excerpt of said parent-pdf

The Breaker gets d10, 2+Int skills per level, full BAB-progression and 1/2 fort and ref-saves.  The class’s idea is that of a more melee-focused tinker and its design shows, providing a controlled form of rage similar to the one of the barbarian, netting +4 to Str, Dex or Con, splitting them as he deems fit for 4+Con-mod rounds.

The Backswing Push-ability, which allows the breaker to make an additional attack at his/her highest BAB to push foes 5 ft. (10 on a crit) without said movement enforcing AoOs. The Hit and Run-feature is also interesting, allowing the breaker as a full round action to move up to his movement rate and make a full attack action for a -2 AC. That one is rather powerful.

When missing foes with their attacks, breakers may also make a sunder-attempt  as an AoO 1/round and follow up with a 5-foot step towards or around the opponents. Finally, at 10th level, the Breaker may divide weapon damage and edifice recognition damage between the sundered weapon and the foe wielding it.

Editing and formatting are very good, I didn’t notice any significant glitches. Layout adheres toa  2-column full-color standard that is relatively printer-friendly and the pdf comes without bookmarks, but needs none at this length.

While you obviously don’t need this pdf if you already own the parent-pdf, the Breaker remains an interesting sunder-focused PrC with some powerful, unique non-magical abilities to supplement the class. The PrC is solid and there’s nothing particularly wrong with it – hence, I’ll settle on a final verdict of a solid 4 star-rating.

You can get this PrC here on OBS and here on d20pfsrd.com’s shop.