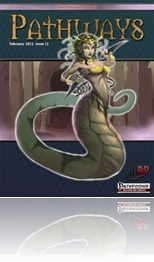 This installment of Rite Publishing‘s free e-zine Pathways is 48 pages long, 1 page front cover, 14 pages of advertisements and 1 page SRD, leaving a whopping 32 pages of content, so let’s check it out!

After the neat editorial by David Paul, we delve right into the action with the cover-creature and the sublime creature template (CR +2) by Jonathan McAnulty: Sublime creatures are immortal, positive-energy-induced creatures and the sample critter is AWESOME: Kallia, the Sybil of Eldorus, the medusa from the front cover, makes for a truly deadly (CR 20) foe – the sublime celestial greater medusa oracle 10 comes again with a great fluff text, an excerpt from a ballad and a tragic background story, a new magic diadem, new magic daggers and 3 monstrous feats. Kallia ranks among my very favorite creatures presented in Pathways. Expertly-written with a stellar full color artwork. Two thumbs up!

T.H. Gulliver, master of the #30-haunts-series delivers a cool article on the destruction of haunts and suggestions on how to make the experience sufficiently rewarding. A neat read that makes me hope for a horror-mega-adventure by T. H. Gulliver soon!

Creighton Broadhurst, mastermind of Raging Swan Press, presents us three sample cutpurses and thieves (CR 1/4 Urchins, CR 1/3 Cutpurse and CR 1 Skilled Cutpurse) and a neat general encounter to have the non-violent guys try to steal from the PCs, including terrain, crowd etc. and even a list of cool distractions. Nice!

The next article is once again by Jonathan McAnulty and is entitled “Sacred Sepulchers” – continuing the longest-ranging of support for ANY class released by a 3pp so far – the divine channeller gets channelling effects for the murder and undead subdomains and 3 sample sacred tomes. This particular article goes above and beyond, though, and offers a new skill use for diplomacy: Dealing with grief. Two new spells are included as well, one to temporarily induce a depression and one to temporarily remove the condition. As one with enough experience with the topic, I enjoyed the take on the topic, although I would love to see a more complex take on the topic of grief, sadness and depression, perhaps in an upcoming release.

We also get Moso’s Bluff, a fast, grimy intrigue-sidetrek set in Kaidan 8or any Japanese-style-setting) and feeling like a neat little urban noir adventure. Ron Lundeen, author of several adventures and most recently, mastermind of Run Amok Games (The first Run Amok-adventure, “Six Griffons Haunt” scored 5 stars…) presents us with a neat scenario based in the seedy Yakuza-infested underbelly between bakuto-parlors and tattoo-studios and makes use of the best Way of the Yakuza has to offer. This scenario alone lets me hope for an adventure anthology in Kaidan and look forward to Ron’s next offerings! As a DM, you have to check this one out, it’s an awesome sidetrek! Have I mentioned Tengu-archers and the blind bard?

Owen K.C. Stephens, master of crunch and one reason of the success of Super Genius Games, is next for a very interesting interview and an offering to aspiring authors.

Finally, in case you’re too busy to check up on them, the esteemed Dark_Mistress and yours truly both present their personal top-10 of third party products for the Pathfinder RPG released in 2011. If you haven’t checked them out, take a look – maybe something went under your radar.

Editing and formatting are very good, I didn’t notice any significant glitches. Layout adheres to the 2-column standard and the awesome artwork by Colby Stevenson of the greater medusa is stunning. The pdf has no bookmarks. Content-wise, this issue is absolutely AWESOME and blows most issues out of the water. The creature, the template, the advice on haunts, Creighton’s encounter, the divine channeller support and Ron’s excellent adventure all conspire to make this issue of Pathways my favourite so far. And it’s free. Have I mentioned that this is free? It’s worth every mb on your hard-drive and you should download this now. Final verdict. 5 stars and Endzeitgeist seal of approval. Great work!

Pathways 12 is available from: