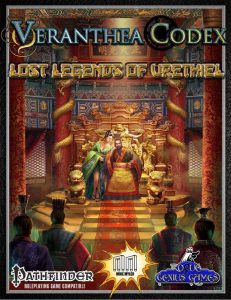 This supplement for Veranthea Codex clocks in at 42 pages, 1 page front cover, 1 page editorial/ToC, 1 page SRD, 2 pages of advertisement, 1 page back cover, leaving us with 36 pages of content, so let’s take a look!

Note: This pdf has only received a cosmetic face-lift, so the review’s pretty much unchanged. If you’ve read the old review, you’ll know what follows.)

So, what do we get here? Well, we get a massive, high-concept NPC Codex/bestiary with a WuXia-theme. From the mountains of Nestraka, the CR 8 Amigara hail, deadly constructs that encase mortals to use them to tap into the life energy of mortals entombed in their bodies – they can be found in the canyon of the spiral, which features a total of 3 short descriptive sketches to use in concert with the critter.

The pdf continues to provide the Fukujin subtype – native outsiders that embody the virtues of good fortune, with two such entities provided, both of which should put a smile on the faces of genre-aficionados: Benzaiten and Hotei, both at a nasty CR 15, make for powerful, benevolent entities. The Fire Naga at CR 12 comes with a new spell that is basically dominate on speed and the naga can generate enthralling, hypnotic orbs or fire…pretty cool and best take on the concept I’ve seen so far: In spite of the name, this is no one-trick-pony. Orang-Bati are CR 3 winged apes with a fear-inducing howl. Okay, I guess, but I’ve seen the concept often enough to not be impressed here.

Now the next critter made me smile from ear to ear: Horror-fans may know of the Orang-Minyak, the oily men – well, guess what? Now we get the guy as a neat CR 6 adversary with cool, connected abilities – two thumbs up! The Seong-Saman, the fan-lady with her aura of breathlessness, night terrors and ability to become corporeal is another critter at CR 5 I very much enjoyed to see here – and gaining one named iteration with mesmerist levels is a neat icing on the cake here. At CR 4, the long-tailed hornless goat sigbin may drink blood from the shadow of creatures (!!!) and is yet another cool critter that very much made me grin. The 3 magic items associated with the creatures just add more dimension to it and the notes for catching it make it feel as something deeply rooted in the mythology of Urethiel.

Tek-tek, undead upper torsos with an axe-blade where the lower body should be, with their vertebrae axe and deranged chittering is also amazing…oh, and they can be taken as familiars or companions via feats. Their previously slightly too high power-level has been adjusted to proper levels – KUDOS!! The three magic items (two axes, one set of bracers) are neat and evocative, though. I was positive surprised to see the tsuchigumo translated as a CR 10 aberration, with powerful webs and the horrid ability to create tsuchigo thralls via the CR +3 template provided.

Next up would be sample characters: a human druidess 2, a dwarven samurai 5, an elven pyrokineticist, a half-orc vigilante, a half-elven hunter, a forsaken human two-handed fighter, a blessed alchemist/ninja/monk-multiclass, a forsaken slayer, a halfling oracle and a shòuquán invulnerable rager/conduit are provided, spanning the CRs from 1 to 18. It should be noted that, where applicable, companions are included in the stats. Amazing for guys like yours truly: This pdf features an artifact…that is the Death Note. Not kidding. Could your PCs have bested Light? It’s time to find out…

The pdf also sports information on a unique city – Tian-Ti Ang, the city of vampires! The place not only comes with a settlement statblock, it also features notes on the houses, the local laws and rivalries and conclude the pdf on a high note with a deadly vampire ninja at CR 12.

Editing and formatting are very good, I noticed no glaring glitches. Layout adheres, for the most part, to a two-column full-color standard, though the pdf switches this up with one-column passages where appropriate. The artworks, for the most part, are public domain, but fit the theme, with some stock thrown in – the new cover is certainly nice. Like all Veranthea codex books, this book is chock-full with information, but doesn’t feel as jammed and busy as previous books, which is a good thing in my book. The pdf comes fully bookmarked for your convenience.

Luis Loza’s Lost Legends of Urethiel deliver in spades: The critters, for the most part, are creative and drink deeply from the wellspring of lesser known pieces of mythology. The NPCs are similarly diverse in their builds and feature some characters that make good use of Urethiel’s unique birthrights. More importantly, this pdf left me with the DESIRE to actually use quite a few of the creatures herein. While the lack of artworks for the critters is always a bit of an issue for bestiaries, if you are not solely focused on that component, you will love A LOT of the critters herein: Instead of doing the standard Yuki-no-onna, penanggalan-routine, this instead opts for creatures you haven’t yet see hundreds of times. In short – this is a great, fun supplement. While not all NPCs are genius or that creative, the critters are creative and fun and so are many of the NPCs – as a whole, a supplement well worth getting, making me settle on a final verdict of 5 stars, just short of my seal of approval. Oh, and the feats being cut down to size with the new artwork just represents the icing on the cake! Get this!

You can get this cool collection of critters and NPCs here on OBS!
Endzeitgeist out.