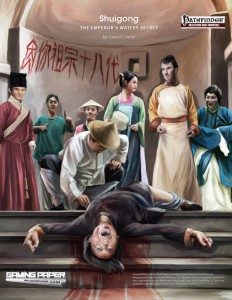 This module clocks in at a total of 16 pages, minus 3 for the editorial etc., leaving us with 13 pages of content, so what do we get?

This module was moved up in my reviewing-queue due to me receiving a print copy of this book at Gencon.

The world of Orbis is one where steampunk influences abound, thanks to a special type of wood called scaldwood, which allows for the cleaner and more efficient generation of steam. Situated on this world, there is a nation roughly modeled after China – the Ten Thousand Scales, where the truth about the function of scaldwood and the actual use of steampunk-y technology is a jealously guarded secret, kept by advisors and bureaucracy from falling into the hands of the public, with the scheming at court keeping most issues far away from the emperor’s notice. The PCs are contacted by the bureaucracy to deal with a rather significant issue – with 5 sample traits providing justification for them being chosen. The traits generally are solid and have but one issue: They do not specify their trait type.

Where should they go? Well, the deal offered to them provides a HUGE monetary benefit to go into Shuigong, the eponymous and restricted access filtration/sewer/water-processing system.

Anyways, this module is intended to be used with Gaming Paper’s Mega Dungeon 3: The Sewers game aid, but does not require it – the final page is devoted to depicting the set-up of the gaming paper sheets, but also doubles as a map of the complex – player-friendly, in case you were wondering…

…and this is as far as I can go without SPOILING anything. Potential players will want to jump to the conclusion from here on out.

All right, I mentioned the huge reward before, right? Well, players should be skeptical and if they manage to get on the bureaucrat’s good side, they may gain some additional information: There is a monster hiding in Shuigong, and its body-count is rapidly rising. While details are scarce, public persons have been eliminated and the military had been sent in. To no avail. The dread “Beast Below” that has been causing the deaths in no monster, at least not in the classic sense of the word; rather than that, it is a man named Zihao, one born as a fourth son, but with serious magical talent. Emotionally and physically tortured by his brothers for the perceived favoritism he received, they sought to break his heart via a courtesan…and instead broke his mind. Zihao stalks the tunnels and has created a web of death below…one the PCs are now in the process of entering.

Shuigong is not a cosmetic backdrop – it is a proper environment: Pitch-black, slippery and potentially lethal, the place’s structure influences CMD and Acrobatics and you should definitely know what you are doing – high Dex-characters will have some chance to shine here.

Exploring the dungeon that is Shuigong is btw. an internally consistent manner – it makes sense from the perspective of the deranged mastermind as well as from that of the GM: The obstacles the PCs will encounter focus on crippling PCs, on generating slowly a means of decreasing their potency; from deathblade poison-covered hidden blades to the creatures – which deserve special mention: The first would be hungry fleshes, which not only are diseased, they also accrue growth points and regenerates when hit by the wrong type of weapon, making for basically a puzzle-foe from the get-go.

This level of imaginative potential has been applied to more critters – take the plasmic otyugh, which can change its shape when in water – the interesting component here being definitely that the creature does not need to adhere to the standard formation of creature space, allowing for a creative application of flexibility and interesting tactical options I have not seen executed in any other critter so far. Even skeletons with filed feet or amphisbaena can be found here and astute players will slowly notice a sense of cohesion, that something is amiss – and indeed, the whole structure amounts to a gauntlet to soften up the pesky adventurers. From huecava and necrocrafts, the PCs will need more and more resources, as they slowly make their way towards the darkness and madness of Zihao and his ghoul retinue…

Conclusion:
Editing and formatting are generally very good; while my print copy lacks some formatting among the statblocks (bolding/italicization), I have been told that this was cleaned up. Layout adheres to a printer-friendly two-column b/w-standard and the pdf sports several nice, original b/w-artworks. The print-version is a nice softcover. The cartography-overview page is solid and unfortunately, I can’t comment on any pdf-versions, since I’m not sure there even exists one.

Dan Comrie’s Shuigong is a nice, unpretentious, internally consistent dungeon crawl against relatively challenging foes that shows some sparks of brilliance and creativity among the builds for the adversaries; less so for the BBEG, but there is some true creativity herein. Considering the evocative twist on the classic sewer level trope, one can definitely consider this a nice module, particularly for slightly more experienced groups and convention play. While certainly not super-hard, it is definitely a potentially challenging module and I mean that in a good way. Not all encounters reach the highlight-level of brilliance, but for the brevity, the module does indeed deliver a fun excursion. All in all, a fun module – which is why my final verdict will clock in at 4 stars.

You can get this module, per the writing of this review exclusively, here on Gaming Paper’s shop!

You can get the massive mega-dungeon gaming paper aids for sewers here!