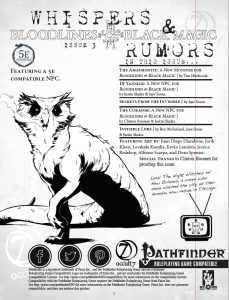 The third installment of the little ‚zine devoted to supplemental material for the amazing Bloodlines & Black Magic setting/campaign-hack/system-tweak clocks in at 21 pages, 1 page front cover, 3 pages of SRD, leaving us with 17 pages of content, so let’s take a look!

While the header and tags also designate this as 5e on my homepage, it should be noted that the 5e-material is just one character, and that this character has not been built with standard 5e-NPC-rules and acts as a kind of preview for the 5e-version of Bloodlines & Black Magic.

All righty, so, we begin this supplement with a new creature penned by Tim Hitchcok – the amaymonite, which clocks in at CR 5 (respectable, considering that BL&BM caps at level 7…) and comes with notes of dosh that may be collected, threshold DC, etc. – avatars of Prince Amaymon the Devourer, these beings are fearsome in melee, courtesy of their astral poison and the ability to bind the souls of those reduced below 0 hit points. They come with two options for the witch-class’s version for Bloodlines & Black Magic to make a pact with the entity – oh, and the critter comes with a cool artwork.

Justin Sluder and Jaye Sonia provide the second article – “DJ Yarrick” – or is it “Yannick”? The pdf can’t seem to decide which the correct name is. The fellow is a fey-blooded expert and comes with full stats, though I did notice a few rough spots here.

Clinton Boomer and Justin Sluder than provide a CR 12 (!!) encounter – the curator rose, which presents a truly dangerous art-gallery, including an intricate (and DEADLY) statblock and even some sample conversation tidbits to guide the GM. I really liked this one, and while the build does not include threshold or dosh information, the nature of the build and its themes make me chalk this up as intentional, and not as an oversight.

After this, Clinton Boomer and Jaye Sonia provide brief summaries of the people that came before humanity within the context of Bloodlines & Black Magic – from asura to the hollow ones and pack to the serpentfolk, some nice ideas are provided.

The final article is super helpful – it is penned by Ben McFarland, Jaye Sonia and Justin Sluder, and pertains to the Lords in Glass’s Shadow, and on how to use them. Three fully statted individuals are provided alongside b/w-artworks. One of these NPCs also comes with 5e-stats, though it does seem to heavily use custom rules of the upcoming 5e-version of Bloodlines & Black Magic. As presented, the values of the NPC deviate from what they should be per 5e’s default rules, but without the full 5e-version, I can’t well comment on whether the statblock is correct within the context of Bloodlines & Black Magic’s 5e-iteration. I couldn’t help but feel that 5e-stats for all three NPCs in this article would have been appreciated.

Editing and formatting are okay, given the very low asking price, though I seriously wished Storm Bunny Studios had more of a budget for these; a nitpicky editor could have polished the pdf of its typos (doubled plusses, etc.) and minor snafus. Layout adheres to a two-column b/w-standard, and the pdf comes with several awesome b/w-artworks. The pdf is fully bookmarked for your convenience.

I like what Tim Hitchcock, Jaye Sonia, Ben McFarland, Clinton Boomer and Justin Sluder created here – they all rank among the designers I consider myself to be a fan of, so no surprise there. While the hiccups among the formal criteria prevent this from getting highest marks, considering the low price and cool content, my final verdict will still clock in at 4 stars – if you like BL & BM, you will want to get this.