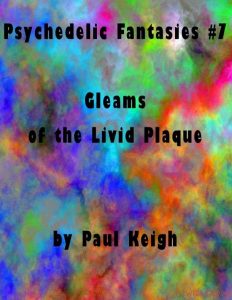 This module/setting supplement clocks in at 11 pages, so let’s take a look!

Yep, we get basically a fifth of a page editorial and the like – and then, the rest is adventure. This series adheres to a pretty minimalist approach to module presentation – two columns of black text in a white background. Headers are bolded, but the small statblocks have no internal formatting – this is as minimalist as can be. As for the rule-set, the module does not subscribe to a particular OSR-game or edition, claiming general compatibility, which means that you will have to do some tweaking to modify the module for your preferred old-school game. 60’ (20’) are the default movement rates, HD are noted, and AC is provided in the descending convention; the monsters state a single save as a static rating, and note e.g. “diffuse – receive only half damage” or “climbs as spider”– you get the idea.

As in all psychedelic fantasies, this has only the strength of its prose to lean on. This is also a sandbox without a clearly indicated target level, but low-level to mid-level parties should have a good time here, since this module is less about murder-hoboing everything, and more about the wonder of exploration. What’s inside is less of a straight-forward dungeon.-crawl, and could be likened more to a setting supplement depicting an environment to explore. You can, of course, attempt to purge everything with fire, but that doesn’t offer the most satisfying means of using this one. It should also be noted that this is the most “inorganic” of the psychedelic fantasies penned by the author – it does not mutate or change to the same degree as the other complexes, and generally has a starker tone; the factor of survival is a bit more pronounced herein. This is not a per se easy adventure location to traverse and is a tad bit tougher than e.g. “Streams of the Lucid Crack” due to this module’s environmental effects being more dangerous; on the plus-side for the players, it does not feature save or die. While crippling and disfiguring can result from exploration and combat, the module, as a whole, turns out to be a pretty fair endeavor.

There is a rudimentary map on the final page, which depicts a side-view of the livid plaque, no player-friendly version is provided. The layout of the complex may take a bit of getting used to, and wrapping your head around, but as a whole, I considered it to be a pretty interesting complex, to say the least.

There is one more thing to be noted, and that pertains the rules – there are 3 specific spells included, and they lack indicators for the classes they’re supposed to be for, suggested spell-levels and the like, potentially requiring some tweaking – probably due to the supplement not subscribing to a specific rule-set. These spells note range and duration just fine, butt to navigate the livid plaque, the PCs will want to use them – animate/deanimate mineral, open/close calcis and incalcify/excalcify allow for some pronounced modifications to the complex itself, which is very much intended, so this time around, there’s no bypassing the spells or ignoring them – they should be adapted to your favorite rule-set.

Another structural peculiarity herein would be that there is some overlap between this adventure and “Streams of the Lucid Crack” and “Dreams of the Lurid Sac”, not in concept, but in the stats/abilities and features exhibited by the creatures within – the Drevok are pretty similar to the Drevod from “Streams of the Lucid Crack”, for example – a few adjectives and minor tweaks have been employed, but as a whole, they’re very similar – not copy-pasted, but pretty darn close to it. That being said, this may be intentional to evoke a sense of “familiar, yet different” for those who explore more than one of the author’s locations/modules.

There isn’t much of a plot per se to be spoiled here. This is a classic sandbox, very much all about adding players to the mix and letting them explore the strangeness, but since said strangeness is part of the fun, consider this to be a SPOILER-warning for potential players; only referees should continue reading.

The file includes a d6 table of suggestions where the general location, the Void the holds the plaque, can be found, and a d10 table of things you may have heard, the place has to explored to be believed. The livid plaque is a transreal growth of mineral calcis clinging to one wall adjacent to the Void; as a layered structure, the plaque contains growing and diminishing pockets subject to the pressures of the plaque’s layers, with outermost entry-vectors for the PCs being possible via the use of the so-called galleries.

Much like in “Streams of the Lucid Crack”, this strange place is inhabited by a plethora of different, strange creatures, which may be likened akin to several factions: The “Media” and the “Glimmers” represent species that have adapted to life in the calcis and contain 4 different species; the second faction sports 3 species, and has arrived due to the plaque’s growth negatively impacting some components within the Void – these are the “Purifiers”, who want to remove the plaque. Finally, there would be the “Scenders” – entities that have reached the plaque by climbing up or down. 4 such species are provided. Finally, there once more would be two hybrid entities to be found here.

Sounds familiar? Well, I did claim that these modules have similarities, right? We have also have some dressing tables and quest generators – the intelligent species of locals and the Purifiers both get their own sample d6 quest tables, and both also provide a d6 table of gifts they may award for furthering their agenda. Speaking of items and creatures – there are two additional creature entities as optional appendices, an additional item generator, and a name generator that allows you to quickly generate names for spaces in the plaque with 3 1d60 tables. Structurally, this adheres to the same design-paradigm.

That being said, the plaque does feel very much different from the other modules; this is achieved via a variety of tricks: For one, the plaque’s structure is different, and the importance of the new spells to navigate this smoothly sets it apart. Secondly, it feels like being caught in almost a tectonic kind of shift – the plaque is not in a kind of equilibrium – it changes and while growth mechanics are provided, the place feels harsher – also because several key-locations can collapse and be destroyed. Species may become erratic, and the PCs may witness an exodus of species, warfare, etc. – all as the strange an uncaring mineral layers evolve, uncaring. Similarly, I mentioned a survival aspect. These are mainly enforced by the nasty global effects of the calcis – navigating the plaque is a dangerous endeavor, and damage incurred from the terrain may see the PCs impregnated with calcis, which will uncaringly start destroying body parts over several days! This provides a reason to interact with the species within, to learn the new spells, and to make sure that you’re careful. It creates a notion of a hostile, uncaring and structurally-unique wasteland, making the exploration feel genuinely unique. It’s a small thing, but the plaque’s structure and environmental effects, its dynamic nature – all of these do make this adventure stronger than e.g. the “Streams of the Lucid Crack” as far as I’m concerned. I have literally never seen any module like it.

Paul Keigh’s exploration of a strange, layered and calcified thing overlooking a grand void is genuinely a novel experience. In spite of its structural similarities with the other psychedelic fantasies the author penned, this is unique and distinct. I wouldn’t advise in favor of running it in the same campaign as the other two, but I’d genuinely consider this to be a very fun and exciting little offering. If you can look past the rudimentary presentation and adapt the spells accordingly, you’ll have a definite winner on your hand. As such, my final verdict will clock in at 4 stars.

You can get this surreal, cool environment here on OBS!

Enjoying my reviews? If you do, please consider leaving a direct donation or joining my patreon!