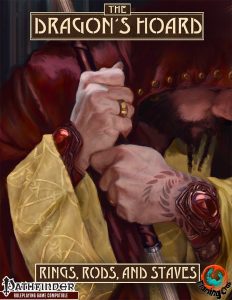 The second of Flaming Crab Games’ magic item-pdfs clocks in at 12 pages, 1 page front cover, 1 page editorial, 1 page SRD, leaving us with 9 pages of content, so let’s take a look!

We begin without much ado with 16 new rings – and ALL of them receive their own b/w-artwork – with one exception that has a black-red-artwork…don’t know why – I think the b/w-version would have been a better aesthetic choice there…but I digress. The first ring is a winner: Anchor rings look like a bland dimensional anchor spell in a can…until you realize that you can throw your magical anchor at a creature who already teleported away. The target may have full concealment, but if you do hit, you’ll drag the being back! Now that type of modification is what makes an item stand out. Nice!

Bands of Bortherhood are twinned and allow the wearer to know the location of the other as per status and add +1 to atk when both are flanking the same creature…which is pretty boring. The coil of vibrant ash at 45 K…is a bit underpriced. Not only does the wearer blow up in a 15d6-explosion if slain, on a melee crit, thankfully only 1/day, the ring adds a DC 20 disintegrate as insult to injury. There would be a serpent ring that fortifies versus poison and that can uncoil and inflict minor Con-damage (should be codified as poison for immunity-interaction, which it RAW is not) or a generally nice ring that lets you shoot blinding goo…with the issue being that it can be used an infinite number of times per day – for 4K, that is much too strong, considering that the item allows for no save!

Really cool: Gossiping rings let you whisper to the ring, point to a target…and then the ring pops up there, allowing for stealthy conversations perfect for intrigue-heavy games. Rings that generate telepathic bonds are nice, but e.g. a ring that nets you a bonus to AC and saves…is pretty much the definition of filler, as are skill-enhancing rings. A set of 3 rings, all worn in one slot on one hand that nets planar adaptation, though? Nice and makes sense, though weirdly, its text refers to a medallion…so do they also occupy that slot or not? I assume the latter, but I’m not sure. Horrible: a ring that replaces a barbarian’s rage with monk class features. Not only outclasses it monks (granted, not hard), it fails to translate limited daily resources properly: No rage left? Put on the ring. *shakes head* A ring that glows when near goblins…is lame. On the plus-side, a one-use ring that deals damage as an immediate action when the wearer’s reduced to 0 hp, healing him? Nice one! Rings that contain a magical garrote are cool…but the justification for allowing its use more often than a usual garrote would be allowed for is flimsy at best. A ring the extends Wepon Focus to a group of weapons is nice.

10 rods are up next, with the first being pretty cool: Capable of fanning out, it can make ray spells fan out into cones and cone-spells narrow down to rays. While there is a kminor typo here, the wording generally is pretty precise…oh, and no, spamming disintegrate through it won’t work. That being said, the transition from ray to cone is not perfect: rays that allow for a save become opaque: Is it the new Ref-save and the original save or just the new save? A rod that summons forth insects that eat dead flesh is nice to get rid of evidence. Dragon breath duplicating rods erroneously refer to “electric” when it should be “electricity”. Rods of elemental whips have cool visuals – but the air-version has a problematic option, providing potentially infinite charges,1 per hour, for technological items while touching them. Rods of enhanced summons are broken: 3/day as a swift action, cast a spell on a summoned creature. No casting duration-caveat, no spell-level caveat, nothing. Flavor-wise nice: A rod that lets you spell out a name, summoning yeth hounds that then proceed to hunt down the target. There would also be a truth-compelling rod that acts as a mace and minor skill enhancer. Amazing: There is one high-priced rod that can only be used by paladins: When the pala uses it, he’s obliterated…but so is any nearby creature under the effects of smite evil. I’m pretty big on palas and heroic sacrifices…so yeah, amazing.

The pdf’s final section features a total of 6 staves, most of which are pretty basic spells-in-a-can with minor bonuses, though two deserve special mention: The staff of relativity has an hourglass that can generate AoE haste…but after the duration elapsed, it’s AoE slow! I love the visuals and the minimum charge required here – very cool. Similarly evocative: The staff of self-loathing can make a target perceive one an illusory version of the target, which attacks the target whenever it attacks, inflicting the same amount of damage as the attack on a hit. These two staves stand above the others and really got me thinking.

Editing and formatting are excellent on a formal level. On a rules-level, some objects could have been tighter. Layout adheres to a relatively printer-friendly two-column color-standard. The pdf sports an impressive array of awesome b/w-artworks for the items. Kudos there! The pdf comes fully bookmarked for your convenience.

In short: This is pretty much the epitome of a mixed bag. While there are more items in this that left me cold and unimpressed than gems, the gems that are here shine very, very brightly. Considering the low and fair price-point, I will hence settle on a final verdict of 3.5 stars, though I can’t round up for it…if some of these captured your imagination, this is worth taking a look at.