The Genius Guide to the Talented Druid (Patreon Request)

The Genius Guide to the Talented Druid 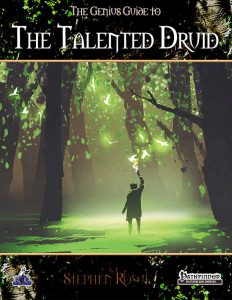 This massive supplement clocks in at 60 pages, 1 page front cover, 1 page editorial, 1 page ToC, ½ a page blank, 1 page SRD, 2 pages of advertisement, 1 page back cover, leaving us with 52.5 pages of content, so let’s take a look!

This pdf was moved up in my reviewing-queue at the request of my patreon supporters. Also: Samhain’s approaching. 🙂

To briefly recap, since it’s been a while: Rogue Genius Games’ talented class reworks are an interesting and handy option to have for many groups; the idea is to redesign a given base-class and codify all those alternative abilities and a archetype features in a unified frame; in some ways, one could argue that talented classes behave more like PF2 or SFRPG options than classic classes. The series’ ambition is to codify all of these abilities and put them in one of two ability-categories – the first, and more “valuable” would be the edge, which usually sports a pretty strong direction for the implementation of the class. The second is analogue to what we know from most classes – the eponymous talent, which now includes all those class abilities that you previously simply got, even though you didn’t necessarily want them.

The result, obviously, would be an extremely flexible and highly customizable take on the respective base class, which can allow for class concepts that wouldn’t otherwise be possible: IN my current game, I, for example, have a talented witch (a sentient voodoo doll), who uses Charisma and spontaneous spellcasting, and who specializes in delivering spells etc. via his hair, as well as on gray necromancy. The system immanent downside to this flexibility is readily apparent: The respective player needs a higher degree of system mastery…but then again, PF1 has been around for quite some time, so I kinda expect you to be capable of handling this component. The respective class components note their origins for reference in brackets, which can be rather helpful, but I’ll get back to that later.

Okay, that out of the way, the talented druid has d8 HD, 4 + Int skills per level, ¾ BAB-progression and good Fort- and Will-saves.: Druid’s language options include Sylvan, and Druidic is gained as a bonus language. The class is proficient with club, dagger, dart, quarterstaff, scimitar, scythe, sickle, shortspear, sling, spear, as well as with all natural attacks gained through shapechanging, as well as with light and medium armor and shields (except tower shields). The druid may not wear metal armor or use metal shields, and doing so causes the class to lose spells, SPs and SUs granted by the class for 24 hours.

The talented druid begins play with 4 edges, plus an additional at 3rd level and every other level thereafter; additionally, 4th level nets an edge. These include e.g. alien form, spellcasting (yes, you have to explicitly choose that!), animal companion (ditto), the feral shifter’s animal focus, bite or claw attacks (which include values for Small and Large druids as well), familiar, favored terrain, inspiration, the ability to use metal – you get the idea. Abilities like greater wild shape or chimera form are locked behind appropriate minimum levels, and if you want, you can have grab with your bite attack from level 1 onwards – you just, obviously, have to have the bite edge. Getting Psychic Sensitivity and psychic spellcasting is possible as well, provided you have spellcasting in the first place. Orisons must be chosen explicitly, and rage (the non-unchained variant) is a possibility. Higher level options include quicker summons, though here, I’d have appreciated the rules explicitly stating how the summoned creatures behave when called (“summoning sickness”, to burrow a term from Magic: The Gathering – yes or no?). I am not 100% happy with all choices made here – with just the claws edge, you can have rend as well, as soon as first level, which can be a brutal. Spontaneous domain casting, studied target and traps are included here alongside more skills or hit points. Wild shape can be taken as soon as 4th level.

Now, I mentioned domains, and it should be noted that these don’t just behave as the talented cleric’s take on the concept, instead having, like animal companions, their own appendix devoted to them, including massive lists of terrains, sources, etc. Now, it should be mentioned that the druid domain options tend to be somewhat less potent than those of the cleric, which is a good thing as far as I’m concerned, in light of the considerable power of the druid class even before becoming talented and allowing for cherry-picking. That being said, if your game tends to gravitate towards the upper power-echelons, fret not, for there indeed is a sidebar that helps you use both in conjunction with each other. Alternate domain options have been included, and for the sake of facility, we also get a spell-list with spells by level first, and then by school second – the list has been compiled from the sources up to and including Occult Adventures.

The druid also receives, as touched upon before, a resource called “talents”, which is used to further customize the class – these are the usual class features that have a slightly less pronounced impact on the overall direction of how the class plays, and in quite a few places, they have been taken and adapted in a salient manner – to take the first example “A Thousand Faces”, which generally makes for a somewhat underwhelming higher-level option, this one can be taken as soon as 6th level. At 2nd level, you can elect to become amphibious, or take the arctic druid’s Arctic Native feature. Shifting and tweaking of elements, favored enemies, communion with the spirits, upgrading companions to be undead, limited inspire courage. It should be noted that poison immunity has been tweaked, as now, only the augmented form ability (taken from the Naga Aspirant) has access to it as part of the mainstream class array; this, and the serpent domain, which gains poison immunity at 6th level, are the sole means to get this particular immunity – which seems like a sensible decision to me. It should be noted that, e.g. the mountain druid’s immunity to petrification may be found.

In case all of these options threaten to cause choice paralysis, fret not, for the series’ “Save vs. Wall of Text”-sidebars provide categories that help you navigate all of these options. Want to know what’ll net you resistances/defensive options? Take a look at the section. Want to know which talents net terrain-related improvements? Check out that list. Nice. A similar list has been provided for the edge-section as well, just fyi.

So, all cool? Well, there are a few things I didn’t like as much. 14th level is empty, for example – you don’t get anything cool, and just an additional spell of a spell level you already have access to, which *may* be a glitch, as several edges and talents reference 14th level as the minimum level. 16th level suffers from the same issue, but does not have the same prerequisite references, and that level, plenty of scaling class options improve, so it’s less of an issue there. 18th level is the final dead level. I am not sure if the class table is simply missing something, or if this is intentional, but as a whole, I dislike dead levels big time. A new level should always provide something cool.

Editing and formatting are very good, I noticed no serious glitches on a formal or rules language level. Layout adheres to Rogue Genius Games’ two-column full-color standard for the series, with stock artwork used throughout. The layout has pretty massive borders, but considering the density of the massive supplement, you’ll still have a ton of material herein. The pdf comes fully bookmarked for your convenience.

I do not begrudge Stephen Rowe his work on this series of books. As much as I enjoy the talented series, working on these class supplements is a TON of work, and not work that’s pleasant or interesting, but serious WORK. Capital letters. As such, it is a joy to see the fruits of this labor pay off, and in many ways, I consider the druid in its talented iteration to be a success. At the same time, there are quite a few of the combinations herein, where I’d have added in a minimum level – rend, for example, is imho not something 1st level-builds or 1-level dips should be able to attain this easily. My second gripe with the class, is one of an aesthetic nature – dead levels. Those should imho just not be there.

Apart from these two complaints, I found myself thoroughly enjoying this talented class, which is why my final verdict will clock in at 4 stars.

You can get this massive, talented class rebuild here on OBS!