EZG reviews Secrets of the Gunslinger

Secrets of the Gunslinger 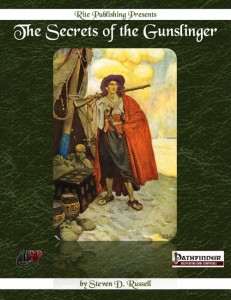 I have to come clear with you. I love the Gunslinger-class. Even if the rest of Ultimate Combat was a festering pile of crap (which it isn’t, though it’s a bit subpar for me), I would still have bought the book. Why? Because I’m a raging Roland of Gilead fanboy. The Dark Tower Saga with its stunning conclusion ranks among my favorite works of fiction and black-powder-using characters, from musketeers to swashbuckling pirates have long been a staple in my homebrews. My own solutions to the special qualities of guns (making them essentially unstable, but very lethal – I used exploding dice) provided ample fun for my roleplaying group and the complaining on the boards about explosions, unreliable weapons etc. is something I simply don’t get. For me, that’s the point. The release of the gunslinger saw the awesome grit-mechanic which felt like a godsend to me: Especially the dramatic action-grit-regain rule is an awesome tool for the DM to exercise a limited control over the grit available while at the same time providing an awesome in-game incentive for the player to go beyond “I shoot foe X” and rather fight cinematically. That being said, I’m very glad that quality-3pps have taken it upon themselves to expand the options for the new gunslinger-class and was thus looking especially forward to reading this particular pdf. Without further ado, let’s check it out!

Ahrrhhhh, me hearties, thar first be introduced to tha archetypes and tha buccaneer of black powder – a swashbuckling, gangrenous sea-dog o’ tha meanest kind. Though tha buccaneer may be not as fidgety like a monkey in tha trees, old salts know where to put tha lead when tha scurvy land-lubbers step out of bounds. Dontcha quiver at my reputation, ya sniveling squeaker, I know me’s a good intimidating bastard, but just ask the wenches in any port, I always care for tha ladies and in no bar brawl have I hurt a wench…but plenty of other sea-dogs. Ahrrh, mah rum’s empty, tell ya what, get me some more, will ya? And who’s you? You’re from the lands of jade, aren’t ya?
(The buccaneer gets rogue tricks, social skill bonuses, can exploit hindered enemies, grants morale bonuses and is a master of improvised weapon fighting.)

Indeed, like the dragonfly taking flight for another lily-pond, I have ventured far from my ancestor’s lands to perfect my studies as a fire-artist, for while you only dabble in the true power and enlightenment offered by the way of the gun, I have devoted my studies to the perfection of my mind and body – and as a result, my aim is like a calm sea: I can see the currents beneath the surface. Have you seen the hole in the warehouses walls? Your accuracy may be fine, but if I choose so, my shots can be just as efficient and cover an area similar to one of your ship’s cannons, leaving a path through any line of foes. But I sense a presence over there…lass, you do have a…distinct presence.

(The fire-artist gains zen-like abilities, gun-kata-style abilities and a cool final ability that hits all foes in a line up to a certain distance, ref negates)

….I usually wouldn’t speak up. But since you asked. They tried to burn me at the stake more than once. Ignorance breeds fear and my bullets not only penetrate the flesh, but also a target’s soul, cursing any who stand against me. My…abilities, similar to what you’d consider a witches arts, also perpetuate these unfortunate incidents. You see, sometimes silence is golden.

(Hexslingers get access to hexes and the ability curse their targets with curse-descriptor spells.)

You are all somewhat spoiled by the ready availability of black powder in your lands, fellow adherents to the way of the gun. The benevolent, but conservative master of my land abhors black powder and has subsequently banned all such weapons from our lands. But necessity breeds ingenuity and, while more modified than your specific paths, we have found our own way to the arts you adhere to – we are wandslingers, following a similar path to yours that is nevertheless different from your respective takes by focusing on wands. But enough about our differences, here’s to our common discipline! While we’re waiting for our beverages, what special tricks have you acquired during your travels?
(The wandslinger is the most complex of the 4 new archetypes, coming with 5 new deeds as well as rules for using wands with the gunslinger base-mechanic – cool idea for black-power-less campaigns. The restrictions imposed on wands as well as the smart, yet easy to grasp design make sure that the wandslinger remains a balanced character choice, while maintaining the unique mechanics of the gunslinger base-class.)

After these 4 archetypes, we are introduced to a variety of new feats and they don’t disappoint – from the option to dabble in gunslinging via Amateur Gunslinger, to signature weapons and specially anointed ammunition to wildly riocheting shots and even the option to cause misfires to deflecting melee attacks with shots – many of the iconic feats we know from literature and cinema can now be accomplished by gunslingers via their grit. This includes the ability to accurately perceive firearms (a kind of bodyguard’s/bad-asses glance), a special attack against foes (or oneself) that acts as a kind of lesser coup-de-grace, the ability to deliver shots that disfigure your foe (grudge-battles, here we go) to an epic feat that lets you take one last shot to turn the tide of battle when you die to the extremely iconic ranged kata and pistol whip feats to the ability to, yes shoot bullets (and other ranged attacks) out of the air and the iconic western-stare-down at high noon, we get a vast variety of cool feats that ooze both style and utility.

“Interesting tricks” said the mysterious woman who had been rather reluctant to chime in prior to the direct address of the fire-artist, but I have to go now. You see, there is a gunslinger out there whose anger has surpassed even death and he’s supposed to be out there…perhaps looking for the likes of us. And we provide a tempting target with our little chat. With these words, she left and a scarce 20 heartbeats later, a shot echoed through the night. But whose name the bullet bore, none knows.

Finally, the beleaguered DMs out there gets the Gun Wraith (CR+2) template to add to NPCs and monsters, for those cases where you just need an undead, gunslinging monstrosity.

Conclusion:
Editing and formatting are very good, though e.g. in “Shoot the Bullet”, benefits and prerequisites are not printed bold. None of the minor glitches impeded my enjoyment of the pdf, though. Layout adheres to the full color-2-column standard, artwork is stock and fitting and the pdf comes with no bookmarks, which is a bit of a downer on the comfort-side. If the hammy IC-narrative I wove into the review was no indicator, let me spell it out for you: I LOVE the gunslinger-class. I really do. It should come to you as no surprise, then, that I really did enjoy this pdf as well – author Steven D. Russell provides us with ample options for the gunslinger, going so far as to make it even possible to play gunslingers in non-black-powder campaigns!

With regards to the feats, I usually ask myself whether a feat is overpowered, whether it would make sense to take the feat in game, whether it offers something new to me and whether it offers some cool options that MAKE me want to use them. I’m happy to report that all of the feats herein passed my criteria and the template is the icing on the cake. 4 well-written archetypes, a whole smattering of feats that ooze style and a cool template – in the end, not even the lack of bookmarks and minor glitches managed to impede my thorough excitement about this pdf. Even if you hate the gunslinger, the wandslinger makes for a compelling alternative to let you salvage the concept for your game. My final verdict will be 5 stars and the Endzeitgeist seal of approval. Even if you don’t like the class, this might still be a 4-star pdf.

P.S.: No, I won’t annoy you with badly-written IC-prose in my upcoming reviews, though I’d like to know whether you enjoyed my meager attempts at framing the contents. 😉