EZG reviews Secrets of the Oracle

The Secrets of the Oracle 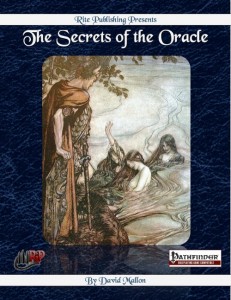 This pdf is 14 pages long, 1 page front cover, 1 page editorial, 2 pages of advertisements and 1 page SRD, leaving 9 pages of content, so let’s check out the new material for one of the beloved classes from the APG!

The pdf wastes no time and kicks off right away with 6 new mysteries for the oracle class. Unfortunately, the first mystery hits a pet-peeve of mine – I like classes to feel distinct from one another and the arcana mystery is focused on scavenging from the arcane domains of magic and thus constitutes a mystery to which I have a distinct disinclination towards. Worse, the final revelation is overpowered even for the 20th level: It lets you cast spell always still and silent without adding to the level AND lets you omit ANY material components, even the extremely expensive ones. I also consider the revelations to be not perfectly balanced among themselves, ranging from gaining a wizard’s bond to minor skill bonuses. Next up is the darkness mystery, which suffers from similar problems: The ability to create Dark Duplicates feels rather strong, granting you a 51% miss chance, lasts oracle level + Cha-mod and can be used for cha-mod times per day. Worse, though is the ability to take Hide in Plain Sight and get rather major spell resistance when not in sunlight. Compare that with “Gain slightly superior low-light vision” and the ability to cast shadow conjurations and we’re again in for a mystery that just doesn’t feel too compelling.

Next is Luck. God, I HATE this mystery. The “Cut the Thread”-revelation, usable once per day, can be chosen without any level restrictions – make a ranged touch attack against a helpless opponent and (s)he gets a Fort save against 10 + damage (1d4+ oracle level) or dies – oh you assassin’s, hang your heads in shame and cry, the oracle will take your jobs! Insta-death is one thing that is RARE in PFRPG and good riddance for the design choice. This revelation is a step back. Have I mentioned the ability to gain half your level to re-roll ANY DIE ROLL?? This is broken, even at 11th level. Have I mentioned fatespinner yet? Grant 3+ Cha-mod allies an insight bonus equal to half your oracle levels to atk, initiative, and all saves. Usable for oracle level rounds per day, this buff is strong – too strong. And there is an ability that makes you immune first to poisons, then diseases and finally even curses. This, at least in my opinion, has nothing to do with luck and is rather powerful.

The Primeval mystery suffers from other problems, namely being too weak: Gaining lame natural attacks, improved vision and uncanny dodge does not for an interesting mystery make. The Rot–oracle per se would be a good choice for evil characters were it not for the Plague mystery from Open Design’s Divine Favor: Oracle book, which does approximately similar things, only in much more iconic ways. Just about when I was ready to call it quits on the mysteries, though, the ONE very well-designed exemplar pops up, the sound mystery: From auras of silence to the ability to propel yourself forward with a boom, the revelations are iconic and don’t feel over- or underpowered and can be considered balanced among themselves.

Then, there are 6 new curses and unfortunately, they suffer from much the same problems as did the mysteries. Bad Luck forces you to reroll natural 20s and progressively grants you bonuses to reroll and negate natural 1s, making it rather a curse of moderate luck. The simpleminded curse, which caps your Int at 10, lets you add your Wis modifier in addition to your Cha-modifier to all your save DCs at 10th level. This is BROKEN. The technical ineptitude curse is a minor inconvenience, providing a -6 penalty to craft, disable device and use magic device vs. scaling, improving bonuses. Not worthy of the moniker “curse” in my book. The same unfortunately holds true for the distracting voices-curse, which penalizes perception and concentration checks for a bonus against mind-affecting spells and a bonus to knowledge skills.

The pdf also provides 6 new archetypes, the ascetic, the entheogenecist, the crone, the mad prophet, the tribal shaman and the wanderer. The archetypes all come with their own bonus-spells and force you to take certain revelations. The crone feels with her hag-apotheosis not like something anyone would aspire to and more suitable for witches. While the revelations were nice, I am not convinced that they need their own archetypes. To be precise, apart from the iconic lotus-eater revelation, none of them felt truly exciting, novel or ingenious to me.

Conclusion:
Editing and formatting are very good, I did notice a tab-glitch and some minor punctuation problems, though. Layout adheres to a two-column standard and the stock-artworks are neat. The pdf comes with bookmarks. Oh boy am I underwhelmed by this pdf. Either the revelations feel very strong, unbalanced in their choices among themselves, badly conceived or just boring. The overwhelming sense of “meh” this pdf evoked in me never left and was only scarcely alleviated by some gems among what I consider badly balanced and/or boring choices. The curses don’t feel too awesome. The restrictiveness of the archetypes doesn’t make them that enticing either and in the end, I just don’t consider this pdf good. While I do like one of the mysteries and one revelation of the archetypes, this is not enough for me to recommend this pdf. Due to the low price, I’ll settle for a final verdict of 1.5 stars, rounded up to 2 for the purpose of this platform.