Secrets of the Tactical Archetypes 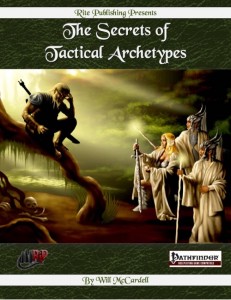 This pdf is 12 pages long, 1 page front cover, 1 page editorial, 1 page SRD and 2 pages of advertisements, leaving 7 pages of content for the new archetypes, so what exactly do we get?

Essentially exactly what we would expect from such a file – we get archetypes centering on smart fighting.

The first of the archetypes gives some direly needed support for the summoner base-class by providing the archetype of celestial commander, a kind of divine commander of good-aligned outsiders who does not have an eidolon, but gets access to divine spells and even domains. As an interesting mechanic, the celestial commander grants bonuses to his summons when he employs a low number of them, rewarding the player for not spamming x summons and bogging down the game while granting significant bonuses to both his summons and allies. An interesting archetype that at least looks well-balanced. I have not yet had to opportunity to see one in action, but I gather, the archetype should work fine. I do regret that there’s no evil counterpart for NPCs that demoralizes foes etc., though.

The next archetype takes the Cavalier-class and removes the mount from the equation, replacing it with commands that work as bardic abilities as well as the abilities to grant allies temporary HP and grant allies access to teamwork feats he has as a move action. A rather smart and extremely well-crafted archetype, this makes for a nice alternative o Super Genius Games’ War Master as a kind of fighter who leads from the front-lines.

The Mechanist Gunslinger-archetype takes the old trope of technology vs. magic we know from games like Arkanum and applies it to the Gunslinger-class, essentially providing 4 new special deeds that make him the dreaded foe of casters (dispelling shots, counter spell via bullet to the head etc.). He also gets the ability to disable magical traps as well as the ability to use his engineering prowess to improve his aim.

The Ranger-archetype of the Pack Hunter takes the tried and true Guy-hunts-with-ot-of-animals-trope and makes it actually work – better than the similar PrC from Necromancers of the Northwest. The wolves the pack lord gets gain teamwork feats, additional spells, shared spells and the cool ability to gang up on foes to devastating effect, culminating in a capstone ability that lets the pack tear asunder foes that have been hit by all members of the pack.

The Shogun is an archetype for the as of yet mostly neglected Samurai and gets 2 new ways to use resolve (via his bountiful resolve ability) and a very cool ability to grant allies move actions – truly something rather strategic and useful in certain situations.

The final archetype is rather interesting – the War Warder, a modification of the Magus base-class, the one class that hits hard and is rather fragile, is rather atypical in that it focuses on defense and has the ability to reposition foes on the battlefield via a force push, grant a protective aura to allies and even wear heavy armor at 7th level without spellcasting failure. The coolest ability, though, would be the chance to halt foes in their tracks and entangle them via eldritch chains when hit by the Warder.

Conclusion:
Editing and formatting are top-notch, I didn’t notice any glitches. Layout adheres to the full color, two-column standard by RiP. The artworks are stock, but fit the respective theme. The pdf comes fully bookmarked. This is an interesting pdf to say the least – several boxed texts provide illuminating comments on design decisions and the archetypes feel very distinct in their diversions from the base-classes, often taking the central mechanic and replacing it with something rather interesting. that being said, the Shogun and Mechanist felt rather singular in their focus and design when compared to the other archetypes – I would have loved to see a bit more complexity there, as the other archetypes aptly display author Will McCardell’s knowledge of the rules. I also would have loved some more love and mechanics for the notoriously hard to design and balance teamwork feats, as some of the archetypes utilize them better than others. That being said, due to the low price this is still a great recommendation for anyone interested in playing some kind of non-conventional smart fighting character, resulting in a final verdict of 4.5 stars, rounded down to 4. Were the two aforementioned archetypes more complex or if we had gotten more archetypes, I would have went 5. I’m looking forward to seeing more!