Quests of Doom: Cave of Iron 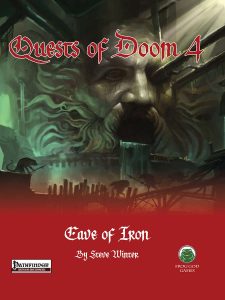 “Cave of Iron” is an old-school module intended for characters level 1st to 3rd – a well-rounded party of 6 is recommended, and at 1st level, this is a VERY deadly module.

It should be noted that the module requires that the GM pulls off something that every experienced player will be weary of; otherwise, it might well end before the intended finale, so yeah – this is certainly a module for experienced GMs. And parties. Oh boy, this is capital letters DOOM. Are you tired of your cocky, optimized PCs? Well, the final region has 10 minute intervals for random encounters, and these encounters can include 6 CR 4 creatures, and even one encounter with 14 CR 1, 8 CR 2, and one CR 6 (!!) critters – while one of the planned encounters lists this as not necessarily an IMMEDIATELY hostile one (they do turn hostile if the party dawdles), parties that think they can murder-hobo through this with their 3133T-murderhoboing builds will die horribly. It should also be noted that, while the numbers of critters encountered make this intent clear, the like is not spelled out in the random encounters section, so yeah – experienced GMs definitely required. The party has no chance of survival if they can’t level mid-adventure, and imho, even level 3 parties may well be hard-pressed to survive this one. You have been warned.

The module features read-aloud text, as well as b/w-maps for a section of wilderness and an adventure-location; the latter is aesthetically really pleasing and nice, but both maps come without player-friendly versions.

The primary antagonist comes with very rudimentary and pretty flawed depictions of making characters of that type; I strongly suggest ignoring the paragraph. Apart from the primary antagonist, we have two new monsters here – as a minor nitpick, an ability called “thought onslaught” should most definitely be codified as mind-affecting, as it does cause untyped damage. Another creature’s CMD is off by one, missing its special size modifier.

The module is set in the Keston province in the Lost Lands campaign setting, but is pretty easy to adapt to other settings. The adventure starts off in Hillfort, and nomen est omen here. 12 years ago, valuable metals were found in the hills in the vicinity, and the Hardshale Mine thrived – every month, a wagon train carries supplies to the mine, and returns laden with iron and miners, with the trip usually taking less than a week. It’s been 3 weeks and the last supply train hasn’t returned, and the riders that were dispatched when the wagons were 4 days overdue haven’t returned either, and more goblins than usual have been sighted – enter the adventurers!

To provide more details, I’ll need to go into SPOILER-territory. Potential players should jump ahead to the conclusion.

All right, only GMs around? Great! So, the first section of the module deals with the road to Hardhsale Mine after the short briefing. If the PCs are smart, they’ll take a friendly NPC along for the rid: A kind rogue can certainly help; the commoner minor, who is also an alcoholic, though? Less useful. En route, the PCs get to face several goblins (potentially gaining some intel regarding the plant monsters, like Jupiter bloodsuckers, which the PCs can also find.

And then comes the hard sell I mentioned, which really requires serious GM mojo to pull off – The PCs meet Pezzi Zakii, a friendly shroom-humanoid, who professes to be a kind being. Ideally, the shroom accompanies the PCs as a funny sidekick, “saving” them with his “shroom powers” over his own plant creatures. Conversation primers are also provided, and this’d be a more effective angle if, well, if shrooms were not one of the most classic OSR-villains ever. If your players played through either Expeditious Retreat press’ shroom modules or Matthew J. Finch’s fantastic Demonspore, forget about selling this one to your party. The module does not hinge on the party falling for Pezzi, but becomes more fun if they do. Here’s an issue: “It is vital, however, that characters don’t kill Zakii on the road.” While the shroom has 35 HP, making that unlikely, it’s certainly within the range of things that the party can pull off. On the plus-side, invisibility and sleep as prepared spells do make for a pretty likely chance to escape. So yeah, not penalizing the module for this one, even though I really suggest GMs taking some serious time to think on how to sell this.

Why? Because the module does actually a really nice job at making Pezzi seem likable, and the shroom, until recently isolated from the surface world, has a good reason to have free-willed adventurers around, wanting them to demonstrate how e.g. smelting iron works, etc. Still, some designated troubleshooting sections most assuredly would have been helpful here. The Hardhsale Mine, once the party arrives there, is the highlight of the module: Lavishly-mapped, the place features a ton of feeblemind-ed miners, deadly plant creatures (including a cool reskin of the assassin vine – the flowershroud), and with the magic-dampening witch grass hazard, the small mining settlement is atmospheric, dangerous and thoroughly creepy.

Of course, the PCs will need to go down into the Hardshale Mine – the mine has three levels, with the majority of the action dealing with the third level, where the mine managed to break through into the shroom’s habitat, thus initiating the catastrophe…provided the party isn’t TPK’d. A planned encounter deals with 5 CR 4 and one CR 5 enemy…which can’t RAW be bypassed. Hope your group is super-paranoid and good at hit and run…The final encounter with Pezzi Zakki and its minions btw. add +2 advanced violet fungi on round 1, 5 mandragoras (CR 4) and a green brain (CR 5) on round 2, a CR 3 fungoid on round three, and all surviving vegepygmies from a camp on round 5. These vegepygmies, btw.? That’s the 14 CR 1, 8 CR 2, and one CR 6 creature. Plus, you know, the CR 5 BBEG. If the PCs have not leveled by then, they will be wiped out at the very latest here.

Now, there is a room for super-deadly modules like this one; heck, I prefer hard modules. But this one is insanely brutal, and its level-range is hard to sell. I can’t see a level 1 party beating this; not even really overpowered groups. Level 2 will also be borderline – so yeah, wrong level-range.

But there is one aspect that really tanks the module for me. That final subterranean area, which constitutes more than half of the keyed encounters? Well, guess what’s missing its frickin’ map? YEP. The entire subterranean finale is missing it’s §$%&$§-map! And no, this is not intentional – the text references hexes, and the module certainly doesn’t waste time talking about the relation of encounter areas sans map, making it very obvious that a map should be here…but isn’t. How in all the 9 hells could that happen???

Editing and formatting re good on a formal and rules-language level. Layout adheres to Frog God Games’ two-column b/w-standard, and the pdf sports some nice artworks in b/w. The pdf comes fully bookmarked for your convenience. The cartography for the surface of Hardshale Mine is awesome and b/w – but that doesn’t make up for a) the lack of player-friendly maps (which Frog God Games usually provided) and b) THE FRICKIN’ MISSING MAP for the region containing half of the keyed encounters!!

The module has not one, but two bad strikes against it:

Both of these would be serious strikes on their own; the latter perhaps more excusable than the former; but in combination? In combination, they tank this module, and while the adventure, if run as intended as opposed to as provided, is a solid yarn, it isn’t outstanding, or novel enough to make up for these issues. My final verdict can’t exceed 1.5 stars, rounded up due to in dubio pro reo.

The OSR (for Swords & Wizardry) version can be found here.