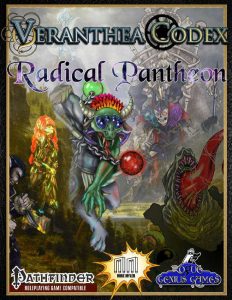 The revised edition of the massive first expansion for Veranthea clocks in at a whopping 123 pages (for this price-point!), 1 page front cover,1 page editorial/ToC, 2 pages of advertisement, 1 page SRD, 1 page back cover, leaving us with 117 pages of content – quite a lot, so let’s get to it!

In the first chapter, we get information on the respective deities – from ever sleeping Verahnus to Death and the Nightmare Gods – and, much like Inner Sea Gods, we receive information on the priest’s role in the respective society, aphorisms, holy texts, holidays, etc. – basically, we get the full fluff-write-ups, though, considering the comparably somewhat lesser page-count, obviously the entries are not as extensive as in Inner Sea Gods – still, what is here can be considered fun and sports information on (anti-)paladins for the respective deities. And yes, this includes paladins with an anti-chaos focus instead of the anti-evil focus, for example. Here, you’ll also encounter one of the major improvements of this revised edition: The book now actually contains obediences for each and every deity herein.

If you’re looking for full-blown redesigns of aforementioned classes though, you won’t find them here. As a nice nod towards the game’s traditions, we have a couple of Easter eggs here that should certainly put smiles on the faces of quite a few GMs: Death’s holy text, for example, would obviously be the Libris Mortis.

The flavor of these deities is excellent – I will e.g. never stop chuckling when reading about the deity of capitalism that puts a smiling face to the world, purporting to be LG when he’s actually LE. (And no, for your info – I am NOT anti-capitalist. Quite the contrary, actually.) Cool regarding new ideas: Wanna sell your soul for random mythic templates? Yup, possible.

The chapter is also suffused by pieces of crunch – nath, as a material, has a low chance of generating wild magic, for example. Another material, Kenta, temporarily becomes harder when it’s hit (cool mechanics!) and also increases AC etc. – that being said, for the copious benefits the material provides, it is underpriced. Streas, as a material, is also nice: It converts energy types, though it does confuse “Fire” with “Flame” in a minor hiccup. Wealb is slightly problematic – the material nets you a bonus to damage after being critically hit; while you can kitten the bonus, it is an ineffective strategy…but yeah, I think that could have used a slightly smoother design. There also is an interesting dust that allows for the substitution of Str for the key ability modifier of spellcasting – while I’m not a big fan here, the costs keep this in check. The pdf, while cleaned up in comparison to the first iteration, still features “page @@”-glitches here and there. Both Aleana and Andrletha now receive dedicated paladin-tenets for their knights.

On the plus-side: Studying some of the dread holy texts of Nightmare Gods can cause (conveniently hyperlinked) insanities – but also convey significant bonuses. The pdf now has a note on the recent emergence of psychic magic in Veranthea and a feat that allows cultists to infiltrate other churches and society at large…nice. Worshiping the dread Nightmare Gods can cause serious insanities and mutations for those foolish (or self-destructive) enough to heed their calling. 3 new occult rituals with slightly modified rules have been added for your gibbering delight, causing unpleasant insanities for your adversaries.

The pdf also sports a vast array of player options for the devout, beginning with Religion-traits. These traits generally are pretty powerful, but not in a way that would render then overpowered; as a cosmetic complaint, they should be denoted as subtype (Faith), but its trait subtype is evident, so yeah. For example, gaining +10 to Perception while asleep is interesting. Similarly, extending your darkvision (or getting it) a limited amount of times per day is cool.

The pdf also sports a selection of spells, and they are interesting in some of their concepts: Arcodivinity takes a whole round to cast and emulates an arcane spell of 4th level or lower from the magus or sorc/wiz-spell lists or a divine spell from the cleric/druid-list of 4th level or lower when cast by an arcane caster. This is generally a cool idea, but it should be noted that this has system-immanent hiccups the more spells you allow in your game, allowing for a very strong wild-card spell that may be balanced by the increased spell-level for all but ranger and paladin and the 1 round casting duration, but still – GMs should probably impose some limitations on spell-selection here. The revised edition now has a GM-caveat to acknowledge that, but still – not the biggest fan. In my game, with a ton of options, this will not show up.

Not all spells fall into this high-concept category – blazing insight, for example, allows for an immediate action reroll of Int- or Wis-based skill or attribute checks made in the last round and allows for rolling twice on the reroll. Other spells are pretty intriguing – divinely intoxicated is interesting: Double your spellcasting attribute modifier’s time, the target has to roll twice any d20 – and then use the results in the following sequence: Better result, better result, worse result. Capital Capitalist lets you haggle exceedingly well – but the reduced price may result in the merchant decreasing his starting attitude towards you. Forcing targets to reroll damage just caused may be okay, but more interesting would be Gift of Undeath – which provides continuous healing for a couple of minutes…and then slays the imbiber and resurrects him as an undead. Ouch, but it can’t be force-fed to unwitting dupes, thankfully…a damn flavorful for fanatic death-cultists! As a very minor complain, making the target “one WILLING living creature would be a bit more elegant for that caveat. Touch of the Alien has been properly balanced and is no longer a broken mess.

The pdf also contains an array of magic items, including a magical lantern and a theurgist’s mace – basically a mace that grants you the option to smite 1/day; if the character is a caster, he may smite 2/day spellcasters opposed to your tradition (i.e. arcane casters get smite versus divine casters and vice versa). If a character can cast both types of spells, the character may use the smite 4/day…but here, the update is a bit inconsistent: How does psychic magic interact here? Not 100% sure. This smite penalizes saves versus the wielder’s spells and SPs. Still, there are damn cool ideas here – an artifact-level blowgun flute? Yes! A coin that acts as a shuriken and lets you convert metal coins while also enhancing your Sleight of Hand? Yep, pretty awesome. Dreksler’s Unending Tap is pretty fun and allows for the conversion of fluid to magical beer. A whip that may petrify foes if they fail the low-DC-save…pretty neat.

The pdf also sports some archetypes – the divine drunkard brawler, for example. When these guys consume alcohol, they accumulate drunk points, which they then can expend to duplicate one of 3 randomly determined effects. The effects are interesting and generally make for a chaotic experience well in tune with Dreksler’s nature. The Holy Innovator gunslinger basically is a gunslinger who can utilize contraptions from the Veranthea Codex base book – nice. The paladin-archetype merchanteer is reprinted in this book, complete with tithed healing, magnetic channel and transformation to antipaladin. The Tian Ti-Ang Agent bard can be considered to be the heralds of the mythic vampire lords and as such receive an assortment of interesting vampire-abilities.

Then, however, one of the coolest chapters in the book begins – after the chosen template (CR +1), we get heralds for the gods – all of them! From an impossible slug swarm to more traditional executors of the will of the respective deities, these unique and powerful beings (clocking usually in at around CR 15) make for a truly inspired, interesting chapter and feature appropriate and cool unique tricks as well as information on planar allies available. The 3 immortal demigods of Urethiel, Boris and his entourage are covered/reprinted and we also get the CR 25/MR 10 Sciemaat the shattered, who seeks to repair the shield that once kept the nightmare gods at bay. Similarly, the last irrational Carambal can be found here. H’gal, the grand lich of Proxima Alterra (CR 17/MR 7), on the other hand, was a rather interesting penultimate critter herein. Oh, and the revised version now has full stats for Yawvil, master wizard of Vernathea: CR 37/MR 10. No, that is not a type. He is built with hypercorps rules and a hyperscore of 10, meganaut 2/hypernaut 2 – though you can run him as printed, this means that he does not use the default mythic rules.

Editing and formatting have improved since the original iteration of Radical Pantheon, but still are not perfect – I noticed a few glitches and relics here and there. Layout adheres to Veranthea’s two-column full-color standard and the book sports a vast amount of full-color artworks, with new pieces added in. The pdf comes fully bookmarked for your convenience.

Mike Myler, with contributions from Luis Loza, Michael McCarthy and Nicholas J. Giebel, has written a massive expansion here – and while there is some overlap with the content already featured in the Veranthea Codex, there still is ample material herein to justify the very low asking price for this amount of content. The revised edition of radical pantheon sports more information for all the deities, which means, ultimately, that everything feels a bit more concise, that the respective, previously somewhat neglected entities now also shine. So yes, radical pantheon’s revised edition is superior to the original iteration. At the same time, however, some of the new pieces of content, while thematically neat, can prove to be a bit problematic. In the end, the book has improved and thus warrants a final verdict of 4.5 stars…but I cannot round up for it.

You can get this nice sourcebook here on OBS!