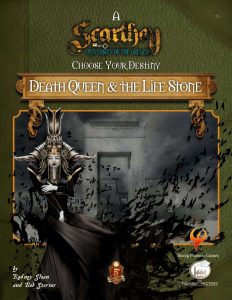 This module clocks in at 30 pages, 1 page front cover, 1 page SRD, 2 pages of editorial, 2 pages of advertisement, 1 page back cover, leaving us with 22 pages of content, so let’s take a look!

It should be noted that these page-numbers are provided for the single page version – there is a double-page spread version (better for e-readers etc.) also included.

Okay, so, this module is very different from my usual fare; it’s not just a supplement provided for the context of Rising Phoenix’ Scarthey setting – it’s actually a module designed to work as a GM-less solo-adventure for a 1st level fighter or cleric. It *can* also be run as a regular 1-on-1-scenario, but the primary presentation seems to be one intended for GM-less solo-play.

The module mentions the Stone of Ashirai – a mighty, dark artifact that can influence the difficulty of the module, providing one of 4 effects – this provides some replay value, and you choose one or roll for one before the module actually starts. Two are particularly brutal: One of the effects has vanquished foes potentially return to unlife on an 18+ on a d20, and the other makes you set aside a d20, with the 20 facing up. When an enemy rolls, they use the value facing up, and detract 1 from the value; when you defeat a creature, the value increases by +1, up to the maximum of 20.

For a further difficulty-increase, you can add duskin goblins as allies to the primary antagonists – the process of doing so is randomized, and the goblins’ stats are decent – while I noticed a few minor snafus (rules and formatting – HP are off by one, and feature headers are only bold, not bolded and in italics), you can use these. Formatting for other creatures tends to be off as well. Apart from that, DCs tend to clock in at around 10, with one instance missing the DCs – that one is called out in the errata notepad file, but as per my policy, only properly updated pdfs are taken into account. (As an aside: Why this policy? Because otherwise, publishers can point towards obscure homepages, form threads etc. and claim errata – and that is not customer-friendly.)

These aforementioned gobos do come with morale, which is a nice underutilized touch, imho. (One of the artifact’s effects can add a change here.)

The module then follows essentially a choose your own adventure-book style formula – we get read-aloud text, and after that some choices, with notes to go to other numbered encounters.

Now, unlike in my usual reviews, I will not talk about the plot or the like here – after all, I’d be spoiling the module for the GM-less solo-players that are the primary demographic. Testing the module, I should note that this is a pretty deadly beast – there are a couple of story-game-overs (traps’ll generally just kill you sans save), and the module sometimes uses skill checks where I’d have expected a saving throw – for example when a massive block of stone squishes you. After multiple failures to beat the module, I can discern the primary goal to succeed here: there is one encounter that can net you an uncommon ad pretty cool ally. This is perhaps the most crucial encounter to get, as it changes the action economy slant in the encounters with multiple enemies. I strongly suggest making your character hardy in order to avoid being one-shot by encounters with multiple enemies.

Don’t get me wrong – this’ll still be tough, but once you’ve found this one, you’ll be on track to beating this. Good luck!

Editing is pretty good on a formal level; on a rules-language level, I noticed a couple of snafus, but nothing to wreck the pdf. Formatting in particular deviates quite a bit from 5e’s default conventions. Layout is gorgeous and uses a quasi-Egyptian full-color background, with colored scarabs at the top and bottom. Artworks are pretty copious, and blend public domain and high-quality full-color pieces of artwork. This is a beautiful book. Big plus: While the book has no bookmarks, it does have internal hyperlinking – which is actually better for books like this: You’re not SPOILED by accident if you exert some discipline. But know what SUCKS? You can’t highlight texts in this pdf, or copy it. This becomes an issue when using the goblins for added difficulty. While usually, the encounters simply provide their stats where needed, the goblin stats are in the beginning, and you can’t quickly jump to those – having a single bookmark for that stat, or a “go to goblin/jump back”-button would have been nice. Or, you know, just having the damn common courtesy of being able to just copy the text from the pdf, like pretty much 99.9% of pdfs out there.

Rodney Sloan’s “Death Queen & the Life Stone” is an unpretentious, challenging, choose your own adventure style book using 5e; it’s deadly and not something you’ll beat at first try, and that’s a good thing. For the most part, the story-game-overs for bad choices seemed fair to me, though the very high sudden death chances for encounters with multiple enemies irked me slightly. As noted before, some of these might have warranted an escape Dc or saving throw to avoid, but that may be me trying to hearken too close to 5e’s conventions. The narrative won’t necessarily blow you away, but the scenario per se is solid and fun.

So yeah, all in all, I consider this to be a pretty neat, if not perfect offering. Now, I’d usually round up from my final verdict. But not being able to highlight text? That’s really aggravating. My final verdict will hence be 3.5 stars, rounded down.

You can get this inexpensive, solid offering here on OBS!