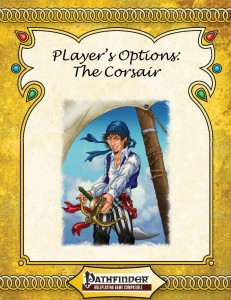 This pdf is 9 pages long, 1 page front cover/editorial, 1 page SRD and 1 page advertisement (though that page also has 3 lines of information, leaving us with 6 pages of content, so let’s take a look!

The corsair, unsurprisingly, is particularly adept at fighting on board a ship and also gains so-called letters of marque, which exempt him from the gallows when attacking specific vessels and allow later for multiple letters. However, tehy come with a price and cost quite some money. Honestly, I don’t think they should be a class feature, but instead an item/suggestion for the DM to award the class. Corasirs also get the favored terrain (water) and are adept at scrounging together pieces of equipment. At 2nd level, they gain access to one pirate flag, which works somewhat akin to a cavalier’s banner and may opt to choose further flags at subsequent levels – from a total of 10 different flags provided – false flags, skull-n-crossbones etc., with some requiring a minimum base level. Corsairs also pick up a lot of exotic weapon proficiencies throughout their travels and thus gain a couple of exotic weapon proficiencies throughout the levels. As a capstone ability, they may declare a target the aim of their Black Spot, ignoring a target’s DR, add cha-mod to atk and level to damage of the marked individual.

We also get a sample Corsair at level 4 (alongside two traits intended for the setting Prophyra) as well as 8 new piratey weapons, all with neat b/w-artworks and full stats.

Editing and formatting are top-notch, I didn’t notice any significant glitches. Layout adheres to 4WFG’s b/w-2-column standard and the artworks provided for the weapons and character are nice. The pdf comes with a single useless remnant of a bookmark, which, at this length I won’t hold against the pdf.

What I do hold against it is the lackluster, bland execution of this class. The Corsair has NOTHING going for him. Not agile enough to be a trick fighter, highly specific in focus, the class has abilities that are campaign-fluff and don’t net the class any significant benefit. Worse, it is linear as all hell, lacks customization options and is thoroughly underpowered – from bland bonuses to a ridiculously limited capstone, the corsair is the weakest class I’ve seen in ages for PFRPG. We don’t get any class-specific feats, archetypes or anything really beyond the nice weapons, which makes this extremely lackluster class feel like yet another bad take on the pirate-trope – in line with Freeport’s Corsair, 3.X’s Dread Pirate etc. Comparable aquatic rangers can and will mop the floor at any given time with the corsair class. Beyond even that, we don’t get firearm-proficiencies, not even as optional rules, no support for naval combat (here the class could have really shined…) and anything really that would make this class work. There is nothing ambiguous about the rules per se, but I can’t imagine this lame, straight class being even halfway amusing to play when compared even to only the options provided in the PFRPG-core – worse if you actually use all the rules that have supplemented the core-rules, whether by Paizo or other 3pps. For me, this class, which had concept-wise so much potential, fails terribly at what it sets out to do and not even the sample character or the weapons remedy the simply unimaginative design. Seeing how I can’t see any of my players ever taking this class (or me creating a corsair myself – why? Aquatic rangers, even if you don’t use Alluria’s Cerulean Seas, are better…), I can’t rate this higher than 1.5 stars, though the new weapons and sample character are nice touches that work well and elevate this pdf to a final verdict of 2 stars.

You can take a look at the Corsair here and the subscription which includes the Player’s Options-pdfs here.