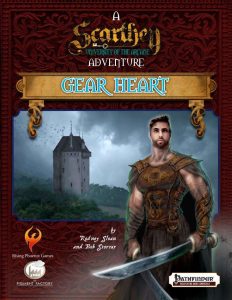 This review was requested by one of my patreon supporters after the rather interesting Anaximander’s Adventuring Studies had piqued their interest.

This is a Scarthey-module for the magical-school setting, and I strongly suggest using Anaximander’s Adventuring Studies as an introduction to the setting, should you choose to go that way. The module is nominally designated for PCs of levels 1st to 5th, and it references Bestiary 3 material.

The module comes with introductory read-aloud text, as well as a surprisingly nice almost isometric full-color map of the adventure location. The map does not come in a player-friendly version, though, and individual rooms are not consistently designated on the GM map with keys.

The most glaring issue I encountered on a formal level, though, would be that the pdf switches between text that looks like read-aloud text and rules-relevant components/GM-instructions without a formal way to differentiate between the two. For example, we have a paragraph of descriptive text, that then proceeds to continue describing things…and suddenly mentions that a DC 20 Perception check is required to notice that. Layout-wise, this could have been implemented in a cleaner fashion.

SPOILERS ahead! Move to the conclusion, if you’re a player!

It should be noted that, while the pdf does have a background story, which also ties in with a plane of infinite bleakness and nulled magic, but it does not really bear any relevance on the proceedings: Instead, the PCs arrive at the adventure location, engage in some very basic investigation of the location, and then delivers one interesting sequence that pits the party against a combination of creature and trap (a clockwork brain animating servants!), which must be beaten in a few turns – 8, to be precise. I am pretty sure that this should be “rounds”; otherwise, there is a good chance some groups might not be able to do much at all. The trap has no range listed for its single mode of attack, and the attack does not scale: At a +6 ranged touch attack that inflicts 4d4 electricity damage, it is very brutal for 1st level characters, and for all higher levels pretty pitiful.

And that’s pretty much it. Creature names are not highlighted, and while I liked the essentially one encounter this module consists of, it’s not enough to challenge a veteran group. You could conceivably play the entire module in less than 30 minutes. I’m not kidding you.

Editing and formatting on a formal level are okay, though the sequence of information and how it’s presented may cause some confusion. Layout adheres to the baroque full-color standard of Scarthey, and is pretty nifty from an aesthetic point of view, but a brutal drain if printed. The artworks are surprisingly neat for such an inexpensive offering, and same goes for the map. The lack of a player-friendly one-page version of the map is a downer, though. The pdf has no bookmarks, which is a comfort-detriment, but considering the brevity of this module…ähem, encounter, that won’t be an issue.

Gear Heart, by Rodney Sloan and Bob Storrar, builds a cool premise and atmosphere, and then proceeds to do nothing with it. It has this one solid idea, but sports no interesting global effects, no build-up, no denouement – it’s almost jarring. Granted, this costs less than 2 bucks, but I’d genuinely recommend getting the big Anaximander module instead; it is more than an encounter, has a more precise presentation, and will keep your group busy for several sessions. Gear Heart, though? I can’t really recommend it. It’s not terrible, but neither is it up to par, which is why my final verdict can’t exceed 2 stars.

You can get this encounter/mini-module here on OBS.

Want the vastly superior Anaximander’s Adventuring Studies? You can find that module here on OBS!