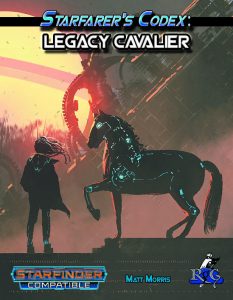 This installment of the Starfarer’s Codex-series clocks in at 24 pages, 1 page front cover, 1 page editorial, 1 page SRD, 2 pages of advertisement, leaving us with 19 pages of content, so let’s take a look!

All right, so, unlike the excellent legacy gunslinger, this one features once more a base class: The legacy cavalier receives 7 + Constitution modifier skill points, 7 HP, 4 + Int skills per level, proficiency with basic and advanced melee weapons, small arms, longarms and both light and heavy armor. The class sports full BAB-progression as well as good Fort- and Ref-saves.

Okay, first disappointment: Challenge is a 1/day ability, +1/day at 4th level and every 4 levels thereafter, where the individual bonuses also increase by 1. I really don’t get that, as it was already annoying in PFRPG, and SFRPG tends to use Resolve expenditure in conjunction with Stamina recovery as a refresh  mechanic for abilities you shouldn’t spam. You get +2 insight bonus to atk versus the target, and take a -1 penalty to AC with regards to other targets. Challenge has no duration, and has order-dependent effects, but at 13th level, you can use your reaction after defeating a challenged foe to designate a new opponent; at 17th level, being declared the target of your challenge imposes a -2 penalty to atk rolls and spells ave DCs for targets other than you..

Also at first level, you get Expert Rider, one of the new feats herein, which lets you treat an indifferent animal as domesticated and trained for combat for the purpose of riding it. Additionally, at the start of your round, you may make a Survival check to direct your mount instead of needing to take a move or swift action, and you may make a Survival check to stay in the saddle without needing to expend your reaction. You can also rear/train animals in days or weeks and lift them to a CR equal to your character level -1. You can only have one such specially trained mount, and can’t sell it for profit.

The second feat here would be Emergency Protocol, which lets you stay in the saddle when unconscious, and the mount will withdraw from combat – I like this one.

At first level, you also get a mount, using cavalier levels as master levels, as per the companion rules – the mount will usually be a horse or cycledroid, or a pony or cybersled. Base form must be quadruped or wheeled, and the companion must be one size category larger than you and possess the mount evolution at all times. Mounting in battle, fast mount or dismount, fighting, guiding with knees or staying in the saddle when the mount rears or takes damage all require no rolling. HECK YES. Thank you. This makes using them at the table painless.

But are mounts as potentially OP as they can be in PFRPG’s 1st edition? Well, first we choose a companion type: Biological companions get a natural attack as a bonus evolution at 1st level, and you can use your Resolve to stabilize it while within 60 ft. Replacing a fallen mount is a relatively quick process. Technological companions are technological constructs and proficient with small arms or basic melee weapons, and it gains specialization in the chosen weapon at 3rd level. Repair and replacement are relatively painless as well, but not something you’ll quickly do in combat. Companion base forms are aquatic, avian, biped, quadruped, or serpentine, with different ability score base array, and ACs, with EAC’s base value being at most 11, KAC’s at most 13. Each mount base form has a single good save and notes two ability scores that increase over the levels, as well as two skills which similarly are enhanced. Initial evolutions are included. Issue here: E.g. the avian form does not specify whether the base form’s flying ability is supposed to be extraordinary or supernatural, nor does it specify a maneuverability. This is relevant, as flight is usually an advanced evolution…which btw. makes no sense, in that it lets you choose between Ex and SU, or so it seems…but Ex is ALWAYS worse. Companions have a limited feat array, begin play with link, and 3rd level nets evasion, 6th devotion, 15th improved evasion, and a new set of advanced evolutions is unlocked at 11th level. They can attain up to 10 evolutions, 8 feats, and their good save caps at +9, the bad saves at +5, and the BAB adheres to a ¾-progression. Ac increases from +0 to +18, and HP increase from 10 to 230. Extra ammo, cooldown mighty jumps – there are some cool options here. In case you’re wondering – no, there is no evolution that lets them use ladders, but at least we do get an evolution that allows them to squeeze. As a whole, mounts are potent, but not as overbearingly so as they could be in PFRPG.

Back to the cavalier: 2nd level nets an insight bonus to Survival for handling and rearing animals and riding creatures, which improves further at 7th level and every 5 levels thereafter. 3rd level nets Weapon Specialization and tactician, which lets you lend a combat feat to an ally within 30 ft., for 3 rounds, +1 round for every 2 cavalier levels. It can be used 1/day, +1/day at 5th level and every 5 levels thereafter. Once more, this feels a bit archaic with its per day abilities, but on the plus side, Expert Rider is a combat feat, so you can briefly make allies not suck as much at riding. 9th level lets you grant 2 feats, or one to all allies within 30 ft. 19th level lets you use this ability as a move action and grant 3 combat feats to one target, or 2 to all allies within a 30 ft.-range.

4th, 8th, 10th, 14th, 16th and 18th level net combat feats, and 4th level lets you execute cavalier charges as a full action while in the saddle, which is interesting in that SFRPG’s harrying fir rules make this one more versatile for skirmishing. 11th level provides the option to make an additional attack at -4 to both attack rolls when using the cavalier’s charge ability, and the capstone doubles the challenge damage bonus when hitting challenged targets at the end of an unmounted charge or cavalier’s charge; on a critical hit, the target must save or be stunned.

5th level nets banner, a holographic image that nets a scaling morale bonus on saves versus fear to allies, and this improves at 15th level to also apply versus charms and compulsions. The banner may then be supercharged as a standard action, allowing allies to reroll saves vs. mind-affecting effects. This one actually can be used again after short rests with Resolve expenditure.

As far as altered or replaced class features are concerned, the cavalier primarily misses order abilities or misses out on some bonus combat feats. Greater tactician might be delayed by one level if 9th level is a replacement class feature, replacing the 10th level combat feat.

8 orders are provided, and as before, they are chosen at first level. Orders usually add a skill as a class skill, have information on their edicts to adhere to, and modify the challenge class feature. Additionally, the orders provide 3 order abilities – one is gained at 2nd, one at 6th and one at 12th level. Let’s, in all brevity, go through these: The order of the void is particularly potent versus objects of the challenge target, and the first two order abilities allow for the breaking of barriers and objects more easily; the last one lets you sow distrust among targets, which causes them to lose the ability to e.g. grant flanking bonuses, etc. This ability once more does look like one that could feel Starfinder-esquer, but that’s me nitpicking. Not so nitpicky: The order of the ward (challenge and abilities focusing on enhancing the AC of allies) has one ability that improves at 15th level – and it’s the only such scaling operation. Pretty sure that should be 12th level. Cool: There is an order for stealth operation specialists, a hologram-themed feinter, a pretty straightforward ranged specialist, and one order that lets you coax more out of tech and batteries.

The pdf also provides a summary of mounted combat rules and stats for light and heavy horses.

Editing and formatting are very good on a formatting and rules-language level. Layout adheres to the series’ two-column full-color standard and the pdf features some rather neat full-color artworks. The pdf comes fully bookmarked with nested bookmarks for your convenience.

Okay, I freely admit to being slightly biased in favor of this pdf as a concept. Saber Rider was one of my most beloved childhood shows, and I can still listen to that show’s theme-track on an endless loop for hours without getting bored. I love the science-fantasy robot-horse cavalier idea. I always liked the notion of the cavalier, particularly the space cavalier. However, I also consider the original PFRPG cavalier to be an abject failure and one of the most boring, unrewarding classes for the system.

I adore the notion of the space cavalier. And the legacy cavalier does a better job at the trope and as a class than I feared it would. The fact that these guys miss out on onslaughts unless mounted, etc. is a pretty interesting balancing tweak for a generally potent class.

Matthew Morris’ legacy cavalier’s primary shortcoming is, ironically, in that it tries pretty hard to be an “as faithful as possible” legacy conversion of one of the most boring PFRPG classes ever.

The cavalier has all big choices at first level, and this hold true for this version as well, alas. Mount customization does help a bit. But only a bit. Add to that that its abilities try, more so than most SFRPG-options, to impose fixed, non-Resolve-based limitations, and we have a class that very much feels like…well, a legacy conversion.

Personally, I wouldn’t want to play this class; It’d bore me, particularly withal those 1/day abilities. The class does very few things with all the cool options that Starfinder has to offer, and ultimately, that’s what most irked me about it – it didn’t feel like a Starfinder class to me. Your mileage may vary, though – and what may be a fatal failure of the design for me, might be a great, newbie-friendly feature for you. If you expected something more akin to how legacy gunslingers work, then this might disappoint you.

As such, my final verdict will be 3.5 stars, and while, personally, I’d round down, as a reviewer, I have to acknowledge that plenty of people might want this – a class they can just settle on and be done with; no huge option array to consider, just pick and play. Hence, my official rating will round up.

The excellent legacy gunslinger I mentioned can be found here!

You can get this as part of the massive Starfarer-bundle here on OBS!

If you don’t know Saber Rider’s incredibly cheesy and amazing theme, check it out here!