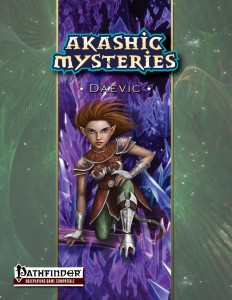 The third installment of the Akashic Mysteries-series clocks in at 33 pages, 1 page front cover, 1 page editorial, 1 page SRD, 1 page advertisement, leaving us with 29 pages of content, so let’s take a look!

So, as you may have gleaned from my various reviews and designs, I really enjoy classes with a lot of moving parts that manage to get the math right – the first two akashic classes are prime examples of how extremely compelling characters like this can be – instead of twiddling one’s thumbs while waiting for the next turn, there are A LOT of things to consider – move essence or not, burn essence or not? The vizier pretty much plays a bit like a caster, being defined mostly by interaction with veils, while the guru turned out to be a pretty much more versatile and complex support character who can stand at the front lines, while also handling unique things. Mechanically, the guru was defined more by class features and the interaction of veils with them – though both have in common that variations in class themes via e.g. philosophies result in radically different playing experiences, while also putting player agenda on an extremely high pedestal. Suffice to say, I have extremely high hopes for the final book to be one for the records – so can the Daevic maintain this level of quality?

And more importantly, what’s his niche? Well, you’ve read the above rant – and perhaps, you sat there and thought: “That’s not at all what I’m looking for in a class!” Many small choices and tactical options, handling a lot of moving parts – that’s not everyone’s cup of tea, and this is exactly where the daevic comes in as a simpler, but in no means bland akashic class.

Let’s take a look at the frame: Daevics gain d10, 4+Int skills per level, proficiency with simple and martial weapons, all armors and shields (but not tower shields), full BAB-progression and good fort- and ref-saves. The veilweaving here is different from the previous two classes, but there are similarities – the DCs, if appropriate, is DC 10 + 2 per essence invested +cha-mod (making Char the governing attribute here), but there is a crucial difference to default veilweaving – the veils granted at 1sr, 4th, 9th and 15th level must be associated with the chosen passion, whereas the other veils gained operate like standard veils, meaning the progression is from 0+1 to 4+4 over the 20 levels of the class. Essence is gained at 2nd level and scales up to 10, chakra binds also begin at this level and scale up to 6, with progression being Feet, Hands, Wrists, Shoulders, Belt, Neck, Chest. On the minor engine-tweaks, 5th level nets +1 to saves versus enchantments, which scales up by +1 every 3 levels thereafter.

Now I noted the existence of passions – these are chosen at first level. When a daevic invests essence into a veil of a passion (called passion veils), it counts as being invested in all passion veils, meaning that the very scarce essence pool makes investing points here more efficient. However, at the same time, power escalation is prevented by an explicit rule that forbids synergy with veil-specific feats or effects. or catalysts, though you CAN also bind them as normal veils and circumvent these restrictions, adding a further dimension to these veils. Three sample passions are provided, and all modify the list of available passion veils to choose from, the class skill list and all ultimately change how the class plays, so what are they?

The first passion would be desire – which allows 3rd level daevics to use Cha for Appraise and may replace both Dex and Int as prereqs with Cha for the purpose of feat-prerequisites, offsetting some, but not all strain that would otherwise be burdened MAD-wise on a full BAB character. The in-game rationale for this, while not perfect, at least is sufficient for me – why do I mention this? Because I get pimples from the default “I’m so good-looking I hit foes”-rationale employed by some abilities out there. So kudos! Bonus-feat-wise, they focus on thrown weapons. An interesting option – at 6th level, a passion mutates into one of 2 choices – here, this would be love or avarice. Love provides an NPC-companion that is pretty powerful – but it does not stack with Leadership. Daevics that follow the passion of avarice add the returning and called abilities if within the daevic’s possession for more than 24 hours – however, the abilities are lost again upon willingly giving them to another creature. On the nitpicky side, there are some minor formal glitches here. At 12th and 18th level, this ability improves regarding action economy and effects like a miniature bloodline.

The second passion to choose would be dominion, which focuses on two-hand fighting with a shield – yeah, interesting! The 6th level change allows for the choice of benevolence or tyranny, with the former providing a scaling teamwork-granting ability, while the latter provides demoralize support as swift actions with scaling bonuses. The wrath passion has some nasty tricks: Whenever the daevic bull rushes or overruns a foe, he may execute an AoO against the foe, though this powerful effect is somewhat countered by the lack of gained bonus feat. And yes, this also can provide vast amounts of damage. Wrath may transform into justice or vengeance at 6th level, with justice providing access to the vital strike feat-chain…and the option to execute AoOs with Vital Strikes added. And yes, this may not sound like too much, but oh boy can a proper set-up blow damage per round into ridiculous high levels. Still, I can live with this, though GMs should beware – large PC-races + reach weapon + this will be a MASSACRE. As for vengeance:1/round full-attack against a target when succeeding a bull rush or overrun, but only with natural weapons. This ultimately boils down to a true meat-grinder -only shreds and gooey bits remain in the path of such a daevic. At 9th and 15th level, the essence capacity of the passion increases by a further +1.

The Blood Bind ability’s write-up fails to mention that it’s gained at 12th level – and it’s interesting: It provides essentially an additional slot, into which the daevic can bind neck, head, headband and body slot veils, but whenever he does that with a non-blood veil, he takes twice the essence invested damage each round, getting even reassignment abuses out of the way. Nice! The capstone is a boring outsider-apotheosis (native, I assume?) and can reassign veils via 1-hour meditation. Odd – the daevic gains the body-slot at 20th level – so does that mean a daevic can only bind body slot veils to the blood slot before 20th level or is body-slot veil binding only unlocked for the blood slot at 20th level? This needs some clarification.

The feats-chapter does sport some overlap with the already published books, though there is some new content to be found herein – unlocking chakras for classes as well as a significant array of feats to allow for gestalting/multiclass-builds, including support for psionics, ultimately render the whole framework superior in that regard to the predecessor-system Incarnum’s take on the concept. Enhanced Capacity is a feat you WILL want as a daevic, though unlike Life Bond’s interaction with the guru, I saw no balance-issues cropping up from combining the class with previously established content. (Though said feats and its associates still need a retooling.) One feat deserves special mention: Essence Focus. You can invest an essence into the feat to regain your psionic focus, with a 3-round cooldown preventing the constant spamming of the awesome combos available via this feat’s modification of action economy. Even more interesting, the feat allows you to make psionic focus work to activate two abilities that require the expenditure of the focus while essence is invested in the feat. This is pretty much a genius way of providing truly distinct combos – powerful, yes, but oh so awesome. That Extra Essence pretty much is a no-brainer for Daevics with their limited essence pool should not come as a surprise. Over all, the selection here feels pretty refined.

The veils, obviously, do sport some overlap with the other akashic classes, though especially bull rush/overrun specialists will definitely enjoy the option to avoid the feat-tax and adding damage as insult to the injury. Interesting would also be that you can find veils herein that have no effect unless imbued with essence and/or bound to chakras, providing e.g. significant synergy with vital strikes, which becomes very relevant regarding the new builds available for AoO-Vital Strikes – size-increase is the name of the game here. While there are minor rules-language presentation hiccups herein (“Fortitude 1/2” instead of Fortitude halves, for example), there are also some rather versatile veils herein that not only provide different effects depending on the essence invested/chakras bound, but rather providing different options within those choices as well – and yes, we do get exclusives for the daevic’s unique blood slot – like duplicating unnatural lust or gaining blood that causes both fire and acid damage to the creature attacking the daevic…and binding it to work as AoE via chakra-bind. Imagine my surprise, by the way, when I saw a classic, German slot introduced – “Wrathful Claws” are bound exclusively to the “Hans”-slot – definitely the funniest typo I’ve seen in a while. 😉

Editing and formatting do show that this is still WiP -while in no means bad and pretty functional, this pdf does sport numerous italicization glitches, typos and the like. The rules-language is more precise than in previous Akashic Mystery-pdfs, though. Layout adheres to Dreamscarred Press’ beautiful 2-cpolumn full-color standard and the pdf does sport a mix of nice original art and some I have seen before, all in full color. The pdf comes with a more printer-friendly version as well. The pdf has no bookmarks, which constitutes a comfort-detriment.

As before, all the gushing about the base system and its mechanics that I have indulged in previous reviews of the series hold true still here. Michael Sayre does provide an actual compelling, tactical full-BAB-class with a plethora of options and things to do – and, coincidentally, the akashic class that does not require constant tinkering: Indeed, the daevic does require the least constant pondering, unlocking the system for players less intrigued about constant complex modifications – while it *does* support this playstyle as well, it can be played more like a prepare and forget type of class, which is ultimately the design-intent here. The daevic is a glorious class, though GMs heavily using DR should take not that the options of the class pretty much waltz all over the DR, making the daevic a powerful shredder if build properly. Ultimately, I adore this class and enjoy its unique slot and the options provided within; more often than not, one can see the growth of designer Michael Sayre that denotes him as one author to definitely watch!

Now I do have to somewhat bash on the pdf due to the editing glitches that can be found herein and minor wording issues that can use streamlining, but once these are cleaned up (and if Michael doesn’t drop the ball in the supplemental content-pdf), Akashic Mysteries may become one of my absolute favorite new system – it has all the potential and makings of an EZG Essential. My final verdict for the daevic as presented, for now, will clock in at 4.5 stars, rounded down to 4 for the purpose of this platform…and for now. I really, really hope Dreamscarred Press makes the final book live up to the vast potential!

You can get the third class in the series here on OBS!