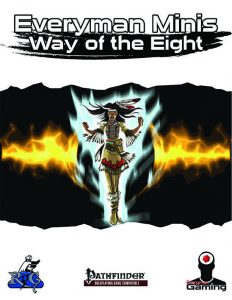 On the first page, next to the introduction, we are greeted by supplemental material – this time around, that would be 3 new feats: Eight Steps Acolyte, Eight Steps Initiate and Eight Steps Master.

But before we can take a look at them…what is this “Way of the Eight”? Well, it basically is a philosophical concept that revolves around transcending the physical limitations – it is thus geared towards martially-inclined characters. Only characters with ki, martial flexibility or stamina may attempt climbing the 8 steps – note that Combat Stamina does not suffice. Additionally, the character must have the Endurance feat. Beginning to ascend the Way of the Eight costs a swift action and 1 point ki, 1 use of martial flexibility, or 2 stamina. Stamina thus spent may not be recovered until the character has finished 8 hours of rest. On subsequent rounds, the character may expend additional uses/points and actions to ascend further. Alternatively, a character may ascend multiple steps at once as a full-round action, with costs being cumulative. A limitation regarding steps would be the base attack bonus (cool!) – in order to ascend to a step, the character’s BAB must be twice the step’s number. Step 3 would hence require a BAB of +6 or higher. Each round while the practitioner has ascended at least one step, she takes nonlethal damage equal to twice the number of steps ascended – 8 while on 4th step, for example. When using a full-round action to hasten along the journey, the character takes nonlethal damage equal to 10 times the step ascended to. Nonlethal damage thus incurred can’t be reduced or redirected, nor can they be healed unless the character has been reduced “below 1st” (here, “step” is missing) and rested for 10 minutes. Creatures immune to nonlethal damage can’t ascend on the way.

Okay, that out of the Way: The Initiate feat lets you ascend as a free action, but not more than once per round. You can use it in conjunction with the usual activation actions (allowing you to take 2 steps sans the full-round action extra nonlethal damage). The Acolyte feat decreases the rank of the step by one for purpose of nonlethal damage incurred. EDIT: The pdf now clarifies that nonlethal damage does not go away until it has been decreased below step 1.

Okay, so what do these steps net you? First, a HD-governed atk and damage boost; at 2nd level damage die increase for weapon attacks, as though affected by lead blades/gravity bow. Step 3 nets more movement, short-burst Fly (must end on surface) and slowed falls. Step 4 nets an AC and Reflex-save boost governed by steps, as well as a DR (which is halved versus adamantine – interesting!). Step 5 nets supernatural versions of scorching ray (free) and cone of cold, fireball, lightning bolt (cost ki/martial flexibility/stamina) that deal force damage. These are SUs, with CL based on BAB and Constitution as DC-governing attribute. Step 6 nets haste. Step 7 makes movement instantaneous – the practitioner disappears and reappears at the place in question. No AoOs from foes sans Combat reflexes. For double the usual activation cost (2/2/4), the character can grant himself the benefits of displacement. (Italicization is missing.) Step 8 provides basically advantage (rolling twice, take better result) for all ability and skill checks, attacks and saves. The practitioner doesn’t lose steps upon being reduced to 0 hp, gains ferocity and adds BAB to Constitution score to determine negative hit point thresholds before dying.

Editing and formatting are very good, I noticed no glaring hiccups. Layout adheres to Everyman gaming’s nice two-column standard and the full-color art is ncie. The pdf has no bookmarks, but needs none at this length.

Luis Loza’s “Way of the Eight” is an interesting twist on the design-paradigm of chakras presented in Occult Adventures – the flexibility and relatively painless options to ascend make sense. In fact, I could see this concept carry a whole series of pdfs or a bigger file, all with different ways. This is an interesting, fun offering. Now, personally, I would have enjoyed slightly more unique benefits from the steps, but of well – can’t have everything, right? As a whole, I enjoyed this. The rules have been clarified, making this now a full 5 star-file.

You can get this cool, surprisingly complex and dense mini here on OBS!