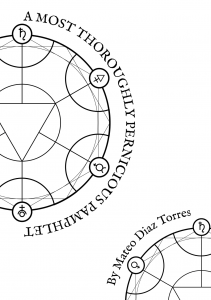 Okay, so, not counting front and back cover, this little pamphlet clocks in at 17 pages, one page of which is devoted to an explanation regarding inspiration, as well as editorial information, art credits, etc. Half a page is the advertisement for the expanded book soon to be released, which leaves us with 15.5 pages of content – and there is a surprising amount of that within.

This review was requested as a prioritized review at the request of my patreons. My review is based on the print version.

It should be noted that the booklet’s front and back cover are the same paper as the interior, not the usually somewhat sterner stuff…and there is another thing to be aware of: This booklet is basically a flavorful teaser for Pernicious Albion (the deviation from “perfidious” is intentional) – since this means that I don’t really have a succinct rules-set to fall back on, I won’t be able to judge this booklet for its rules-integrity, just for its ideas. It should be noted that a moderately competent referee should be able to apply the rules presented to his/her favorite old-school game without too much of a hassle. It should also be noted that the world depicted herein would be one of dark and decadent splendor – this wasn’t written for younger players.

So, upon opening this pamphlet, we begin with information on clerics in Albion: As a hotbed of decadence and harbor for blasphemous thoughts, these exist in abundance, particularly considering Queen Agorath, the incomprehensible, divine behemoth that rests “in the hadopelagic void beneath creation.” I had to quote the text here, because these few words managed to conjure forth some potent visuals, at least for me. The royal clerics of this insane deity of black magic and bodily transformation can eat a creature’s heart: If they do, they must succeed a saving throw vs. Magic; if they succeed, they can turn into that creature 1/day for a number of turns equal to the cleric’s level. I can’t judge on whether an activation action needs to be specified, but to give you an idea of the sense of grotesque decadence herein: If the cleric consumes the heart in a sufficiently opulent manner, he can accrue bonuses to the save – silver spoons, servants, etc. This provides a benefit-related justification for the dark splendor that shines through, time and again, when reading this.

This general notion of a setting steeped with the occult and magic in general also extends to magic-users, called magicians herein: These and all characters with an Intelligence of 15 or higher can pick one of 5 cantrips that they can perform at will: Amaimon’s conjuration generates an ephemeral, perfectly tasty morsel of their choice…that does not sustain the eater. Belial’s breath allows the character to control the dreams of a target by breathing in their ear, but doesn’t prevent a full night’s rest. The invocation of Buer allows you to light your finger like a match. The seal of Asmoday is basically a slightly disruptive prestidigitation with a “short range” – lacking a rule book to default to, I have to resort to spell-ranges as analogues here. Finally, the sign of Ose allows the magic-user to point the goat horns (well known to all metal heads) to implant a thought that could be said with a single breath. Again, range is something that I hope the final book will clarify there. On a plus-side, as the last cantrip exemplified, the inclusions of physical actions associated with the spells makes the magic feel more…magical. It’s just more atmospheric than reading that a spell has somatic or verbal components.

Now, a significant part of the pdf is devoted to the Warlock class – chassis-wise, the class is identical to the cleric. However, warlocks can’t cast spells on their own and must form a contract with an entity…which requires finding and convincing it, that a pact would be in the entity’s interest. Traditionally, this is achieved with a gift and/or quest. Once such mutual understanding has been achieved, the warlock may call the entity via a ritual that lasts 1 turn and then convince the entity to perform a task. Warlocks begin play with one spirit known and a handy bargaining table for the demands, based on a modified reaction roll, is provided. Now, this would be as well a place as any to mention the surprising art-density of this booklet: Each of the 3 sample spirits comes with a gorgeous and delightfully weird artwork…and there have been artworks before as well. So yes, not something I expected to see.

Regarding spirits: Three are provided, and they all are amazing and had me drooling for more: Old Queen Mab needs no introduction; but cooler than her would be the utterly WEIRD fallen angel Watcher Penemue, who gave mortals access to the written word before the appointed time (also my favorite art-work herein, just fyi: A naked, 8-armed, floating figure with a cowl as the head and floating grimoires with faces on them – inspired). I also am partial to the decadent incubus Rosier and his rather…physical tasks. Tasks? Yep. Each of the spirits has a handy 4-step task-generator for warlocks, each custom made. What benefits do they grant? Well, that depends on the warlock’s level: Level 3 and every odd level thereafter until 9th provide a new array of boons to request – and even a title for each level. Told you that there was a lot of lore jammed into this, right?

The second class option would be…the vampire. Yep. They have the same chassis as thieves and are pretty much aristocracy per default, beginning with the title of Baron and improving that at 2nd level and every even level thereafter, including several vampiric abilities – level 6 vampires (Marquess/Marchioness) can e.g. create objects from their blood! The rules-language, as far as I can tell here, is pretty precise, though, once again, I’d need to see the target system/global rules-conventions to properly judge that aspect.

Now, this may sound odd, but I really loved the discussion of the coinage of the realm – which includes the black Obol – they cannot be exchanged for other specie…and they represent impossible transactions. Kingdoms. Souls. Dreams. Coins of utter blackness, their mere existence sent my mind ablaze with the possibilities inherent in this setting. From there, we move on to the final part of the booklet – namely items and esoteric – I’d say “mundane”, but that wouldn’t encompass properly what I’ve seen. We get Carbide lamps. Notoriously valuable and crucial, but also potentially unreliable grimoires with surprisingly precise rules (they work, regardless of system), similarly concise rules for Tarot cards…and lists of armors and weapons. Oh, and guess what: Each such weapon/armor comes with different iterations: Light armor for the fairy may be a girdle; for nobles, that may be goetic scrawls; the Britonnic use woads, while New Londoners would employ greatcoats…it’s a small thing, but it adds depth and culture in a one-word table entry.

Oh, have I mentioned that there literally are sensible rules for using mummy dust to break curses, for the use and purchase of sacrificial goats and for tintype cameras? Oh, and there would be the Manus Magna. What’s that? A prestige-vehicle for the discerning noble. A severed giant#s hand, animated and studded with a throne. Come on, that is AMAZING.

Services like post, telegraph and train are noted…and on the final page, we learn about the languages of the setting. Cleric spells and tomes are written in Enochian; Elegaic is the language of grimoires and tragically damned – vampires, demons, etc.; Fol, the language of the fairies, is useless in its written form, changing its meaning every time when read. Even other undead have their own language – Lament. Coincidentally the language of the “boringly damned” – that made me snicker. Oh, and did you know that Mew, language of the cats, is OBVIOUSLY the prestige language of the animal kingdom? Well, now you do.

Editing and formatting on a formal level, are excellent. On a rules-language level, I’m missing the bigger picture regarding interactions etc., but what I could judge so far seems to be rather precise and provides some cool scavenging potential. Layout adheres to an easy-to-read two-column b/w-standard. This review is based on the physical booklet. The artworks by Alex Chalk, Logan Knight, Matthew Adams and Wil McKinee, in spite of sporting different styles, gel together really well, resulting in a nice rendition of the tone of this pdf.

Mateo Diaz Torres’ pamphlet honestly surprised me in the most positive of ways. This is an inspiring little booklet and one of the most concise, densely-packed such books I’ve seen in a while. No line is wasted and flavor drips out of even mundane rules. More than that, this is a sadistic, dare I say “most pernicious” booklet. As many of you know, I have a huge soft spot for quasi-Edwardian/Victorian dark fantasy and horror and this book hints at a setting that has me salivating for more. The splendorous decadence, marriage of crunch and fluff, the high-concept ideas and promising spirits all intrigue me to no end. That being said, I do hope that the final book manages to retain what seems to be a tight grip on the rules of whatever OSR-system (or its own global rules) it elects to go for.

While the agnostic nature of the booklet thus necessitates some work on behalf of the referee, I can warmly recommend taking a look at this booklet while it still is available – even if you’re not playing in an OSR-system. The ideas herein are worth scavenging, tweaking…you get the idea. Highly recommended. My final verdict will be 5 stars.

Weirdly, the Lost Pages store, the only place where you can get this right now, is currently offline, but you can still contact the publisher here – with some luck, you may be able to still get this!