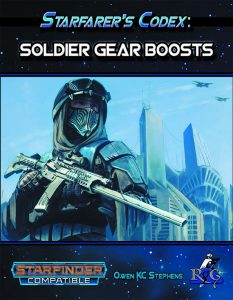 This installment of the Starfarer’s Codex-series clocks in at 8 pages, 1 page front cover, 1 page editorial, 2 pages of advertisement, 1 page SRD, leaving us with 3 pages devoted to new gear boosts, so what do we get?

Well, more than 30 new gear boosts, and these tend to offer some interesting options. We have, for example, Corpsman, which allows you to either heal the lower of half your ranks in medicine (not properly capitalized) or the item used’s item level in HP when patching up another creature. And before you ask, this does have a caveat that prevents spamming it. Devil dog helps you deal with fear-based condition when using a holographic sashimono. EPIC: DUCT TAPE! Tape two ranged weapons with Bulk 2 or less together, allowing you to quickly switch between them. And yep others can use it, but lacking your mastery of duct tape, they suffer some serious drawbacks. What about using fire extinguishers to end burn as a move action? And yes, does take larger creatures into account. Enhanced DCs for entangling weapons slightly better Dexterity bonus when lightly armored is also cool, as is the one that lets you use a camouflage membrane in the attuned biome sans cover or concealment – provided you’re far enough away from the creatures you try to hide from.

On the downside, there are two once per combat abilities – combat is an arbitrarily-defined segment of time; while using a shield generator once per combat as a move action, or granting allies a bonus when using an aurora or bright weapon for the first time in combat are both balance-wise totally okay, this still irked me on a rules-aesthetic level. As far as I know, only one of the captain actions in SFRPG’s starship combat has this per combat angle, and it irked me there as well. Tying this to 10-minute rests would have been a bit more elegant, imho.

That being said: A boost enhancer and awesome grappler moves (bionic commando, anyone?) can also be found; better restraining of targets, over- and undersized weapon use is covered (mainly for utility – oversized weapons don’t increase their damage RAW in SFRPG, so it’s about using your enemy’s weaponry), and we get an increase of the power of blocks. Increased penetration, no action extending, stabilizing or collapsing of bipods on solid surfaces…some cool stuff here. Extending blasts to twice the weapon’s range increment is potentially very strong and one I’d advise caution with. Shoot and scoot is also pretty potent, allowing you to shoot with a sniper rifle at the extended range and move as a full action afterwards. These latter two ones are probably the only ones herein where I’d be careful. They are not problematic per se, mind you – they just let you do really nasty things with the right build.

Aiming through sights as a swift action is also covered.

Quicker use of motion detectors, treating all small arms as quick reload weapons, disarming weapons and tossing them aside – some neat ones here. Controlled advances while in defense and heavily armored…and what about the option to make opportunity attacks with unwieldy weapons, even though you already attacked? I also really liked the means to fire automatic weapons with less ammo expenditure, but at the cost of only hitting a maximum of 5 targets.

Cool: The 7th-level boost for consuming twice the ammunition when firing a line weapon to enhance its breadth to 10 ft. At this level, we btw. also have a gear boost for a bonus to attack with starship weapons.

Editing and formatting are good on a formal and rules-language level – I noticed a few typos and some minor niggles, but nothing serious. Layout adheres to the series’ two-column full-color standard with a nice artwork. The pdf has a bookmark for the editorial, in spite of its brevity.

Owen K.C. Stephens really knows what he’s doing, and it shows: The gear boosts presented here are potent, yes, but the impressive thing is that they make sense in some way – they are tied to the gear in question. There is never this disjoint, and all feel like they really represent expertise with the respective items. Now, some of the boosts are pretty situational, and I do have a few niggles here and there. However, the supplement is inexpensive, and offers some seriously cool options that brought a smile to my face – and these offset my niggles regarding this pdf. As such, my final verdict will round up from 4.5 stars – soldier fans should definitely take a look.

You can get this cool supplement for just $1.95 here on OBS!