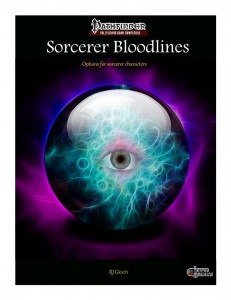 So, this book introduces us to an array of more bloodlines for sorcerors…so how do they hold up?

The ancient bloodline is all about the spirits of the past, but more in a “tapping into the ancestor’s knowledge”-way. More interesting would be the crystal bloodline – fire rays and shards, refract illusions – nice one!

The lycanthropy bloodline nets you beast shape and claws/bites – the former do not explicitly specify whether they are considered primary or secondary natural attacks, though the bite’s caveat it can be used as secondary makes me think that they are primary weapons. This slightly opaque wording here, explicitly stating how many attacks you can execute with them, which, while precise, deviates somewhat from how one would expect such an ability to be delivered – it’s more in line with a spell in its wording than a granted natural attack. While this is not perfect in my book, I get the rationale behind it and thus, this will not influence my final verdict. On the plus side, the scaling of them is awesome – increasing damage type and even netting bleed damage at higher levels.

The sand bloodline nets burrow speed and sand blasts…but I’ve seen this concept done better before. The same cannot be said for the swarm bloodline-squeezing into spaces, distracting foes with pseudo-swarm-like particles – damn cool! (And yes, assuming swarm form and apotheosis are high-level options for this one!)

The Time bloodline may have a bit of a killer ability at first level – at a touch phase an enemy from the time-stream for 1 round. While not that impressive on paper, in combat, this can be very powerful. Thankfully, the 1/24 hours/target-caveat prevents abuse, but I would have loved to have information on what happens if the space of the creature phasing back is occupied. The Toymaker bloodline can entangle foes with strings, summon toys etc. – nice, though not as cool as Dreadfox Games’ Puppetmaster. The Xill bloodline receives claws (same ramble as with the claws granted by the lycanthropic bloodline), paralytic bites etc.

We also receive 2 archetypes – the cunning sorceror who exchanges bloodline powers and arcana for more skills and feats and the Battle Sorceror. The latter receives d8 HD, some weapon and armor proficiency sans spell failure, but pays for that with less spells. Additionally, they may select combat feats instead of bloodline feats. Solid.

Editing and formatting are top-notch, I noticed no significant glitches. Layout adheres to a printer-friendly 2-column b/w-standard and the artworks are solid b/w stock. The pdf comes with minimum bookmarks, but a few are better than none.

RJ Grady’s Sorceror Bloodlines are more than solid – in spite of having seen MANY of these, this pdf has managed to provide a couple of cool options I haven’t seen before and utilizes solid crunch and wording to deliver its concepts. That being said, for my own tastes, the capstones result a bit too often in apotheosis-style transformations and immunities – while in line with the tradition, this also means that the capstones not always can be considered as awesome as one would like it to be – not all bloodlines reach the awesomeness-level of e.g. the swarm-bloodline.

HOWEVER, over all, this is a nice pdf for a more than fair price-point and the mini-archetypes, while not too uncommon, make for solid micro-toolkits to add to the sorceror. My final verdict hence will treat this pdf as a good pdf on the verge of, but not completely, in the territory of greatness. Thus, my final verdict is 4.5 stars, rounded down to 4 for the purpose of this platform.

You can get this inexpensive supplement here on OBS and here on d20pfsrd.com’s shop.