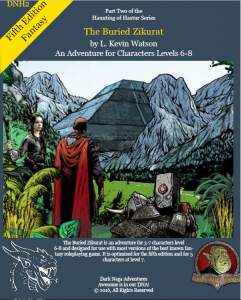 The second installment of the Haunting of Hastur-series clocks in at 28 pages of content if you take away the editorial, ToC, etc., but that does not really represent the module properly.

This review was moved up in my queue due to me receiving a print copy of the adventure.

You see, that page-count only covers the core adventure sported, and the book comes with two supplemental tomes: The first would be the Map and Illustration booklet, which provides full-page, high quality renditions of the artworks, as well as all the full-color maps of the module. These are provided in the pdf as well, and oddly, the maps in the Illustration and Map booklet are a bit pixilated.

Speaking of maps: My review of this supplement is based on the neat kickstarter print edition of this module, which comes with a detachable cover and full-color maps inside – these are high-quality indeed, and properly high-res, though no player-friendly, key-less versions are included. This is the ONE book I’d consider to be optional.

You see, there are two more supplemental books for this adventures, the Book of Lore and the Book of Puzzles. The former contains more than 20 (!!!) pages of handouts! No, I am NOT kidding you. More than 20 pages of frickin’ handouts, all laid out like documents, letters, etc. with different fonts etc. The Book of Puzzles covers 14 pages…and is AMAZING. You see, the module sports a series of puzzles…but not all tables enjoy having their wits challenged. So this remains optional. In this book, we can find three difficulties of puzzles, ranging from basic riddles to number puzzles, logic problems to cryptography quotes, these are damn cool and add some all too often neglected mental exercise to the gaming process. Two thumbs up!

Both are de facto 100% optional, as combat is always a means to bypass these locks, but frankly, I believe that the Book of Puzzles is absolutely mandatory. The Book of Lore is highly recommended as well. Why do I consider them to be so crucial? You see, this module is unique in that it can be cleared without a single combat encounter! As such, it can theoretically also be run as a 1-on-1-adventure, as it primarily tests PLAYER-skill, as opposed to character-skill. So, after module #1 was a pretty standard, solid dark fantasy yarn, we take a totally different approach here: The module is essentially one that can fit seamlessly with pretty much all fantasy games and, genre-wise, is what I’d consider to be one of the exceedingly rare examples of “strange archaeology.” More on that in the SPOILER-section below.

The module includes an optional appendix for inclusion in the world assumed by Dark Naga Adventures, a brief dressing list, a table of fluff-only mushroom effects and three magic items that are variants of classic ones. There is one new monster here, and its formatting slightly deviates from the standard conventions, noting e.g. “blunt” instead of “bludgeoning” among the resistances or “All Others” to shorten the ability score section. I do not like this needless deviation. This also would be a good place to note that a few cosmetic typos can be found in these books: “actoins”, “delimas” and the like – nothing serious, but something that an editing pass could have caught. The module also sports something I enjoy, namely a spell that allows, at high-levels, for excavation of complexes. The spell exists primarily to account for logic, but rules-formatting-wise, the duration should not be instantaneous; the duration and casting time are contradictory; the spell should have operated with concentration instead. In short: The rules-language components are somewhat rough around the edges. On the plus-side, the spell’s hiccups don’t really impede the module, as it primarily serves a lore purpose.

Okay, so another thing that is important should be noted right now: NO, this is not yet another Cthulhu-themed Zikurat-dungeon. It’s something radically, dauntingly, different. In order to explain what it is, though, I have to go into SPOILERS. Potential players should jump ahead to the conclusion.

Okay, so whether or not the PCs have completed module #1 (the ending here is smoother if they have), they are contacted to visit a nearby clay mine, where a Zikurat has been unearthed. Unbeknown to the PCs, they only see half of it – human side. Below the surface, the edifice stretches on its head, providing a symmetrical structures separated in two halves. One was held by the surface folk, and one by the Formene elves. Who are these elves? Well, picture an elven tribe that is Not evil, but still lives underground, acting as stewards of sorts to the realms below, a necessity, considering the power of the rare ores found there. It should be noted that Hastur’s rising back in the darker ages has made them go into isolation…and that the sound defeat of his forces in module #1 will sport the impetus for the elves breaking their self-imposed exile. The Zikurat was once a trade-hub, a magical nexus that made invasion by armed forces all but impossible, and thus, the PCs explore an edifice out of time.

The mysterious function of the location is slowly unearthed as the PCs defeat either puzzle locks or hack through the vault-guardians and piece together the lore in a rather fun combination of direct and indirect storytelling. From pylons to the unique structure of the zikurat, the module manages to do something only rarely seen: It manages to be exciting and atmospheric without constant threat of death. It is almost like a clever horror-point-and-click adventure, slowly building tension and excitement. This is also facilitated by the very presentation: Each room notes the respective means of ingress/egress, a brief description for the GM, one description that you can paraphrase to the players, and, where applicable, a summary of the lore, though the handouts in the Book of Lore do a much better job. Still: Kudos for not requiring them!

In short, the module works LIKE NO OTHER D&D-adventure I have read so far. It feels at once old-school in a good way, generating a sense of true exploration and investigation, but still does something fresh and distinct. I cannot overstate how much I love how courageous this is – and better yet, the adventure manages to pull this off without becoming boring, proving that you don’t have to hack apart something every 2 rooms. It breathes a sense of internal consistency and has what the first module lacked in abundance: It is utterly UNIQUE. That alone makes this worthwhile in my book.

Anyways, I could go through this room by room, but that wouldn’t help you and just bloat the adventure; we conclude the scenario when the PCs meet one of the fabled Formene, a mage who botched a teleportation, half trapped in stone and dying, who bestows upon them the tools to traverse the dangerous region that gave these elves their name to the fabled city of Talos…for the first time in literally an age, outsiders will be allowed to set foot in this mythic place…

Editing and formatting are good, but could have been slightly tighter for the experience, both on a rules-language and formal level; layout adheres to a nice two-column full-color standard in the pdf version, but frankly, I prefer the b/w of the print version. The artworks are b/w and adhere to different styles, with some being amazing. The pdfs come fully bookmarked for your convenience and the full-color cartography is really neat, though I wished we got a player-friendly version.

I…have a hard time rating L. Kevin Watson’s “The Buried Zikurat” (The Book of Lore’s handouts were written by Ismael Alvarez, Kalyna Conrad, Troy Daniels, Jennifer R. Povey and Matt Roth, fyi); on the one hand, the lack of player-friendly maps is a serious disappointment as far as I’m concerned. As noted, the editing could have been slightly tighter, particularly in the rules-department. HOWEVER. Ultimately, that is not really relevant. The adventure does not require any of these aspects. It is, in essence, a truly rules-lite take on the essence of roleplaying; this is not about tweaking numbers, it is about storytelling, about using your mind, about exploring wondrous places. This is an investigation and exploration of a wondrous locale that works, surprisingly, sans NPCs, sans searching for clues with roll upon roll; this is radical in the way in which it allows you to really ROLEplay. If you get frustrated, you can still easily start a fight, sure, but the emphasis here is radically, drastically, different.

And honestly, I adore this module for the courage this must have required. Think about how much chutzpah that must have taken to pull; write a module in this day and age that is not contingent on a big boss fight, a flashy over-the-top sequence, but one that can stand on its own by the virtue of being clever, by its atmosphere. I love this. It is one of the VERY few jamais-vu-experiences I have seen in the last years. If you enjoy using your mind and need a break from mindless crawling and hack’n’slashing, then get this RIGHT NOW….just get it with the lore and puzzle supplements.

While I like that the base module does not require them, it loses a lot of the unique flair that sets it apart; on its own, you should probably detract a star from the final verdict.

That being said, I consider this to be absolutely inspiring, and I will rate this as intended, with the companion tomes. And, in spite of its formal hiccups and minor rough edges, I consider this to be amazing and unique. My final verdict will hence clock in at 4.5 stars for the whole experience, rounded up…and because I LOVE the courage and design of this adventure, I will also slap my seal of approval on this. Highly recommended for groups that want more out of gaming than killing monsters!

You can get the complete edition (with the supplemental books and in all three versions) here on OBS!

You can get the base adventure (with book of lore and puzzles) here on OBS!

There are two more versions: One for PFRPG here, and one for OSR-gaming here!