A Necromancer’s Grimoire: The Wonders of Alchemy 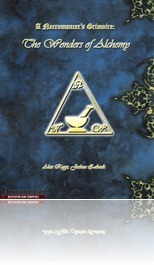 This pdf from Necromancers of the Northwest is 40 pages long, 1 page front cover, 1 page editorial, 1 page SRD, 1 page advertisement and 1 page back cover, leaving us with 35 pages of new content, so let’s check this out!

After a one-page short story about a mad scientist, we delve right into the subject matter, but what exactly is that? Well, alchemy in D&D and subsequently Pathfinder has always felt at least a bit like magic’s little brother – complimentary and sometimes useful, but nothing to write home about. Paizo has already done a lot to make alchemy feel more distinct and this book seeks to expand that even further. The first way in which the pdf tries to do this, is by adding two new item categories: Infusions and serums. Infusions are permanent ad change the bodies of those under their effects, but every person can only benefit from one infusion at a time. Infusions require ranks in alchemy, a certain minimum constitution of the person to which they are applied and also require skill-checks when they are applied. Infusions can also be flushed from the system and range in market price from 10.000 GP to 72.000 GP. 20 sample infusions are provided and each of their write-ups comes with individual drawbacks for the respective infusions – if you e.g. become immune to acid via acidium, you also lose 1 HP per HD you possess. On the more interesting side, the Buoyar-infusion enables you to fly, but penalizes your CMB and CMD due to quite literally becoming a lightweight. All in all, a well-crafted, innovative section that utilizes its drawbacks well to prevent any form of significant power-creep.

The second new class of items, serums, are usually directly injected into one’s bloodstream, via a syringe or the new serum injector, a wondrous item, which makes it possible to have multiple serums ready on the fly. The 20 serums range in price from 50 GP to 500 GP and, as with the infusions, rules to craft them etc. are provided as well. In contrast to infusions, though, serums grant their benefits temporarily. Even cooler though, you can actually swallow additional doses for enhanced benefits – generally, 6 steps of consecutively higher benefits for the intake of a specific serum are given, though these bonuses come at a price: If you “overdose” on serums, you get consecutively nastier penalties depending on the serum. From bonuses to attributes, saves and skill-checks to DRs, the serums are interesting to say the least. Even cooler, some unstable versions are part of the deal: While they offer significant bonuses, they also come with e.g. risks of petrification by wild growths of bone or similar unpleasant demises.

12 new poisons are also at the beck and call of ambitious alchemists. The poisons all come with a lack of full stops, capital letters in their effect description, but provide an interesting, high-level poison: Anti-panacea gets rid of foe’s immunities. Ouch!

And next is a chapter which provides wondrous items… that can be crafted via alchemy, at 1/3 of the price instead of 1/2. A one-page explanation is given for this option, though it contains a duplicated paragraph. A total of 50 such items that blur the line between alchemy and magic are included in the pdf and provide requirements to create them by magical and alchemical means. From a draught that causes amnesia to artificial pheromones, vapours that increase combat prowess, elixirs to temporarily grant you racial abilities and attribute boosts to e.g. ever-burning salts to temporarily ghost-suppressing bombs and intensifying lenses, the chapter provides a neat selection of new tools for your alchemy-inclined character.

Editing and formatting are not up to the highest standards: From missing commas and colons to double paragraphs and caps-errors, I’ve seen quite a bunch of them. The pdf adheres to NNW’S parchment-style 2-column standard and features stock-art, which is nothing to write home about, but also not required at this price-point. The pdf comes with an extra version that is printer-friendly and is extensively bookmarked. Once in a while, the Necromancers of the Northwest create a pdf that is not only useful, but at their constantly low price point, a total bargain. This is one of them. The expansions on the options of alchemy with the two new item-classes rock hard and if you like e.g. the “Witcher”-games and novels, a potential godsend. Especially if you’re playing in a rather low magic world, this pdf is a treasure-trove of coolness and the content herein can be considered to be top-notch. Unfortunately, the same cannot be said for the quality-control that went into editing and in said discipline, the pdf unfortunately loses some of the favour its great ideas have built up, at least with me.

It should also be noted that the “craft-via-alchemy”-rules could have been expanded further and made more unique, but that may be just me. More grievous is something potential buyers should be aware of: If you’re looking for new mutagens, extracts or bombs for your ALCHEMIST-class, this pdf will sorely disappoint you by providing none. Yes. The alchemist gets no specifically-designed new class-features. While the pdf provides content galore, I would have loved to see the at best mediocre poison-section be cut in favour of options for the class – after all, alchemist players are probably one of the target audiences for this pdf. That being said, serums and infusions still feel like they complement the class well, though some advice of e.g. the way in which mutagens, extracts, serums and infusions interact would have been appreciated. It is the lack of said information that costs the pdf further points. In the end, we’re looking at great new item-classes with some problems in their interaction, a lack of new features for the alchemist-class and some editing glitches – which is a pity. Were they included, in fact, were there a bit more fine-tuning, perhaps some content for the alchemist-base-class, this would be a stellar book, a 5 star + seal of approval recommendation. As written, though, it feels rough on the edges and somewhat rushed. Adding up the gripes, I find myself unable to rate this higher than 3.5 stars, rounded up to 4 for the purpose of this platform. At the low asking price, though, I wholeheartedly encourage you to check this out.

A Necromancer’s Grimoire: The Wonders of Alchemy is available from: