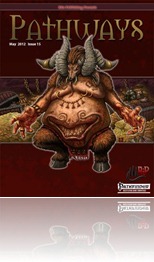 This installment of Rite Publishing‘s free e-zine Pathways is 49 pages long, 1 page front cover, 16 pages of advertisements, 1 page SRD, which leaves us with a whopping 32 pages of free content, so let’s check this out!

This installment kicks off with an editorial by David Paul about working on the latest RiP-projects and his own break-down of Adventure Quarterly #1 in particular.

After that, we are introduced to this issue’s template, this time by Will McCardell, also known as “Cheapy” on the Paizo boards and recently of e.g. “Secrets of the Tactical Archetypes I+II”-fame. The new template is the “Gluttonous Creature”-template, which adds + 1 to CR and is simply disturbing: The creature grows a maw that leads to a pocket dimension and enables creatures to be swallowed whole by it – worse, the maw provides additional attack-power, the ability to heal by feasting on foes and eating makes these beings actually FASTER. The sample creature also featured on the cover is Feygos, a CR 5 gluttonous Satyr that comes with complete lore-section and the inescapable grip-monster feat. The illustration by Lance Red is absolutely gorgeous and deserves praise – it could also be easily used for a variant demon of Orcus, for all the Slumbering Star-fans out there…

Jonathan McAnulty continues his support of the divine channeler and divinely-inspired characters in general in the next article, where he presents us with 3 new sacred tomes, 3 new spells and channeling effects for the metal and cave sub-domains. While I’d usually praise this section, the adamantine blade spell is broken in my opinion: A 2nd level spell that makes a weapon count as adamantine? Not gonna happen in my game. EVER.

Raging Swan’s mastermind Creighton Broadhurst provides us with another sample encounter: A rope-bridge across a huge chasm and two rather deadly harpies with character levels make sure that your PCs will remember this particular one! Very cool!

Scattered Sheaves I, by Run Amok Games’ Ron Lundeen is the first of a trio of urban mini-adventures that centre around reclaiming the missing pages of a manual of bodily health.

The trail of the thief leads the PCs sooner or later to an abandoned house titled “Flamelobber’s Lumber” (which comes with two small dundjinni-maps) and is guarded by some well-armed thugs. Beyond a secret door lies not only a complex a rather deadly trap to deter intruders, but also the secret lab of the gnomish alchemist who makes his home here and his alchemical golem. Once the PCs have vanquished these foes, they’ll have two more sojourns to go before they have the complete tome.

A nice little scenario, though if you truly want to check out Ron’s excellent writing, I’d encourage you to check out Run Amok Games’ first two adventures, both of which scored excellent ratings not only from yours truly, but also from other people.

Mike Welham, RPG Superstar 2012 is next up and gives us answers to 20 questions in a rather neat interview – heed his advice if you’re interested about the contest, designing etc.

The remaining content of the issue is a selection of 5-star-reviews of yours truly – if you are following my humble endeavours, this is a nice place to check some of them out.

Editing and formatting are very good, I didn’t notice any significant glitches. Layout adheres to RiP’s 2-column full-colour standard and the pdf comes with no bookmarks. The cover artwork, also includes as a one-page, background-less version, is awesome and deserves praise. The pdf unfortunately has no bookmarks, which is a minor bummer. My favourite part of this issue, hands down, is the new template – it’s just awesome and the artwork brings the disturbing creature to life. I also enjoyed Creighton’s excellent encounter and the mini-adventure by Ron Lundeen, though personally, I hope that the sequel somewhat amp up the ante – as written it does provide a nice sidetrek, though his full-length adventures are better, probably also due to more space available. On the downside, the adamantine blade-spell is utterly broken in my opinion and somewhat tarnishes the otherwise nice entry penned by Jonathan McAnulty. While usually this would suffice to send me on a rant, Pathways is free and thus I’ll only detract half a star, for a final verdict of 4.5 stars, which I’ll gladly round up to 5 on behalf of the spell being easily ignored and the rest of the magazine being awesome.

Pathways #15 is available from: