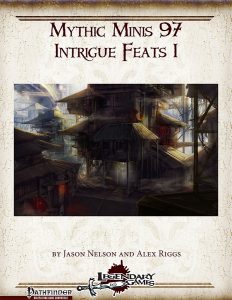 -Agent of Fear: Caps bonus opponents can get versus Agents of Fear at +4. As a swift action, you can use mythic power to reset the bonus at +0 for a single target within 60 ft. Also eliminates being alerted to you if the creature can’t detect you anymore. LOVE it!

-Darkness Trick: use illumination-based weapon even when it’s not active – flames shed no light etc. Additionally, you can use mythic power to make the weapon radiate darkness or generate a dazzling flash. Amazing feat!!

-Enrage Opponent: Enrage opponents with low Int-scores, but at penalty. Also eliminates the maximum number of enraged opponents-cap. Also lets you use mythic power to eliminate the panache cost for 1 minute.

-Feign Curse: Use it as a swift action or immediate action when rendered unconscious, killed, knocked out, etc. When used as a standard action, you get tier as a bonus. If you expend one mythic surge, you may roll twice and take the better result.

-Incite Paranoia: Paranoia incited lasts until the end of your next turn for a mythic foe, 1/2 tier rounds for non-mythic adversaries. Even far-fetched lies are considered to be believable.

-Notorious Vigilante: Use the feat to replicate Dazzling Display as a move action. You can affect all creatures that can see you, regardless of distance and may use mythic power to add 1/2 tier to the check.

-Ostentatious Rager: Earn twice as much when using feats of Strength/Intimidation to earn money. Also makes you REALLY good at causing a distraction. If a foe’s hit due to the distraction, it becomes shaken for the remainder of the feat’s duration.

-Shadows of Fear: Increases fear duration when sneaking or using hidden strike; also makes hidden strike work as though the target’s unaware of you rather than flanked while it’s subject to fear. Each hit after the first in a given round lets you expend mythic power to add hidden strike damage as though it was the first hit that round.

-Subtle Enchantments: Decreases chance to notice having successfully resisted your spell by 5% x mythic tier and increases the DC to notice your enchantments. Nice.

The SRD-page also contains one additional feat, namely Telepathy Tap: Increases the DC to keep you from tuning into both sides of a telepathic conversation. Also lets you, provided you have telepathy or a similar ability, send selective messages to members of the communication. Additionally, for mythic power, this lets you generate telepathic noise that AoE negates such communication. Adore it, another one for the scavenging- toolkit!

Editing and formatting are top-notch, I noticed no significant hiccups. Layout adheres to Legendary Games’ two column full-color standard and it features the artwork on the cover; that’s it – the one page content is solely devoted to crunch. Some feats are underlined differently than others – but since this is just cosmetic, it won’t influence my verdict. The pdf has no bookmarks, but needs none at this length.

Jason Nelson and Alex Riggs deliver in this one – while not each and every feat is excellent, several actually do really imaginative, cool and novel things with the base concepts, often making them cool beyond the confines of being a mythic feat upgrade. I can see several feats herein acting as a perfect scavenging ground for houserules, monsters, etc. – that and the lack of issues make me settle on a final verdict of 5 stars and seal of approval.