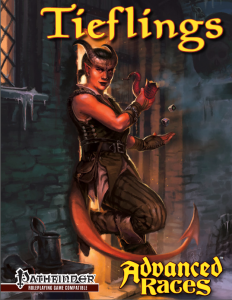 The first advanced races-supplement is 19 pages long, 1 page front cover, 1 page editorial/ToC, 1/2 a page SRD, 1 page advertisement, leaving us with 15 1/2 pages of content, so let’s take a look, shall we?

We kick this pdf off by an expertly written introduction to Tieflings in the context of the Midgard campaign setting as well as, of course, the Tiefling’s racial traits – I’m not going to rehash them here – suffice to say, they are not modified in the Midgard setting – at least on a basic level. That is not to say you may not modify them – there are 6 alternate racial traits for you to modify the tieflings: You may replace skilled with getting +1 to skill checks when in the presence of other tieflings/half-fiends (even if they’re hostile!), replace their sorcerous aptitude with +2 to caster level checks, replace the usual spell-like abilities with cause fear  Another trait replaces skilled with +2 to Bluff checks to lie and +2 to Sense Motive  to discern lies. Marilith-descended tieflings can replace fiendish resistance and spell-like abilities with +2 to CMD and may deal 1d3 points of constrict damage with grapples that increases by +1d3 for every 5 levels. Alternatively, you may play a tiefling with sheltering wings that can be wrapped around their bodies as a swift action for +4 to AC, but also – 4 to atk. Now this is the one of these traits with the coolest imagery – but also the one where the benefits are a tad bit overpowered for my tastes: stacking with fighting defensively, especially at lower levels, makes this an extremely powerful option for tanking characters, especially when coupled with heavy armor. And yes, the wings are very obvious, but seriously – crunch-wise, that’s imho too strong, even when replacing fiendish resistances. Attacks should either not be possible or movement limited. I also consider the lack of bonus to fly skill checks/gliding options a bit of a pity.

On the racial feats side, we get 8 new feats: Increasing base speed to 35 ft, +3 to bluff skill checks or intimidate checks (the latter you can take twice, but suffer -2 to bluff the second time),1/day reroll damage against good foes, +1 to a save of your choice or +2 CMD and CMB via a tail, increase one of your resistances by further +5, and a feat to grow wings – unlike the alternate racial trait, these only offer +2 to AC, -4 to atk, but if you also have the trait’s wings, you get +4 to fly-checks – which is nice, I guess, but honestly not that great a payoff for a feat since the feat’s bonuses don’t stack with the wrapping wings of the alternate racial trait.

Next up are the archetypes – fighter may opt for the Damned Defender, a fighter with threatening glares who gets a slam attack that may slam foes back. Hellcaller sorcerors can call demons and devils sooner than other casters. The archetype also comes with notes for demon, devil and daemon-summoning hellcallers. Bards may opt to train as Master’s Ambassadors of the dread master of Demon Mountain, temporarily charming foes and coming with bombastic entrances. Somnambulist wizards can make sleeping creatures their puppets, keep sleep spells viable throughout the levels and prepare restful sleep as a wizard’s spell. Redemption seekers are good clerics who can cast a domain spell at +2 levels when prepared in a domain slot and loses two domain slots when preparing the spell. Okay. So what does that have to do with a) tieflings or b) seeking redemption? This has got to be one of the flimsiest archetypes EVER.

9 new spells are next, from  implanting suggestions in the mind of the sleeping, making shadow fey friendly, a spell that makes it possible to forego the improved familiar feat when calling a demon/devil to serve you thus, modify ley lines, fire rays that are particularly deadly for elves and elfmarked or conjure forth acidic rain or extremely lethal vampiric fog. Oh, and there is a spell to direct the sleeping great old ones towards your destination – not fast, but still…ouch!

Speaking of ouch: David “Zeb” Cooks excellent article on tieflings, written mostly in IC-prose is interspersed throughout the pdf – and it was originally 5 pages, so if you already had that one, you’ll be getting some content you’re already familiar with. Still, I love the article and its take on Tieflings – though what I honestly don’t get is why this pdf failed to address the original one’s GLARING balance issues, namely a table of alternate racial abilities that can be taken from a d% table in exchange for their spell-like ability. I love the idea that it’s not necessarily under the tiefling’s control and overall, the balancing is nice – with two exceptions that stand out like sore thumbs: Shadowsteel AUTOMATICALLY lets you ignore the first AoO you incur EVERY ROUND. No limit – no chance to ignore it – flat-out no-dice. Broken. And then there is heartseeker: Always do max damage on confirmed crits. Yeah. Right. I’m not going to dignify the existence of this horrid piece of brokenness by elaborating how easily this can be abused to death and why it’s insanely OP. +1d6 sneak attack damage also feels excessive to me.

We also get new items – infernal stink bombs, tiefling booze, a shadowstepping cape and a gem that lets you lesser geas good creatures.

Editing and formatting are good, though I noticed a couple of minor glitches like words not properly printed in bold letters etc. Layout is beautiful and adheres to Kobold Press’ gorgeous Midgard 2-column standard and the full color artworks are a sheer joy to behold. The pdf comes fully bookmarked for your convenience.

Okay, let me get one thing out of the way – this is a Midgard supplement through and through. While the content herein can be reappropriated towards other settings, you’ll lose a lot of the specific cool nudges here and there in the process – this is all about Midgard. Defiantly and proudly so. Amanda Hamon has crafted several options herein that are neat indeed regarding their fluff and all those little story tidbits woven into the crunch are neat indeed. That being said, when not using Midgard, you’ll lose some of the crunch: What use is a spell to direct Great Old Ones if your world doesn’t feature them? The same goes for the shadow fey charm. That being said, it is said options and the ley line modifying spell that made me grin and enjoy the content – thus me feeling the need to mention this.

Now I wouldn’t harp on a couple of setting-exclusive options – in fact, I tend to love those, but the thing is: The crunch, once you take the fluff away, more often than not feels just…Well, sorry to say it, BORING. +3 to a skill-check? Wow, never have seen that one before. /sarcasm.

Sorry, I try not to get asinine, but seriously – that is not compelling design. Why not play with the tiefling’s racial traits? Lowering/shifting resistances, improved defenses versus the creatures of the lower planes, angel-killing options…something like that, something that truly ties in not only fluff-wise, but also in the crunch of the race? As written, the options are rather generic in their benefits and could have used a closer tie to the tiefling’s racial abilities. And then we have the issues: The defensive wings are simply broken as written (I can get behind the feat, but the ones from the racial trait…REALLY?), allowing for much too easy tanking at low levels and then there is the inclusion of David “Zeb” Cooks article: 1:1 from KQ #6, without fixing the evident and glaring balance issues in the one piece of crunch said article featured. Yeah – max damage on every crit. Always ignore the first AoO every round -no roll, no acrobatics, no CMB/CMD-interaction – nothing…Come one, that’s simply so much less in care and quality than I’ve come to expect from Kobold Press.

And it sucks – really: Amanda Hamon has written a supplement that, in combination with said article gets a 5 out of 5 on the fluff – it’s glorious. But the crunch falls flat on its face, offering boring, bland bonuses even when used in Midgard, featuring balance issues here and there. When used in a setting that’s not Midgard, you’ll lose some of the coolest pieces of content herein. And the archetypes feature too many one-trick ponies, they are simply not that impressive and often show a distinct lack of unique abilities/cool options. The Damned Defender gets a 1d4 slam that upgrades to 1d6 at 17th level. Wow. That just plain sucks on a damage-scaling perspective. I like the archetypes’ idea of tying said slam to dropping foes prone and moving them – but the execution! In PFRPG, that kind of stuff is DONE VIA SPECIFIC COMBAT MANEUVERS. Not via “attack results in ref saves”. The two archetype that are a hit would be the somnambulist, especially when tied to the Midgard-fluff – and the ambassador of the Master of Demon Mountain: Both are mechanically and fluff-wise well executed.

*sigh* As much as I LOVE the fluff, I can’t recommend this pdf. Fans of Midgard should get this for the fluff alone and the neat mundane items (The magic ones once again are boring – a cape to shadow jump? How many times have I seen that one again?) and awesome (very specific) spells. Beyond Midgard, though, I don’t see so much use here – and crunch-wise, DMs should take heed whether this one should be allowed or not.

All in all, at least for me an utterly disappointing offering, in spite of the great fluff and beautiful art -and evidence to the contrary; the author CAN create awesome crunch – there are some instances in here… and hence my final verdict will clock in at 2.5 stars, rounded down to 2 for the purpose of this platform.