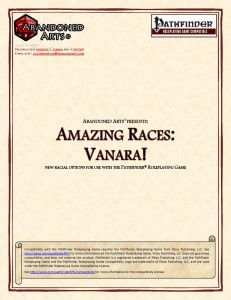 All right, by now you know the drill – 4 pages, 1 page front cover, 1 page SRD, leaving us with two pages of content for the Vanara, so let’s take a look!

Contrary to what the intro-box would make you believe, this pdf starts with 5 new feats for the Vanara-race, not the Kitsune – though these also have their installment in the series.

So what are the feats?

-Ki Cloud: Spend 2 ki to generate a fluffy cloud that nets you a perfect maneuverability and flying speed equal to base movement for 1 hour – and yes, strong winds can dissipate it, as does any action that would break invisibility – like attacking. VERY cool and iconic, if a bit strong – but sometimes coolness trumps all!

-Prehensile Toes: Hold object with your feet – but not move except to climb or attack. Neat!

-Vanara Flip: As a swift action, flip around and transfer items from hands to feet or vice versa. Cool!

-Vanara Feint: When doing a Vanara Flip, feint as a free action – Neat!

We also get two new character traits – one that makes you count as having a running start when jumping from climbing a vertical surface and one that allows you to wield branches as quarterstaffs sans penalty.

We also get two new alternate racial traits – Dexterous Tail replacing nimble and allowing a Vanara to cast a spell while grappling on a successful concentration check, whereas Serene Striker allows the Vanara to use wis instead of str/dex with their AoOs, also in exchange for the nimble trait.

The issue’s racial archetype is the Agile Arcanist, a magus archetype with diminished spellcatsing, but in turn the archetype gets canny defense, may substitute arcane pool points for ki points with regards to taking feats and using them as well as evasion etc. – elegant design that may utilize a lot of existing material in interesting ways – I like it!

Editing and formatting, apart from the mentioned introductory guffaw, are top-notch  -I didn’t notice any significant glitches. Layout adheres to Abandoned Arts 2-column no-frills standard and the pdf comes without bookmarks, but needs none at this length.

I don’t like the Vanara-race one bit – and here I am telling you: This is steeped in lore, iconic and all-killer, no filler: Each and every feat feels properly and uniquely tied to the race, the traits/alternate racial traits rock and the archetype is concise, innovative and versatile while allowing you to create a character truly different that captures well what magical Vanara duelists should be about. Racial supplements have a hard standing with me, but this one succeeds in each and every way with bravura – and hence is worth full 5 stars plus seal of approval – Daron Woodson has done an extraordinary job here!