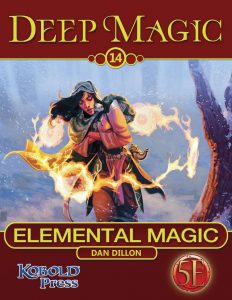 This installment of the Deep Magic-series clocks in at 16 pages, 1 page front cover, 1 page editorial, 2/3 of a page SRD, 1 page advertisement, leaving us with 12 1/3 pages of content, so let’s take a look!

We begin this pdf with a discussion on the dangers of elementals existing in the material plane and elementalism in general, including a nice little section on the role of these magic traditions in Midgard. Traditions? Plural?

Yep, we get a sorcerous origin, a warlock otherworldly patron and a wizard arcane tradition on the class option side of things. We also receive two new feats: Negotiator increases Charisma by 1 to the maximum of 20 and lets you retry a failed Charisma (Persuasion) check at disadvantage. It also lets you haggle for a 10 % discount with a contest (and a 1-week cooldown per person to prevent abuse) as well as halved living expenses. The second feat, Survivor, increases Constitution by 1 and makes you require only half the food and drink. Additionally, it makes you automatically pass the save versus extreme cold or heat for Constitution or Wisdom modifier days, whichever is lower. This resets after 2 hours in a comfortable environment. Nice feats!

Let’s begin with the elemental essence sorcerous origin, shall we? We choose an elemental heritage at 1st level, which not only governs the elemental bonus language you get, it also determines the type of energy associated with your latter class features: Earth corresponds to bludgeoning and air gets to choose between lightning and thunder, just fyi. Also at first level, you can use your bonus action to manifest an elemental aura for 1 minute, which lets you use your reaction to being attacked to impose disadvantage on the attack roll before it is stated whether it hits or misses. Casting a spell while the aura is active makes your immediate vicinity laced with your chosen element’s damage type, causing minor damage to those within 5 ft. (or that enter the square). The damage increases to 2d6 at 7th level. The aura lasts for a minute and can be used twice per long rest interval.

At 6th level, whenever you damage a creature with a spell, you can spend a sorcery point to lace the spell with your elemental energy, adding a no-save debuff to it: For air, this would be an inability to take reactions, for earth partial and short-lived, restraining, for fire it’s the frightened condition and for water, the poisoned condition. Potent, but interesting array. At 14th level, the sorcerer can, as a bonus action, teleport up to 60 ft. to an unoccupied square that he can see, reappearing with elemental energies suffusing them. There are additional effects, depending on the heritage element. Here, we get cyclonic, potentially briefly blinding bursts of wind, bludgeoning damage + prone, damage + ignition or potential choking. All of them, however, require a presence of the associated element in the vicinity, adding tactical depth here. The feature may be used twice, regaining all uses on a finished rest interval. At 18th level, we get elemental scout, which nets immunity to the associated heritage element and potent moving options: Burrow, swimming, flying…you get the idea. Each of the elemental options also sports an active component powered by sorcery points, which range from buffs versus physical attacks to igniting folks in the vicinity to becoming as unsubstantial as a breeze. One of my favorite sorcerous origins. Well done!

The warlock patron mentioned before would btw. be the genie lord, whose expanded spells range from chromatic orb and thunderwave over sleet storm to creation and wall of stone. Of course, conjure minor elemental is also part of the deal. First level yields Genie Lord’s Favor, which nets Primordial – the language from which the elemental tongues developed and which can be understood by all of them, making you basically an elemental polyglot. The patron also nets a token, which doubles as an arcane focus. The gem also can absorb fire, lightning, thunder, acid or cold damage, holding up to twice your warlock level + Charisma modifier (Charisma should be capitalized in the text). This is RAW not an action, but considering the limited threshold, I’m good with that. While the gem holds energy, you can use your action to cause it to shed light and losing/replacing it is covered. Minor complaint here: The gem, RAW, does not divest itself of stored energy. Once stored, the energy’s there. I’m pretty sure that the gem should replenish its reservoir after a short or long rest.

At 6th level, energy stored in the token may be spent to add up to Charisma bonus (min 1) damage to attacks or spells, choosing the type from the elemental damage list, including thunder. This extra damage only applies to a single target, but you may spend additional points to damage targets beyond the first. The gem’s protection may now be extended to allies within 30 ft. of you as your reaction. The 10th level feature lets you reroll after making an attack roll, save or ability check or damage roll, taking the higher result. This may only be used once per rest interval. The 14th level feature lets you assume, as a bonus action, a djinn-like form that nets flying speed, advantage on saves versus magic spells and effects, immunity to one damage type and +3d6 energy damage with a spell/attack once per turn. There are 4 expanded pact boons as well. Mephit form for the pact of the chain familiar; changed damage type for the pact of the blade; immunity to the elements for the pact of the tome, and we get a new 9th level eldritch invocation that nets planar binding once per long rest interval.

The third option would be the Elementalism arcane tradition for the wizard. 2nd level nets an Elemental Focus table that lists the four classic elements, with associated languages and damage types, with earth corresponding to acid and air allowing for the choice of lightning or thunder as damage type. Spells that inflict the associated damage type may resonate with the focus – the GM remains the final arbiter. Such spells can be copies into the spellbook at ½ time or gold. One of the new spells gained on a level up can be such an elemental spell, even if you haven’t encountered them before. Additionally, 2nd level and every 4 levels thereafter allow you to choose from a mastery and when you learn a mastery, you may replace one that you have with another one. DCs, if applicable, use the spell save DC. More on masteries later. 6th level allows you to change the damage type of damage dealing spells to that chosen for the elemental focus. 10th level allows you to use your reaction to take no damage when subjected to damage from the energy associated with the elemental focus, regaining hit points equal to half the damage you would have taken. It may be used Intelligence modifier times before requiring a long rest to recharge. 14th level lets you ignore immunity to the energy type associated with your elemental focus. This may be used Intelligence modifier times before requiring a long rest to recharge.

The masteries mentioned before include adaptation to other planes, a form of specialized planar binding, resistance to the associated element’s energy and advantage on Con-saves to maintain concentration regarding maintenance of such spells, a n elemental-charm, making targets temporarily vulnerable to energy….etc. We also geta few element-themed masteries, like igniting targets with fire spells, adding a temporary slab of stone that nets cover – cool! I would have actually loved to see more of these!

The spells include two cantrips, the first of which would be wind lash, which inflicts slashing damage and move the target 5 ft. away. Pummelstone deals bludgeoning damage and imposes a -1d4 debuff to the target’s next attack roll or ability check. Both cantrips are balanced and interesting.

At 1st level, we get wind tunnel, which is a cool support spell for ranged weapons and movement/debuff – it’s obviously harder to move against the wind. This spell is amazing, incredibly useful and a perfect example of a versatile and fun 1st level spells. Tidal barrier is a means to render terrain around you difficult and move creatures away from you. Nice one. The second level spells include spire of stone, which can be used to knock targets prone…or lower/raise you, which is incredibly iconic. Rolling thunder deafens targets and wraps them in thunder energy and halves the speed of the target, until they succeed a save. The 3rd level spells include riptide, which can restrain targets and generate either riptides or undertows, making it basically a two-in-one spell. Pretty cool! Frozen razors is a damage spell that causes a combo of slashing and cold damage, which also can help by reducing the speed of targets.

Flame wave causes damage in a 40 ft. cone and can push targets away. Earthskimmer makes earth move you, ignoring difficult terrain and enhancing your Dash by allowing you to basically crash into targets. Cool! At 5th spell level, frostbite is a Concentration, up to 1 minute, constant cold damage + debuff spell for one target, while acid rain generates a cylinder of…well, acid rain. Blizzard causes cold damage that also carries a disadvantage to Con-saves to maintain Concentration for those that suffer damage from it. 8th level’s caustic torrent generates a devastating line of acid, which can insta-kill foes reduced to 0 hp. Oh, and its fumes are poisonous. Finally, 9th level’s pyroclasm has a massive 500 ft.-range and causes a lava-eruption, which then will proceed to expand. Oh, and the lava sticks to targets, hardening and encasing targets. Amazing!

On the SRD-page, we also get a new magic item: The rare magma mantle requires attunement and nets resistance to cold damage. The mantle can be transformed via command word to a mantle of flowing magma that renders you immune to its own intense heat (but not other fire-sources) and foes that strike you with melee attacks while within 5 ft. take fire damage. For the duration, you take no damage from lava and may burrow through it at half your walking speed.

Editing and formatting are top-notch on a formal and rules-language level. Layout adheres to a 2-column full-color standard and the pdf sports neat full-color artworks, some of which will be familiar to fans of Kobold Press. The pdf comes fully bookmarked for your convenience.

Dan Dillon did not have an easy task. Most elemental magic spells released for any iteration of (A)D&D/d20, are frickin’ BORING. They are damage-dealers with different coats and shapes and that’s it. This one is different. Sure, there are plenty of damaging spells herein, but each of them has some sort of utterly unique component that adds a utility or tactical depth to them. The class options are cool as well. Dan Dillon provides an immaculately-balanced, creative supplement here, one that left me bereft of any serious complaints. My final verdict will clock in at 5 stars + seal of approval. Here’s to hoping that maestro Dillon gets to write more such amazing pdfs!