The Secrets of Divine Channeling 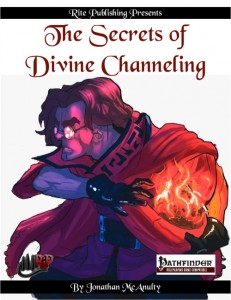 In the fine tradition of Rite Publishing, the book starts with an aptly written in-character introduction to the ideas presented herein. The introduction and first chapter take up 5 pages and feature a new trait for minor channeling. The idea of channeling is presented in two ways: On the one hand, clerics can choose the trait to gain access to minor channeling abilities or they could take two feats to get up to 6 new things they can do in combat via channeling their divine energy, which is domain-specific.
However, if that is not enough for you and you want to go all out, you can also play the divine channeler, a new base class. He has d8, 4+Int skills, medium BAB, good fort and will saves as well as some massive channeling abilities – to trade this off, his spell-selection is more limited than the cleric’s and he can’t cast as many spells per day.
The next chapter, feats, takes up 2 pages and features the aforementioned feats for the cleric. I liked the 8 feats, none seemed over-powered or under-whelming.
The bulk of the book (24 pages), though, is taken up by the domains and their respective channeling abilities. Each Doamin features a sensorial image, i.e. how the channeling of the divine energy manifests itself, which I found quite cool, a minor channeling effect, a combat domain channeling effect and two major channeling effects.
I’m going to give you an example on what to expect and, due to being so cheerful, I choose the Madness domain!
Sensorial Image: Purple and scarlet energies, swirling air currents, and a faint stale, musty odor.

Minor Channeling Effect: Imbecile’s Tongue makes it impossible for the victim to communicate.

Combat Channeling Effect: Breath of Madness boosts the combat capabilities of the targets for WIS-damage and could be used offensively and defensively.

Editing and formatting is top-notch, as I’ve come to expect from Rite Publishing. The interior art is ok, although nothing to write home about.

When I first read this book, I have to admit that I didn’t get the hype around it. Yes, it is a fair book, but I just didn’t immediately jump up from my chair, wanting to implement this, possibly because the book is necessarily campaign-setting neutral. I let the idea gestate for about a week. And gradually, subtly, I started to realize what the content in this book does – It makes it possible to customize THE HELL out of any cleric and offers a variant (un)holy-man-class that is closer to the aspects of his deity than the cleric in some regards, without unbalancing the game. The abilities are cool and should help just about any divine caster to greatly diversify the options he has while providing an entertaining alternative to the cleric. Best of all, channeling makes individual divine casters of different gods much more unique and diversified and should be considered a boon to DMs and players alike, especially those who don’t want to build another “evil cleric” that swats around the same spells as all the other evil clerics. The sensorial images, while being short paragraphs, add A LOT of flavor to the different domains. Sooo…what would I have liked to see that wasn’t there? Well, even more domains. And campaign-setting specific domains with more fluff. And PrCs for the divine channeler. That’s a good sign and I sincerely hope that Rite Publishing expands on this great concept in e.g. their Questhaven project and put out a “Secrets of Divine Channeling II” one of these days. It’s a subtle, humble book, but it will enrich your gaming, I guarantee it.

My final verdict is 5 stars.