The Genius Guide to the Godling 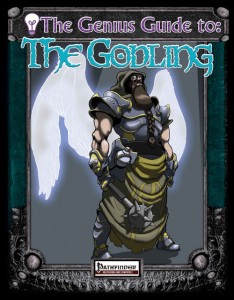 Wait, Godlings? Plural? Yep, two Godling-base-classes are presented (though you can’t multiclass from one to the other) and a PrC-option is also included.
What are Godlings? Well, they are like e.g. Theseus, people with the blood of divinities, who, by trial (i.e. adventuring) might one day rise to the exalted level of demi-gods.
The first one is the Mighty Godling, who gets d12, 2+Int skills, good BAB and good fort and ref-saves.

The Clever Godling gets d8, 6+Int skills, ¾ BAB and good ref and will saves.
Both use the same mechanics: At first level, a Lineage is determined, i.e. the ability to use domain powers (but not domains) associated with his heritage. To further customize the godling, two major ways are offered. The first one you probably came to expect, namely talents. The Godling gets access to so-called Scion Talents (13 are presented) and Greater Scion Talents (of which we get 5) that range from rather mundane evasion to gaining minor DR, trapfinding, spotting invisible foes to the extremely neat “counter power”, which lets Godlngs counter supernatural attacks, either via CMB or Knowledge, calling to mind some of the heroic feats attributed to our legends. I would have loved to see a bit more such scion talents that go beyond e.g. “gets sneak attack” and rather offer such original abilities.

The second mechanic to customize your Godling is the divine trait system, in which the godlings get progressively larger amounts f divine trait points and can save and invest them permanently into 7 ability-trees, each of which features 4 ranks. The Trophy Taker is a cool, imaginative example for the coolness of the mechanic: Practitioners can carry around trophies and make them duplicate magic items in function without blocking one of her item slots and even enhance her own magic equipment. Higher ranks let a Godling duplicate the effects of more expensive magic items with her trophies. Nice! The divine traits, all said and done, are at least in my opinion, well-crafted. If one were nitpicky, one could call e.g. “Hardy”, which eliminates food, drink, poison etc. from the potential threats of the Godling, rather bland, but I consider it iconic enough to like it.

The capstone ability sees your ascension to demigod-status and while sufficiently powerful, is still playable – now is that cool?

The PrC-Godling gets d10, 4+Int skills, a good BAB, medium fort and ref saves and cannot choose freely from said divine traits, but is limited to a linear progression in one divine trait, thus severely limiting the appeal of the PrC – all in all, it feels like a bonus and a rather bad option when compared to the base-classes.
The pdf closes with advice on how to use Godlings in your campaign and a feat to enhance the lineage ability for multiclassed Godlings.

Conclusion:
Editing and formatting are top-notch, I didn’t notice any glitches. Layout adheres to the three-column standard and the full color artwork is ok. The pdf has no bookmarks. The guide to the Godling offers us a cool and fresh take on the idea of people with divine blood coursing through their veins. Mechanically, I don’t have anything to complain about, apart from the rather lackluster-feeling PrC – I think most characters might be better off by multiclassing into one of the base-classes presented herein – they’re at least in for a more versatile experience. The crunch, as I’ve come to expect from most SGG-books, is quite cool, although I would have liked to see more Godling-style Scion-talents instead of just “I can use X, too!” –counter power being a prime example of both style and substance. Due to the slightly too many abilities from other classes and the, at least in my opinion, rather bland PrC, I’ll settle for a final verdict of 4.5 stars, rounded down to 4 for the purpose of this platform.