The Genius Guide to Mystic Godlings 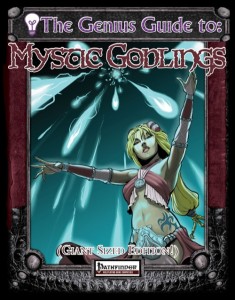 This pdf is 18 pages long, 2/3 of a page front cover, 1page editorial & SRD, leaving 16 1/3 pages of content for two new kinds of Godlings, the Adept and the Eldritch Godling, both of which are inclined to the more magical aspects entwined with their divine heritage.

The Adept Godling gets d8, 6+Int skills per level, ¾ BAB, good ref and will saves ans spellcasting of up to 6th level.

The Eldritch Godling gets d6, 2+Int skills per level, ½ BAB, no good saves and access to full spellcasting.

Which brings me to an interesting design choice: Rather than make the Godling-casting bland, their spellcasting is different from other classes. While extremely limited in the number of spells they know, they can choose spells from both divine and arcane lists and cast them as such. Even better, their magic, powered by divine right, makes it hard to be dispelled, negates arcane spell failure chance and neither do they have to concentrate, making for a completely different playing experience that sets the Godlings apart- sweet!

Spellcasting Godlings get access to ascendancies, special acts of will that can be applied to her mystic prowess. Ascendancies don’t influence the caster-level and you can e.g. choose to replace regular damage for elemental damage. 7 minor ascendancies and 3 major ones are presented. Like the rather physical Godlings, Mystic Godlings get access to lineage domains and divine traits. 5 new sets of divine traits à 4 ranks are presented – nice to expand upon the divine traits in the first Godling-book, but when this pdf is taken on its own, I think there could be more. Quality-wise, though, they rock.

5 new Scion Talents are also introduced and what can I say: I complained about more unique ones and here they are – they may be only 5, but each is a killer worth being used in a given game. From tegh sigil-marked who can absorb scrolls into his skin to the Godlings with malleable, ever-changing features, great ideas abound.

The capstone ability is once again the transformation to demigod-status.

No casting Godling books sans magic, though – next up are the exclusive Godling spells, which can only be cast by those of divine blood. The first one would be a selection of 9 “By the Blood”-Curses, one for each spell-level. The extremely modular curse offers additional options for each lineage the Godlings unlock, making for a plethora of complex curses that rock. Another spell lets you access your private sanctum demiplane. There is also a 9-level set of spells called Manifest, which lets you cast all spells of certain descriptors that are determined by your lineages. Even cooler, there are Suspend spells for divine and domain access – powerful, yes, but also quite cool and once again makes the Godlings more unique!

Finally, the pdf offers us new feats that grant access to some Godling abilities for regular people, more divine trait points, an extra scion talent or learning one of the cool, powerful Godling spells.

Editing and formatting are top-notch, I didn’t notice any glitches. Layout adheres to the three-column standard, artworks are rather average and the pdf has no bookmarks. Mechanically, I really loved this book: It would have been easy to just give Godlings spellcasting and leave it at that, but the special rules for their spellcasting and the unique spells in combination with divine traits and scion talents make for cool classes. While I think that without the other Guide to the Godling, the scion talent and divine trait selection is a bit slim, we still get a lot of content in this one. In combination, though, the two books become an utter delight. This pdf is absolutely superior to the other Godling-book, offering more unique abilities, talents etc. that enhance the flair of the casting Godlings and sets them apart from mere mortals. Due to lack of true points of criticism, excellent mechanics and tightly-written content, I practically have to settle for a final verdict of 5 stars.