The Genius Guide to the Godling Ascendant 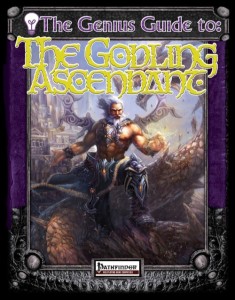 The diverse Godling-classes from Super Genius Games’ brilliant Guide to Godlings and Mystic Godlings are popular due to their great diverse flavor supported by excellent rules-crunch – they are scions of the gods, Heracles-in-the-making, heirs to the divine. RiP’s 101 Renegade Class Features offered some new feats for them and now we get this massive pdf containing quite a bunch of new material. But can it stand up to the stellar standard of its predecessor-files?

We are introduced to 7 new divine traits ranging from Horse lord (for mounted godlings) to legendary beauty (which is not dependant on Cha) to preternatural senses. Unfortunately, the 4th tier of the rather complex mystic inheritance trait is missing, which is a pity – the trait is cool and grants limited access to arcane school or sorceror bloodline and balancing the higher tier abilities is quite difficult to do on the fly. EDIT: Owen clarifies this is intentional. I would have loved a 4th tier nevertheless.

Unfortunately this omission is not the only glitch that could have easily been avoided in this pdf. Moreover, the tendency to allow access to other class-abilities somewhat feel diluting to the special nature of the godling, another example being the resourceful combatant trait, which features improved dirty tricks and feel not like divine abilities, but more like skill.

Let’s take a look at the 10 new ascendancies. The new ascendancies are mostly focused on special usages of magic, including the ability to cast a touch-spell at the end of a charge, get improved defensive casting or even access to hexes. While I like the latter idea, I maintain it dilutes the unique flavor of the class. Balance is a bit off as well – while a +2 bonus to AC for casting a spell as a full round action is rather weak, casting a full round action spell as a standard action and halving the casting time of other spells with casting times longer than a round is rather powerful. The 10 major ascendancies are also mostly focused on magic, but effectively feature very interesting mechanics, like converting spells to power words and a mechanical stroke of genius: Immortal Invocation lets you cast higher-level spells with lower level slots and make it work balance-wise. Kudos for this one! Accessing primordial, raw magic for varying effects is also an excellent example of great design.

We also get 31 new scion talents and they range from aforementioned access to other class abilities like channel energy (which I consider a bit bland) to abilities that add negative conditions to your piercing/bludgeoning/slashing damage or substitute ONE mental attribute for all governing attributes for saves. I.e. INT replaces Con, Dex and Wis as the attribute that gets its modifier added to saves. Additionally, some godlings can use this modifier for 3 skills of their choice. OP anyone? This class of talents (there’s also one for Cha) is insane and so prone to min-maxing I consider it BROKEN. A monstrous rage for botching, being sneak attacked etc. on the other hand rocks and is a great catalyst for rping. Yeah, it does cross over with the barbarian’s territory, but is different enough to be considered original. And then there’s Retribution.
EDIT: I had a factual error here: Retribution allows you to make one attack at full BAB, not a full attack as a result of being hit. Alternatively, you might cast a ranged touch or touch spell with a casting time of one standard action or less as an AaO. Not as bad as I thought, but still rather strong.

I really did enjoy the scion of…talents, as they expand upon the portfolio of the deific parentage and the 4 aligned to the winds have an extremely cool payoff: If you learn all 4 Scion of the Winds talents, you can learn to turn into a whirlwind of destruction via a greater scion talent.

10 Greater scion talents are presented as well and seeing the power they ought to convey, I’m a bit torn. Divine weapon lets you summon a weapon of divine energy, which, while cool, would have been better if it was a) either more powerful or b) accessible as a scion talent. One greater scion talent I loved in its iconic imagery was Line f destruction, which lets you make an attack against every creature in your path as a full-round action, making this essentially a mobile whirlwind attack. Badass! Dispelling via melee attacks also feels Godling-style and it is in these that the sheer uniqueness of the class shines again.

The next section will be of varying utility for you – if you use card decks like fumble and crit decks, you get 7 scion talents for use with them. Personally, I don’t use them. Seeing that there are a lot f decks out there, the mechanics mostly focus on draws and, at least in my game, won’t see any use.

Next up are 5 new godling feats, 3 of which grant you extra class ability xyz. Pantheurge qualifies you as two additional types of godling which on the one hand sounds cool, but the feat should be carefully monitored – it could be abused. Spark of Divinity makes mortals with an attribute of 18 or higher qualify as a godling. While I like the idea, I’d limit it to first level. After all, which PCs does not, somewhere in his/her career surpass 18 in one of his/her scores?

We also get godling-related options for other classes: Deific studies for the wizards, a godling bloodline for sorcerors, a godling domain and the great hero advanced archetype for the fighter class. Especially the latter is a rather cool archetype and is great for destined heroes. Oracles get the Immortal mystery and 7 revelations, the coolest being the creation of a demi-plane to house a pantheon (which you might herald!). Neat ideas.

Finally, we get advice on how to make a kind of godling monster, so called exemplar creatures to reflect THE minotaur of the labyrinth, THE harpy of the jagged cliffs etc. I enjoyed this section.

Conclusion:
While formatting is good (apart from the one divine trait omission), editing is one of the aspects of this pdf that falls painfully short of the usual SGG-quality. There are quite a bunch of typos, glitches, homophone-errors etc. – enough to severely annoy me while reading the pdf. The pdf comes with extensive bookmarks and features beautiful artwork, some of which I’ve already seen quite often in other publications, though. This pdf at once features awesome ideas and is a terrible disappointment for me: On the one hand, the spark of genius flutters through these pages and surfaces time and again with excellent crunch-design and cool ideas. On the other hand, not even half of the content of this pdf blew me away. In fact, from extra class ability feats to the rather bland divine traits, several aspects of the pdf felt like filler. I have some balance concerns with several of the abilities and the blurring of the lines between godlings and other classes, both via class abilities of the godling and e.g. the arcane school and similar devices of other classes, I can’t help but feel like this pdf actually dilutes the flavor of the godling. Add to that the subpar editing and you get a torn endzeitgeist. As much as I love the Godling-classes and the concept, I cannot help but feel like “Godling Ascendant” is actually a descent for the classes. Thus, my final verdict will be 2.5 stars, rounded up to 3 due to me really liking the godling and the fact that the class gets some more love.