EZG reviews Secrets of the Taskshaper 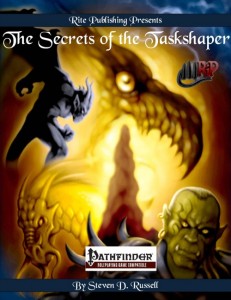 This pdf is 10 pages long, 1 page front cover, 1 page editorial, 1 page SRD and 2 pages advertisements, leaving 5 pages for the new base class of the taskshaper, so let’s dive in.

The pdf starts with the trademark quality prose I’ve come to expect of Rite Publishing books, an IC-told story about how Auberyon, Solstice king of the fey, abducted people and changed them, altered their memories even, to become taskshapers and how they escaped from their bonds.

The Taskshaper-class gets d8, 6+Int skills per level, can select 10 skills at character generation to be class skills, can use any weapons, armors and shields and can use any spell-trigger or spell completion item as if the spells were on her list. The Taskshaper also gets medium BAB, a good Fort and Ref save.

We’re in for a jack-of-all-trades-like class, which becomes apparent when reading e.g. the Moment of Change ability: Starting at first level and improving each level, they get the ability to use change-points from their pool to change one of their feats for one round into a feat whose usage he has witnessed in-game. Mechanics to properly understand a feat for purpose of this ability are given. They can also use these pool points to gain minor plus 1 bonuses or temporarily change skills.

Furthermore, they can choose from a list of 9 shaped capacities that range from being better at emulating others over  improved skill- and feat-changes to mimicing class abilities.

Later, they also get consecutively better at shapechanging, starting with alter self and culminating in the ability to use form of the dragon III and giant form III.

If that were not enough, his modularity is expanded upon by the option to select from 8 different so-called Ability Shifts that range  from the possibility to negate one incoming attack via an opposed attack roll, over being very agile and fast to transformation attacks to be delivered via touch.

The taskshaper does not stop there, though: At 10th level, the taskshaper can choose from another set of 8 abilities that range from a chance to negate crits, doubling her range as well as the ability to change her mind as well into the person/creature she impersonates. Especially this ability, Become the Mask, has the potential to be roleplaying/storytelling gold.

Finally, the capstone ability is a devastating touch that may dissolve almost everything, befitting of level 20.

The pdf closes with a sidebox telling the DM to insist on PC-taskshaper bookkeeping.

Oh boy. Doing the math to look for balance concerns for this class really made my brain hurt and I can only imagine how designing/balancing it must have been. Editing and formatting are top-notch, I didn’t notice any typos and formatting adheres to RiP’s two-columns standard. Layout is ok, as is interior art. The cover is not one of my favorites, especially when compared to other RiP-covers. What to make of the class, then? Well, this is probably the most versatile class I’ve seen so far for PFRPG and an extremely ambitious design goal. While, as far as my math-skills go, I didn’t notice any way to abuse the hell out of the taskshapers abilities, it should be noted that a DM willing to let a player play one HAS to enforce the perception-rules to use class abilities/feats and shapechanges and NOT handwave them. If a player who is known for shoddy book-keeping on his/her character sheet plans to play one of these guys, strongly discourage him/her.

Bookkeeping is necessary to balance this class and due to the shapechanging abilities, some work is required on part of the player. The pay-off, though, should be worth it – this class features some very nice ideas and its other-worldly flair can lend a cool new experience to your game. On the downside, though, I think that the book might have profited from either even more abilities, racial feats or the like – alternative capstone abilities would also have rocked. Alternatively, I would have loved to see a section on their psychology and customs expanded, as they surely have some interesting RPG-potential. Or a critter who hunts the escaped taskshapers for Auberyon…something along those lines. Thus, while the taskshaper succeeds at its design goal, it left me wanting a bit more out of the pdf – not much, but I missed something. It just didn’t feel as well-rounded as some ther race/class-books by RiP and thus, my final verdict will be a solid 4 stars.