EZG reviews Secrets of the Magus

The Secrets of the Magus 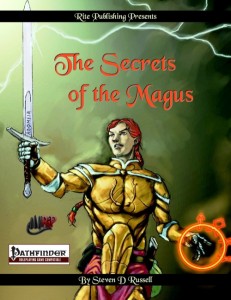 I’ve long liked Gish and once I get finally reviewing some of my SGG-products, I’ll also look at how their takes on the Gish-trope work – for now, though, Paizo has released the lauded arcane knight base class called the Magus in Ultimate Magic, which chances are if you read this review, you’ll possess. To cut a long debate short – whether you like it or not, the Magus-class gets some new toys to play with in this supplement: 34 new magus arcana are contained herein, so let’s take a look at them for now: To come out with it right away – I didn’t have significant problems with any of the new arcana options and liked the additional options they provide for the magus-class.

My favorites were “Damage Shield”, which gives you a kind of buffer for any damage for one round and “Nigh Irresistible Strike”, which can reduce spell and energy resistances as well as damage reductions. Of course, some of the abilities also feature some iconic abilities, like the “Energy Web” that throws a web of deadly energy at opponents and “Charge of the Magi”, which propels you with force towards enemies. “Slice through Wardings” had me experience a knee-jerk “no way”-reaction when I first read it: The ability lets you ignore all magical defenses of the foe. However, it takes both 1 point of arcane pool and it only works for a single attack. I guess I can live with this limit. There are also 4 special song-arcanas associated with the elven/half-elven bladesinger-trope and they ROCK. Oh yeah, “Wave of Mutilation” lets you hit enemies in cones, Sauron-style. Nice!
Furthermore, we get the new “Singer of Blades”-archetype, a cool take on the bladesinger with some rather iconic abilities: The capstone creates replicas of the magus’ weapon and attacks all foes in 30 ft. and the focus rests on mobility and rapiers/longswords. The 7 new feats are nice, I especially liked the “Deny the Afflicted”-feat, which disables the last attack (lowest BAB) of enemies afflicted by your hex/curses – a great feat not only for the magus, but also for the as of yet somehow underpowered Witch.

Finally, there are 2 new items dealing with enchanting weapons and transferring touch spells into arcane pool and even better, we get a cool legacy weapon sword, Mournsky. I’ve said it multiple times and I’ll say it again – I love well-crafted legacy weapons and this one is no exception.

Conclusion:
Layout adheres to the full-color-two-column standard set by the Pathways e-zine and subsequently is beautiful. Editing is good – while the first version still suffered from some glitches, this review is for V.2.0 of the book which has cleared all the typos I noticed in the first version. (Also the reason it took me so long to review this – I’ve rewritten my review.) The pdf is also extensively bookmarked and offers a nice value and additional fodder for the Magus. Balance-wise, I didn’t notice any ability/feat or other piece of equipment. I’m not a big fan of the cover-art, but that’s personal opinion. Usually, a set-up like this would lead to a 5-star-rating, but somehow, I’m loathe to give this one 5 stars – while the book does everything right, I still feel like there’s something missing – not rules-wise, but rather with regards to the abilities. You can do awesome things like walking on vertical surfaces etc., but I didn’t get the “this blew me away”-vibe from this book, thus, my final verdict for this book will be a good 4.5 stars, rounded up to 5 for the purpose of this platform as I think it’s closer to 5 than to 4.