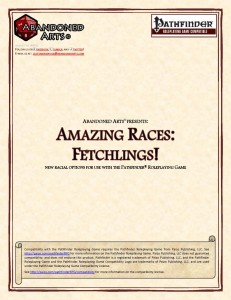 This installment of the Amazing Races-series is 4 pages long, 1 page front cover, 1 page SRD, leaving us with 2 pages of content, so let’s take a look!

-Swift as Shadows: When only traveling 30 ft. or less via shadow walker, you can do so as a move action. Now this one is glorious – simple and yet interesting in the tactical options it provides.

-Shadowed Vigor: Increases cold resistance to 10 and a constant endure elements spell-like ability – unfortunately not specifying which caster level said ability uses. I assume the ability uses default spell-like ability standards, but it could be possible that instead, if applicable, the character’s potentially modified caster level takes precedence. While a very minor ambiguity, it remains an ambiguity.

-Shadowed Vitality: As Shadowed Vigor, with the same minor ambiguity, only for electricity. Also a pity that no stacking benefit for having both feats is provided in either.

We also get 2 new traits, one to net you Diplomacy and Knowledge (local) as class skills and at +1, whereas the second does not net you the native subtype.

-Shadowfingers: +2 to CMB to blind or dazzle foes – nice one!

The race also gets a new wizard archetype (though the archetype fails to specify that the archetype is for the wizard), the Shadowmancer, who needs to have access to the Illusion arcane school. This arcane archetype gets stealth as a class skill, gains his shadow as a variant arcane bonded object that may shroud the shadowmancer and obfuscate him from foes. A cooler ability, though, is one that allows you to create mundane objects from shadowstuff that perish in bright light. The high-level abilities fall slightly behind the awesomeness of his low-level powers, with especially the couple of bonus HP to the shadow companion the shadowmancer gets at 15th level being not particularly impressive.

Editing and formatting are slightly less tight than I’ve come to expect from Abandoned Arts the minor ambiguities in two of the feats and the lack of mentioning the wizard are very minor issues, but still there. Layout adheres to Abandoned Art’s two-column no-frills standard and the pdf has no bookmarks, but needs none at this length.

I was actually surprised by this installment of Amazing Races, as it offers some interesting and cool options to the fetchling-race as well as providing some rather iconic options beyond what I would have expected. Unfortunately, the minor ambiguities and rather lame high-level abilities of the archetype slightly detract from the overall appeal of an otherwise great little pdf, making me settle for a final verdict of 4 stars.

You can get this here on OBS and here on d20pfsrd.com’s shop!