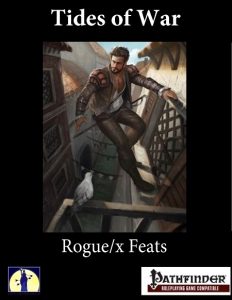 This pdf clocks in at 6 pages, 1 page front cover, 1 page editorial, 1 page SRD, 1/2 a page blank, leaving us with 2.5 pages of content, the first of which, however, is devoted to the introduction to the subject matter at hand – which would be feats for multiclassing rogues.

I assume you’re probably all familiar with multiclassing in the first place, what do these feats do?

-Balancing the Craft: When preparing spells exchange either one hex for a rogue talent you don’t have or vice versa; you have to meet the prerequisites. The wildcard flexibility offsets some of the issues with multiclass rogue/witch characters. solid.

-Devious Empathy: Use wild empathy to lie to animals. Cool idea…but not sure if it’s worth a feat, considering the penalties that still apply and the pretty circumstantial benefits.

-Dextrous Focus: When making a Dex-enhancing mutagen, you may increase the Dex-bonus by +2, but if you do, you also increase the penalty to Wisdom by 2. Nice!

-Energetic Precision: Expend 1st level bloodline or domain power daily uses when successfully using sneak attack to add +1d6 damage and change the damage caused to the type of your bloodline/domain. I like this, quite a lot in fact, though it should probably read “limited use bloodline or domain power” as a caveat versus non-limited abilities that cause energy damage. I’d also be more comfortable if this actually specified the types of energy, but ultimately, that’s more of a cosmetic gripe.

-Enhanced Magic Talent: Replace the minor magic rogue talent cantrip with a 1st level sorc/wiz spell. If you gain major magic as a rogue talent later, you gain a 2nd level spell instead of the 1st level spell. For a FEAT? So, I have to waste one or two rogue talents AND a feat for one lousy 1st level spell? Some sorcerors may go for that, but it’s a sucky deal for them. Not starting with wizards…

-New Levels of Daring: Whenever you use Acrobatics or missed by enemy attacks and more than 2 attacks of opportunity miss you, you gain 1 grit or panache. When an attack hits you that round, you don’t regain grit. You can only do this either Cha (panache) or Wis (grit) bonus times per day. *Reviewer puts away the bag of kittens for now…*

-Sneaking Glance: As an immediate action, if a target of your glare is denied Dex to AC and is hit by an ally in melee, you may add your sneak attack damage – 1d6 to the attack, usable Cha-mod times per day. Interesting mesmerist-crossover here.

Editing and formatting are very good on a formal level, good on a rules-language level. Layout adheres to Flying Pincushion games’ two-column full-color standard and the pdf sports solid stock art. I am not a fan of the final page’s half-empty state – some sort of stock art (or more content) would have made that look less…empty. The pdf has two bookmarks in spite of its brevity – nice.

Frank Gori’s multiclass feats for rogues vary in power and coolness a bit; the witch-feat, for example, completely outclasses the sorc/wiz-feat. and there are some minor hiccups in the finer points of the rules-language. That being said, for the low price-point, this still has something to offer for the discerning roguish dilettante. My final verdict will hence clock in at 3.5 stars…and while I consider quite a few feats herein pretty solid, they feel a bit less streamlined than in the magus-pdf. In the end, I consider this a mixed bag on the slightly positive spectrum of things, but still have to round down for the purpose of this platform.

You can get these inexpensive feats here on OBS!
Endzeitgeist out.