Quests of Doom: War of Shadows 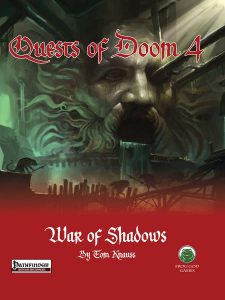 This review was requested by my patreon supporters, to be undertaken at my convenience – and I wouldn’t have reviewed this one usually. Why? Because the module is the final part of a series of adventures, which were first published in the criminally-underrated Mountains-sourcebook “Mountains of Madness.” Full disclosure: I was a backer of the KS to fund Mountains of Madness, since I genuinely consider the Perilous Vista books by Frog God Games to be some of their finest work for PFRPG. I briefly talked about the module back then, but my patreon supporters wanted a more detailed analysis of the module in question, so here we go!

Okay, so first things first: “War of Shadows” is the direct sequel to “Between a Rock and a Charred Place” – running it on its own is not the best idea, as the module loses much of its impact. That being said, it’s much easier to set up than the previous one – a call to arms issued by the dwarves is all it takes to kick it off. The module is intended for 8th-level characters, and as always, a well-rounded group is recommended. The module features read-aloud text for key-encounters and dungeons, but not to an excessive degree. Finally, it should be noted that, like its predecessors, it is pretty deeply ingrained in the lore of the Lost lands-setting; while it is very much possible to adapt the module to other campaign settings, it does take a bit of work, as the political situation of the region depicted here does matter.

Okay, as always, the following contains SPOILERS – this time, that’s includes the previous module. You have been warned. Players should jump to the conclusion.

All right, only GMs around? Great! The masterplan of Grugdour, hobgoblin warlord and secretive devotee of the shadow deity Mirkeer, is in full motion. The clever hobgoblin warlord’s allies may have failed with their coup d’état/assassination attempt in “Between a Rock and a Charred Place”, but that does not put a stop to his plans. His sights on Tyr Whin, he had someone spread a contagion affecting only dwarves in the place, and if things had gone according to plan, no call of aid from Erod Flan would come, which means that his army will have to take Tyr Whin at the place’s full strength. Thankfully for the devious hobgoblin, the disease seems to be working better than expected, and thus he marches his army, cleverly concealed nearby, towards Tyr Whin.

Enter the PCs – who will face a 120 miles trek through mountainous terrain featuring a couple of scripted encounters. Problematic here: The mountainous features of the region? They are referred to as “see A Little Knowledge” and “Between a Rock and a Charred Place” – so no, you don’t get the information to conveniently run the trek! That’s a no-go for a stand-alone module. I indubitably by now sound like a broken record, but I’d very much recommending getting “Mountains of Madness” over this stand-alone version. It also has more detailed mountain hazard rules etc., which seriously add tremendously to the whole sequence of 4 adventures. But I digress.

When the PCs arrive, they’re faced with a siege – the hobgoblin army has encircled the fortress, and it has siege weapons! The PCs can attempt to take these down, if they feel stealthy/clever, and there is a secret entrance to the fortress – provided the PCs beat the aberrant giants lairing there. Once the PCs have made it into the fortress, they’ll have their tasks cut out for them: The mysterious spinning sickness (which causes a sense of vertigo) may not be fatal, but it sure as heck makes fighting very hard. The citadel’s quartermaster, Truvven Blackgranite, wastes no time: The dwarves can’t best or outlast the hobgoblins in their current state, so he asks the PCs to travel to MounT Huumvar atop the Feirgotha plateau to cut off the hobgoblin army’s head. Mount Huumvar is a superb defensive position, but when the Kingdom of Arcady yet flourished, there was a temple created to the foreigner’s strange deities – in this temple of Aten, there is supposed to be a secret entrance to Mount Huumvar, granting a small team a chance to eliminate the hobgoblin high command. Of course, clever PCs may want to first investigate this mysterious disease, and indeed, the investigation that leads to the false dwarf assassin/witch multiclass perpetrator is nice, though it is presented in a pretty swift/efficient manner.

Once that snake has been taken care of, the PCs are off through the mountains, hopefully not running afoul of the hobgoblin warriors. They make their way to the dilapidated temple, and through it, navigating a wikkawak lair (!!) to finally infiltrate Mount Huumvar. These dungeons all have in common that they adhere to an internal logic I very much enjoy: The placement of traps makes them potentially predictable by defensively-minded PCs who think about where they tread, and the new haunt featured also follows this. Funny: There is a white dragon that allows you to get in all those Mr. Freeze puns and dad jokes from the classic Batman & Robin trainwreck of a movie. It’s a nice change of pace for a species of dragon usually relegated to little more than beasts. Another plus here is that monsters and the like don’t behave as mindless beasts; they try to bluff, offer truces and survive. That kind of thing’s too rare in modern RPGs.

Mount Huumvar deserves special mention, as the dungeon level is a pretty tough nut to crack – as the culmination of the “Mountains of Madness”-modules, it very much should be. Careless PCs might quickly face a number of foes, including several unique hobgoblin builds, that can overwhelm them, so careful precision strikes, Stealth, etc. are advised – with them, the complex becomes possible to handle; without them, you should hope that your PCs have learned the values of a tactical retreat. This is per se a great finale.

Editing and formatting are per se very good, though the references pertaining rules featured in other adventures should not be here. Layout adheres to Frog God Games’ two-column b/w-standard, and the pdf sports a few b/w-artworks. The pdf comes fully bookmarked for your convenience. Cartography is b/w – and guess what? Yep, of course, the player-friendly versions of the maps, which had been included in Mountains of Madness…are absent from this one.

Tom Knauss’ “War of Shadows” was one of my favorite modules from the Mountains of Madness adventures, as it manages to take leitmotifs from each of its predecessors and weaves them into a satisfying conclusion for the adventure arc. However, much like the other 3 modules in the arc, it deserved better than what it got here. I genuinely LIKE the saga, and it wouldn’t have been that hard to include some of the material that made Mountains of Madness so rewarding throughout these stand-alone renditions of the modules. Here a hazard, there a new creature *cough* missing boss in God of Ore */cough*, and we’d have an impressive array of modules here. Indeed, in an ideal version, there’d have been revisions of the adventures to make them more self-contained; at the very latest with “Between a Rock and a Charred Place”, and here as well, we have modules that really, really are intended to be run in sequence. Either that, or properly designate them as a series that requires the previous modules – “War of Shadows” requiring two adventures for the notes on certain features and environmental rules? That’s not cool.

Beyond being an unfortunate decision, it also further underlines the whole sense of “rushed stand-alone version” that I got from all of the 4 adventures. From the references to other adventures to the horribly-botched God of Ore-version, they have in common that they deserved better. The absence of player-friendly maps that EXIST (they are all in the Mountains of Madness hardcover! I checked!) and these errant cross-references just emphasize this. And that, to me, is a tragedy. I really liked the modules in Mountains of Madness, where they operate as they should. Here? Here, I’m genuinely crestfallen about how this turned out. My final verdict for “War of Shadows”’s stand-alone iteration has to reduce a module I’d have given my highest accolades in its original iteration to3.5 stars, rounded up. Tom Knauss’ cool 4 modules deserved better than this.