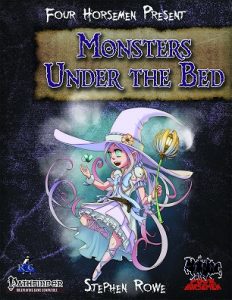 So, what is the intent of this book? Well, first of all, PFRPG assumes that most creatures are defeated by combat, right? Well, if you’ve been following my reviews, you will note a certain belief of mine pertaining moral values that can be conveyed via roleplaying games. This pdf’s first goal, then, would be to provide options to make monsters more suitable for children of ages 8 and below. The first creature in this pdf would be actually a template with a sample being – the option to make baby creatures at CR -3; including mechanical representations for being hard to hurt for even the most cold-hearted of villains and the required mechanics to properly take care of the toddler – so yes, taking care of the creature thus modified can be an interesting challenge during regular adventuring.

The next creature would be the Toy creature, which is entertaining, but also fragile and comes with either a CR +1 or +0 modification for the base creature…which would btw. be as well a place as any to note that the sample creatures with templates applied (as well as the new creatures) do feature adventure hooks spelled out for you – and they are rather creative. Trojan toy ogre? Pretty cool idea! Cooler yet: When a weakened hell hound, always a runt and scaredydog, is looking to finally get some weak-looking sheep…which may well cause a panic. The CR clocks in at -1 and the creature to which this template is applied can be cowardly, a caregiver, comedic, cowardly – this whole template has basically 6 individual weaknesses to take the edge off the critter.

Beyond these templates, the pdf contains monsters – like the CR 3 Closet Creeper that may hide under beds and closets – and, as parents all over the world have been telling their kids…it’s more afraid of them than they are of it. If a kid does suffer from fear regarding the “man in the closet”, RPing an encounter with a benign and incredibly cowardly creeper may actually solve that. So yeah, kudos! At CR 5 candy golems are vulnerable to…being eaten. Even regular creatures gain bite attacks against them! Less malign than regular gremlins, the CR 1 boogrel gremlins (3 sample traps included) are the tricksters of the gremlins and look the part – they feature a rather cool full color illustration.

More suitable for older children would be the CR 10 haunted mansion – which takes the route of making it basically a less mobile mimic-style critter. This is generally a solid idea, but one I’ve seen before and one that I would have loved to see done in either a more kid-friendly, goofy version or one that featured full-blown haunt control, a weakness to exploit…the like. That being said, the fluff centering on scaring folks rather than killing them is nice.

The final creature herein would be the being featured on the cover – the CR 7 White Hag: While they can detect thoughts and feature basically the tropes of the fairy godmother/benevolent fey, they also are incredibly gullible and perceive the world in absolutes, where heroes can do no wrong…which, particularly for kids and adults with a finer ingrained and complex concept of right and wrong may make for some truly intriguing adventuring opportunities. The proposed hook about always getting your way and the issues with that certainly sport didactic potential galore!

Editing and formatting are top-notch, I noticed no glitches. Layout adheres to Rogue Genius Games’ two-column full-color standard established for the series and the pdf comes fully bookmarked for your convenience. Artworks range from somewhat creepy b/w-stock to nice original full-color for two critters.

Stephen Rowe knows how to write child-friendly material; he has written one of my all-time favorites regarding kids-adventure (and since Gencon, I actually have a signed copy! YEAH!) – so yes, he does know what he is doing. The focus away from potentially lethal combat to being slightly spooky (as in Scooby-doo-levels or below) and the focus on nonviolent conflict resolutions and misunderstandings make the critters herein potentially suitable for even the youngest of players. The surprising highlight of this book, in spite of the neat builds for the monsters themselves, though, would be the treasure-trove of ideas in the adventure hooks, with each being a potentially rewarding experience for players and GMs alike.

For the fair price, the significant majority of critters contained in this pdf do what they set out to do admirably and feature quite a lot of adventuring potential – now if you’re looking for truly scary monsters, you’d obviously be wrong here, but if you’re looking for ideas and creatures to supplement your games for the youngest players (or just want a change of pace), this delivers – more so than I expected it would. A good GM can easily get more than one adventure out of each creature herein, with the hooks already being great pointers to further develop. Considering the amount of play-time you can get out of this, my final verdict will hence clock in at 5 stars + seal of approval.