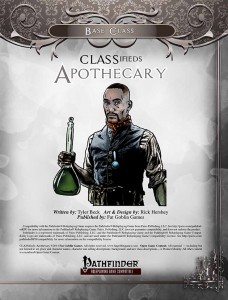 This installment of the CLASSifieds-series clocks in at 9 pages, 1 page front cover, 1 page SRD, 1 page advertisement, leaving us with 6 pages of content, so let’s take a look, shall we?

The apothecary is a new base-class provided herein – it sports 1/2 BAB-progression, good fort- and will-saves, simple weapon and light armor proficiency and Brew Potion as a 1st level bonus feat. The class lacks HD and skill-information, though. This is a glaring oversight, for while the class obviously mutated out of an archetype, it lacks the “X replaces Y”-information that is the standard for archetypes and thus would be considered a class of its own. While I assume the alchemist’s default here for both, I can’t properly judge whether this is the case or not – as a full caster, there is a good chance the apothecary should have less skill points, a lower HD or a modified skill list -alas, I can’t tell since the pdf omits whether this is an archetype or an alternate class, the latter option potentially generating more issues.

The class is pretty much defined by its alchemy class feature – this functions kind of like an alchemist’s alchemy, including being based on Intelligence – however, unlike the alchemist, the apothecary’s extracts extend to 9th level and the class has its own extract list. Beyond this pretty solid list, the apothecary also receives a list of so-called concoctions, the first of which is gained at first level, +1 every two levels thereafter. So of these are metamix concoctions (including level-increase), which means that metamagic-like effects can be added to the effects. Concoctions also include a limited list of discoveries, the option to grow monsters (summon monster) from bottles (including a solid scaling mechanism) and the option to distill scrolls.

Generally, these concoctions are pretty solid, though I consider Ray Bounce somewhat nasty – missed rays can affect a second target if you manage an attack at -5 to atk…which is not bad for the pure class. Alas, the lack of a minimum level required makes this potentially broken when used in dipping. A minimum level would be appreciated here. On the plus-side, the other concoctions do feature such caps where applicable, solidly situating e.g. the cool contingency extract-option at a level where dipping would not make it viable – kudos!

Beyond these concoctions, apothecaries begin play with tonics, the cantrips of the class. 20th level provides one of 3 capstones, which range from immortality to Int-bonuses to an outsider-apotheosis..

Editing and formatting are good, I noticed no glaring glitches apart from the omission of skills and HD. Layout adheres to Fat Goblin Games’ two-column full-color standard and the pdf has the nice cover art. The pdf has no bookmarks, but needs none at this brevity.

Tyler Beck delivers an intriguing take here – the extract-based full caster. The achievement of this class, thus, imho can be found in the solid, well-rounded and unique extract-list – it’s subtle, but the list is pretty nice. The apothecary quite frankly surprised me – it does sport some truly evocative visuals (monsters from bottles? Heck yeah!) and fills a niche not yet covered. Much to my extreme annoyance, the pdf ALSO fails to list the ability-type (I.e. Ex, Su, Sp…) of the respective abilities gained. All of them. This is a blatant oversight that should have been caught.

On the plus-side, the rules-language is more precise than I expected to see and overall, this would be a class I’d rate as good, bordering on the very good, at something along the lines of 4.5 stars – and probably round up….had this no issues. The ray-bouncing could use a minimum level; and then there would be the lack of designation as either archetype or alternate class – and the subsequent ambiguity regarding two basic, crucial components of it. If you consider my harping here over the top, please remember that alternate classes lock themselves out of the ones they’re based on, so this may or may not eliminate potential multiclassing issues – as provided, I can’t judge it properly. It should be taken as a sign of how nice this one is per se that I still can’t bring myself to rate this any lower than 3.5 stars, in spite of these glaring omissions. I do have to round down, though.

You can get this per se cool class here on OBS and here on d20pfsrd.com’s shop!