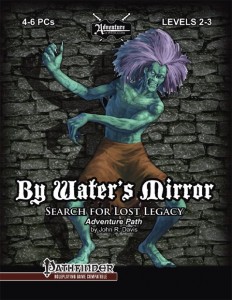 The long-delayed second part of the Search for Lost Legacy adventure arc clocks in at 48 pages, 1 page front cover, 1 page editorial/ToC, 1 page SRD, 1 page back cover, leaving us with 44 pages of content, so let’s take a look!

All right, still here? Having succeeded in the first module, the settlement Krisen, now complete with statblock, is still suffering from an imperceivable pall – the dread wizard Vargon, caught between the state of lichdom and mortality, is still in stasis and still, his descendant seeks to unearth the power of the fallen archmage. Having braved the mine and reopened it, it is time for the PCs to venture further below, into level 2 of the strange complex hidden beneath the soil of Krisen’s mountains, with perhaps diplomatic contact established with gillmen further providing a means to gather information and learn about what dwells below, following the trail of the long-perished adventurer group that went by the name of “Emerald Band.”

The complex of Vargon thus constitutes a collection of former quarters of his Crimson Guard, laboratory rooms, summoning chambers – essentially, what you have here is a complex that tells its own story in a rather interesting way – when e.g. salt mephits can be found and once were used in incubators to experiment with good dragon eggs, when a burning skeletal champion or a basilisk roam these places, they never feel random or strangely placed.

When e.g. extrapolations info for certain books and the like actually provides read-aloud material for the GM alongside information that contains hints for passwords, when riddles not refer to tired real world concepts, but actual in-game knowledge in a clever and obvious way (no, I’m not referring to roll d20 to succeed…), when skum gardeners, bereft of any true sense of changing years and studded with an inhuman psychology just want something different to eat, when a devil is so utterly bored, he is not frightening any more, but only wants to be dismissed from service – that’s when you’ll realize that this module does tell its story in a highly unconventional way – this complex, even more so than the first level, is all about indirect story-telling, in a mastery one only rarely sees from a given pdf.

The truly stunning thing, though, would be how this sense is evoked to create a sense of immersion – not every room has a deadly encounter or trap, though many do; what makes this work is the implied realism and the central leitmotif of decrepitude suffusing each and every read-aloud text and room – alongside the theme of abandonment. Much like some rare video games, this module actually managed to evoke a sense of melancholy, of abandonment of once high dreams squashed – when old fairy tale books provide hints, when loyal retainers still perform non-sense tasks and when conjured outsiders have been either driven mad by boredom or just have become hostile, adhering to commands long gone – then you’ll realize what makes this module special, at least to me.

This module does come with a nice full-color map, which also comes as a player-friendly version, though annoyingly, the side-view of the overall layout of dungeon-levels on the player-map spoils dungeon-entries and location of levels 3 and 4 -I sincerely implore GMs to cut out these spoilers before handing out any part of the map to the players! That being said, I wholeheartedly endorse the pdf’s player map omitting secret doors, allowing you to cut out the ma’s components before handing them out, piece by piece, to your players as they explore – kudos! (Coincidentally, this, the intended use, also negates aforementioned problem with the dungeon’s side-view…)

Editing and formatting are top-notch, I noticed no significant glitches on a formal level. On a rules-language level, there are quite a lot of deviations from the default to be found herein, though that is less problematic for adventures than for crunch-books. Layout adheres to a beautiful, easy to read and organized 2-column full-color standard and the pdf comes fully bookmarked for your convenience. The pdf sports copious amounts of nice full-color artwork and a nice map.

John R. Davis’ first part of the adventure arc, released way back, was promising – an interesting set-up, but it did leave me wondering whether he could maintain the fragile atmosphere – let’s get that out of the way: He did. This is very much an old-school module in that it presents a dungeon crawl, yes. But one where the true draw lies beyond the immediate sum of the constituent parts: We do have nice encounters, chances to use social skills etc. – the diversity is here.

And much like its predecessor, this is an easy module and should not yield too many dead PCs when handled with care. The glorious component and the main draw of this module, though, remains its ability to actually retain a dense atmosphere of immersive, indirect storytelling wherein the PCs are not hit over the head with the story, but rather than that rewarded for speculation. This is one of the dungeons, where carefully planning PCs move from room to room and actually have this experience of unearthing a story by walking its corridors – a story of abandonment, failed ambitions and dreams that is represented by an omni-present decrepitude as a subtle leitmotif. Where part I subsumed the mechanics and challenges wholly under the focus on atmosphere, the second installment increases the challenge, providing at least 3 encounters that can go wrong for unlucky PCs, somewhat increasing the challenge posed by this module – while still not difficult, this does eliminate one of my major gripes with part I.

When I read this pdf, I was skeptical and not too blown away, but in actual gameplay, this worked out as a very immersive experience that surpassed part I by quite a bit, being simply more refined in all aspects, providing a welcome level of detail – when ancient beers can develop beneficial or detrimental magical side-effects, when read-aloud texts galore help you run a module, you even look past one or two turns of phrases that fall slightly behind in narrative quality, because the overall package just works. In parts, this felt almost like a slightly more playful Raging Swan Press adventure, and I mean that as a compliment towards the level of detail the dungeon offers. Especially less experienced GMs that are daunted by some of AAW Games’ more complex modules should have a field day with the content provided herein.

I’ve been thinking for quite a while – my players very much mopped through this dungeon and felt it to be pretty easy and this module does not sport AAW Games’ usual high-concept, unique takes and the like – but know what? It doesn’t have to – it is an excellent example of what can be done to evoke a truly unique and compelling atmosphere and ultimately, my players really LIKED this module, in spite of it being too easy for their almost pro-gamer-like sensibilities – when an atmosphere manages to maintain immersion despite that, manages to evoke a theme so fragile, one cannot loudly complain, now, can one? In the end, this was a blast to run and constitutes an example of a truly well-crafted module, one only rarely marred by strange, sudden lapses of writing quality where evocative prose suddenly gives way to pretty bland, simple sentence-structures in an odd quirk. I really, really enjoyed the module as a whole, though- and hence, I will rate this 4.5 stars, rounded up to 5 for the purpose of this platform.