Animal Races: Clan of the Turtle

Animal Races: Clan of the Turtle 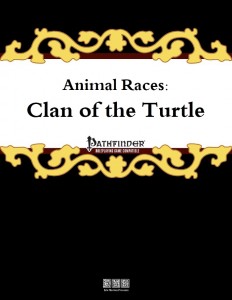 This installment of the Animal Races-series clocks in at 11 pages, 1 page front cover, 1 page editorial, 2 pages SRD, 1 page back cover, leaving us with 6 pages of content, so let’s take a look!

Not one to shirk obvious and established tropes, the clan of the turtle, as defined herein, is a surprisingly lawful cadre of individuals that have taken to sewers and shadows, providing shelter for the downtrodden and hunted, as an aptly-written piece of introductory prose establishes. Members of the clan of the turtle may be either medium (+2 Con, -2 Dex) or small ( +2 Con, -2 Str), are reptilians with the slow and steady quality, low-light vision and scent, +1 natural armor that increases to +2 at 10th level, a primary natural bite attack at 1d4 if medium, 1d3 if small. The race also has some truly unique benefits: For one, they may ignore the prerequisites of the Stalwart Defender-prestige class, choosing it as starting class. The turtle shell acts as a masterwork scale mail that cannot be removed – even if destroyed, it only is reduced to 1 hp and gains the broken condition. It does heal with you and you can sleep in it. Additionally, it can be enchanted as per the normal rules. Note that armor bonuses stack with all bonuses except armor bonuses, so yes, you can upgrade this, should you choose to, though the armor check penalty (-4) and the 25% arcane spell failure chance severely limit the draw of turtles for certain classes.

A total of 4 racial heritages can be chosen: Terrapin get +2 to Wis and may select Turtle Clan Mariner as a stalwart defender’s defensive power. Members of the tortoise clan also get this attribute modification and trait, but may instead select Turtle Clan Heritage. Turtles are stat-wise identical to tortoises. Finally, Turtle Mutants get +2 to Dex and may select Turtle Clan Mutant as a ninja trick. What do these feats do? Well, the three feats mentioned provide access to an array of different racial abilities, gaining an upgrade to the available selection when the low level abilities have been gained. The regular Turtle Clan Heritage allows for increased shell hardness and upgrade to masterwork breastplate for the shell and bite damage-size-increase (to 1d6/14, respectively), with high level increasing natural armor. Turtle Clan Mariners also increase bite damage and breastplate shell upgrade, but may also choose swim speed 20 ft., with higher levels providing faster swimming and the natural armor upgrade. Finally, Turtle Clan Mutants can increase their land speed by +10 ft., improve their bite and the upgrades allow you to treat the shell as mithral and not impede monk et al. abilities like evasion etc. The high-level ability of the feat is the natural armor increase once again. There also is a feat that nets you +1 defensive power.

As with the other animal races, this pdf does provide pretty extensive information on folklore and mythology of the clan, covering interaction with dragon turtles, redcaps, kappas – whatever you desire, thus providing an interesting perspective and anchoring the clan within the frame of a campaign – this extends to a genealogy that makes surprising sense to me and thus maintains the tradition of the series providing a concise, smart racial presentation. The deity provided herein may be a surprising choice – The lawful evil Dark Warrior of the North, a warrior who sacrificed all in his quest for immortality, even his name.

Now one of my favorites in the series would be how it handles traits -instead of providing racial traits that exist in a vacuum, heraldic crests double as traits for the race, though the interesting point here would be the bonuses granted – when chosen as the first trait, some of these do provide bonus feats, though at the cost of a slight drawback: Combat reflexes as a bonus feat is strong, yes, but -2 to initiative is nasty. The interesting thing here would be that weaker traits are also properly balanced against drawbacks or lack thereof.

Eric Morton’s turtles had their work cut out for them – how easy it would have been to only make this a retreading of TMNT-tropes…. Thankfully, while present, that’s not the way he chose to handle the material, instead weaving a tapestry of surprising variety and density. As always in the series, his talent for intelligent, concise writing manages to get a LOT of material into this short pdf. I also very much enjoy how this pdf provides a unique mechanic that makes the stalwart defender a more valid choice. That being said, at the same time, this focus means that members of the turtle clan SUCK at being arcane casters and with ACP, they also aren’t particularly good rogues and ninjas – there is no means for the race to offset the penalties incurred by the shell’s armor emulation, which somewhat limits the appeal of the race regarding its classes. I still very much enjoyed this pdf and it does several interesting things and sports a concise and smart prose – hence, my final verdict will clock in at 4.5 stars, rounded down to 4 for the purpose of this platform.

You can get this inexpensive, nice pdf here on OBS!