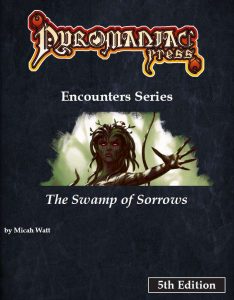 This installment of Pyromaniac Press‘ brief sidetrek modules clocks in at 11 pages, 1 page front cover, 1 page editorial, 1 page SRD, 1 page back cover, leaving us with 7 pages of content, so let’s take a look!

Now first of all, you should be aware that, like all Pyromaniac Press-releases, this adventure sports copious amounts of well-written read-aloud text, with a quality of prose that is significantly above average – the atmosphere evoked in the module is pretty impressive, so if you’re struggling with that aspect of your GM duties, this has your back. Secondly, the excellent full-color map of the encounter actually comes with 3 different iterations: A GM-version with numbers, grid, etc.; a tactical player’s version with a grid and no numbers/SPOILERS on it and a third version for everyone who doesn’t even want a grid on their map. All maps as provided as high-res jpgs, providing full support for guys like yours truly who suck at drawing maps and VTTs alike. Big kudos!! Comfort-level-wise, this is absolutely top tier.

All right, only GMs around? Great! A recent earthquake has provided all the opportunity a dryad needed to finally escape the enslavement by a nasty, evil druid – alas, her ordeal has rendered her pretty much crazy…and the earthquake has also brought her domain perilously close to the traveling routes of mortals…which is bad news, considering how she thinks of herself as “The Dryad”, meant to exterminate mankind. Three nice hooks are presented for the enterprising GM, in case a mere roadside excursion does not suffice, providing a rescue angle, for example.

Now, as one glance at the map shows you, there is plenty of water in the swamp, which means that difficult terrain will be a factor – and so is the possibility of drowning. The peculiarity of 5e has been properly acknowledged here, using rules analogue to suffocation – kudos!

The water weirds that represent minions here can be pretty nasty, so yeah, the PCs have been warned in more ways than one.

Within the dryad’s domain, the crucified remains of the dark druid that once enslaved her can be found, attached to the Tree of Woe; a ring of stone pillars, studded with the corpses of fallen bandits, encircles the dryad’s place and generates a surprisingly dense atmosphere of foreboding, and so do the remains of the woodcutters she got her hands on. Even before the aforementioned captured trapper is found, the PCs ought to have realized that this will not be a cuddly walk in the par…ehh, swamp.

A whirling pool contains an elemental…and the dryad herself is no pushover: Accompanied by a dire bear, the challenge 6 lady comes with full boss stats – which include a variety of potent and lethal signature abilities, including legendary actions: She can fire lash out with vines, is poisonous and her entangling vines crush those that she entangles. In short: She is a DEADLY skirmisher. The dryad is deadly, but, to put my nitpicker’s hat on, the lady does suffer from a minor hiccup: She refers to the entangled condition, which RAW does not exist – while it’s simple to default to the spell’s effects, it’s still an imperfection that can cause a bit of confusion. I am also a bit puzzled how her skills came to be: At proficiency bonus +3 and Wisdom 16, her Perception should either be +6 or +3, not +4, for example.

Oh yes, dire bear. You see, we actually get dire bear stats herein as well – at challenge 5, this fellow is DEADLY. However, it should be noted that a few glitches have crept into the statblock: At challenge 5, he should have a proficiency bonus of +3, which means that the attack values should be one higher; similarly, the Perception skill should be one lower. I may be missing something, but yeah. Considering how lethal the lady is, this is a bit puzzling.

Editing and formatting are good on a formal level. The statblocks themselves sport a few minor hiccups, which unfortunately accumulate. Layout adheres to Pyromaniac Press’ two-column full-color standard and is nice; the artworks deserve special mention: We get a cool b/w-piece and the badass artwork in full color on the cover, which is duplicated sans cover etc., hand-out style. Really cool! The pdf comes fully bookmarked for your convenience and the cartography, as mentioned before, is amazing, particularly for the extremely low price point.

Micah Watt’s latest encounter is not a brief mini-dungeon, but rather a complex, multi-layered wilderness locale that can easily play like a multiphase combat or slower exploration. The story takes a slight backseat to the atmosphere here. It is pretty impressive to see how the author managed to squeeze some genuine flavor out of a per se classic set-up. The amazing boss battle in particular represents a challenging, unique experience that, on its own, may warrant the more than fair asking price. The 5e-conversion per se is nice (big kudos for the dire bear stats), but at the same time, the hiccups in them, while not impeding your ability to run the module, may upset some of the more mechanically nitpicky GMs out there. As such, I cannot go higher than 4 stars for the 5e-iteration.