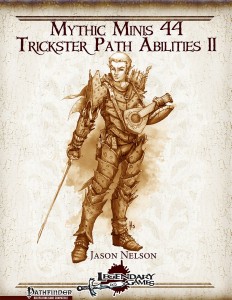 -Insider Trading: Use various skills to reduce costs when creating items in cities- cool! (Though I would have enjoyed a specific mentioning of whether each check eats some time…or specification that the checks happen as part of the crafting process.

-Shadow Cloak: Use mythic power as a swift action to reduce illumination to dim light status, also receiving 20% miss chance + skill bonuses, darkvision and higher jumps while in the dark.

-Technological Tinker: Receive technologist as a bonus feat, bonus to tech-related skills and no auto-glitches for timeworn technology; also decrease the glitches by 5% times mythic tier and gain some measure of control when a glitch does happen. Also: Less energy expenditure when making items via a facility. nice one!

-Haunting Melody: Non-mythic creatures must save twice versus your bardic performance. On a failed save on the first save, creatures become shaken/increase fear-effect by one step. Makes fear-based performances even worse for foes. Via mythic power, you can also use this versus mythic creatures. Solid.

-Magic Trick: Select a spell from any arcane spellcasting class, which you then can use 2/day as a spell-like ability, with mythic tier determining the max level. You can expend mythic power to upgrade this to mythic versions (and even augments) – alternatively, this allows for the use of mythic power to choose another spell and also modify the ones selected with the minor/major magic rogue talents, allowing for some wildcard flexibility.

-Shadow Blending: As a move action, turn invisible in any lighting condition but bright light. Mythic creatures with darkvision may still notice you, but as a cool additional benefit, you may specify special senses like lifesense, scent, etc. to not be able to detect you.

-Make Your Own Luck: Transform competence, insight or morale bonuses to luck bonuses at will.

-Shadow Form: Shadow Blending as per the abilities before also renders you incorporeal, increasing your speed as well. This also has a cool visual representation when e.g. within objects. Powerful, iconic, awesome!

So yeah, while there some minor nitpickery I can muster for this mythic mini, this nonetheless remains a glorious installment in the series; Jason Nelson delivers one of the best path ability-centric mythic minis in the whole product line herein, well worth a final verdict of 5 stars + seal of approval for some thoroughly iconic options breathing the spirit of what mythic adventures should be all about.

You can get these cool path abilities here on OBS and here on d20pfsrd.com’s shop!