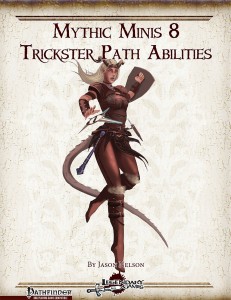 All right, another path-ability installment, so let’s take a look whether this one can finally convince me.

We kick off with 5 trickster abilities for 1st tier, with one, analytical eye, having already featured in teh Guardian Path abilities. I didn’t consider it good design and too metagamey back then and that has not changed. Next.

The first new one would be backstabber, which is a passive benefit that increases to-hit and sneak attack damage output and allows you to spend mythic power to flank otherwise unflankable non-mythic opponents. Solid, nothing to complain about.

Caress of Steel hits a soft spot with me – it annuls the non-lethal damage penalty to atk with lethal weapons – and allows you to deal nonlethal sneak attack damage with lethal weapons. And yes, according to RAW, you can’t do nonlethal sneak attack damage with lethal weapons, even when taking the custom -4 to atk. So essentially, this path ability eliminates a bad, gaping and annoying hole in the rules, which I applaud. The thing is, though – much like backstabber, this doesn’t really feel that much like a path ability, more like a feat to me. (And a feat I think that should be non-mythic, but that’s my obsession with “Good PCs don’t kill intelligent humanoids unless absolutely necessary..:”) So all in all: Makes sense, streamlines the basic rules, can’t really complain.

False Allegiance on the other hand is essentially what I’d like to see as mythic abilities – you can bluff foes to believe they’ve positively influenced you with social skills or magic and then stab them in the back – yeah! One gripe, though – I *think* the ability needs a caveat that such a bluff also emulates the enchantment aura of the resisted spell/effect, otherwise tricksters are too easy to unearth in non-combat situations…

Out of the Way is also a strong, cool mythic ability, allowing you to not hinder allies by providing cover to foes and you even take no splash damage from allies (alchemist-double-team…yeah!) and can reroll fumbles against the saves of effects of allies.

We also get 5 3rd tier abilities, with one, “That Trick Doesn’t Work on my anymore”, still being solid (as a follow-up of “Analytical Eye”) and still being none too impressive and too metagamey for me. So 4 new ones remain. Killing Joke is what I’d call worthy of mythic tricksters – use perform comedy to demoralize or make friendly and replace the resulting shaken condition with rendering the target flat-footed for one attack and then shaken. As big glitch in a cool ability here: As written, the target only loses the flat-footed condition if *YOU* attack it. RAW your allies can whittle away, though – a tighter wording is in order here, since I’m quite sure the ability is supposed to return from flat-footed to shaken after one attack, not just one attack by the trickster…

Masterful Skill Focus and Perfect Pickpocket are rather bland, offering passive bonuses (though the latter allows you to use the steal combat maneuver sans spoiling invisibility and thus makes some sense). Now Steal Spell on the other hand, has something going for it, allowing you to steal spells you interrupt and cast them via uses of 1/2 spell level mythic power.

We also get a new 6th tier mythic ability, the ability allows you to reverse social skills/enchantment effects etc. on your foes as an immediate action for 2 uses of mythic power. Okay improved version, but at 6th tier perhaps a bit high – this one’s not *that* strong.

Author Jason Nelson delivers path abilities and this time, they feel a bit more compelling than the previous ones released in thy mythic mini-series. The solid, mostly passive benefits are per se okay, even if they lack the epic “I AM MYTHIC”-spark at times. The recycling of Analytical eye and its follow-up is not something I’d consider a good thing. Then again, Caress of Steel fixes an annoying hole in the rules, Out of the way is damn cool and Killing Joke’s concept (if not its slightly flawed execution) is awesome. In the end, though, that’s not enough to truly make this stand out and the glitch in Killing Joke is rather jarring. My final verdict will hence clock in at 2.5 stars, rounded up to 3 for the purpose of this platform due to in dubio pro reo and a slight increase in awesomeness from previous path-centric mythic minis.

You can get these abilities here on OBS and here on d20pfsrd.com’s shop.