EZG reviews Rise of the Drow Prologue: The Darkness Arrives

Rise of the Drow Prologue: The Darkness Arrives 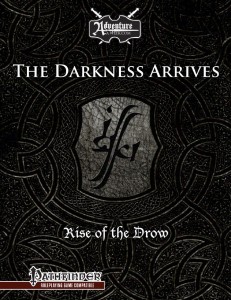 So this is the prologue for AaW Games’ massive mega-adventure Rise of the Drow…let’s take a look! Page-count wise, this module clocks in at 129 pages, 1 page front cover, 1 page editorial, 2 pages of ToC, 2 pages of SRD, 1 page back cover, leaving us with 122 (!!) pages of content, the first page of which would be an introduction by the authors before the first part, Jonathan G. Nelson and Stephen Yeardley’s section of the module begins.

I won’t waste much words here, so here’s the obligatory SPOILER-warning. From here on out, players should jump to the conclusion. Got that? Great!

Only DMs here? All right! We start our scene at the lavishly detailed frontier’s town of Rybalka, studded in AAW Games by now trademark blend of unique cultures, in what can be considered the equivalent of a longest night/Lucia-style folklore ritual, when fellow adventurers barge in and the ceremony must be maintained – against hunters acting obviously under some sort of compulsion, trying to extinguish the light – or rather, set fire upon the cathedral (and quite possibly, themselves) – thus requiring non-lethal means to subdue them. This is a great way to introduce local color and characters, while under the threat of the opaque, shambling beings outside and hinting at the shape of greater things to come – a full-blown assault by elemental spirits, turned archons, ghoulish goblins and all manner of other weird creatures – thankfully, the DM isn’t left alone with this chaos, as the PCs try to keep the cathedral intact, calm people and prevent the theft of the mysterious moonshard – alas, even if the PCs can end the chaos in the cathedral, even if mysterious warnings by as of yet not fully corrupted vampire spawns are heeded – after that, the chase is still on – against drow hunting parties heading off for the Dark Wood, with quite a bunch of Rybalka’s congregation in tow. With help from the fellow adventuring party and by now, tested to their breaking point by engaging the drow, the PCs have completed the first part of this module with a furious bang.

After the singularly most disturbing full-page drider artwork I’ve EVER seen (yes, better than any WotC or Paizo-rendition), part 2 (written by Steven T. Helt) begins with the PCs on the hunt for the drow in teh Dark Wood – and, push coming to shove, things get eerie….fast. The eclipse Naraneus Shadow, which swallows starlight, moonlight, sunlight – everything, is upon them and thus, the already creepy forest more than deserves its moniker…and worse, the eclipse JUST DOESN’T END. The PCs are on for a trek through one of the most feared forests, while no light permeates the gloom in a dread and surreal overland chase/tracking game – and believe me, the wilderness and its inhabitants (including btw. a glorious map of the area) are not to be taken lightly in the slightest – the challenges are quite profound and a skilful Dm can evoke a rare sense of dread via the smartly chosen adversaries here -even before the furious finale (including a battle-map style map).

In the ruined castle Adrik’s Folly, the commanders of the drow await – and the final part of the module can be considered a MASSIVE infiltration scenario: Schedules, castel population, short fluffy descriptions to keep even characters with the same statblock apart, a massive map, several suggested means of accomplishing their goals – Michael McCarthy, author of this final section, in no way rests on the laurel of his co-authors. The infiltration is detailed, fair, difficult, organic – including, thankfully, even a harrowing escape with the enslaved townsfolk and a last stand at a country manor are distinct possibilities – let’s hope the PCs were smart enough 8and wilderess-savvy9 and kept the populace from eating those funny, cramp-inducing, slowing berries…

We also get concise lists of drow traits and even an encounter index.

Editing and formatting are very good, I didn’t notice significant glitches. Layout adheres to a drop-dead-gorgeous, very easy to read two-column full color standard on a purplish-dark background, which translates relatively well to grey-scale in my experiment, but in the end, I’d still go full color – mainly for the great maps and at times simply glorious and copious full-color artworks. The pdf comes fully bookmarked for your convenience and provides full stats for all creatures in 3.5 and PFRPG.

I was skeptic about the separation of authors/parts, to be honest – it’s easy to lose the thread of a cohesive, narrative voice and assume different things. Thankfully, the team of authors has done a great job that caters to their strengths – we got the knack for tradition and ritual, the uncanny grasp of what makes a society distinct and believable from AAW’s core author-team, expanded by Steven T. Helt’s sense for one eerie, cool wilderness trek and finally, Michael McCarthy’s strength for cool, organic complexes (as showcased before in e.g. Incandium’s Eruption) for a module that is greater than the sum of its parts.

This module does an awesome job at establishing the Drow as a cool, competent and damn frightening force of foes (the implication that they can DARKEN THE SUN, when driven home right by the DM, should make the PCs VERY afraid…) and the module offers infiltration, defense, wilderness – over all, an eclectic mix of challenges that should ensure that no PC is left bored. That being said, this module is something I’d recommend to experienced DMs. Here and there, suggested resting/leveling places, precise overland movement charts and the like would have made this module a bit easier on the DM – as written, while not VERY hard to run, it does require some preparation and competence to not get swamped in it. Don’t get me wrong, this *is* a stellar module still, but it definitely is aimed at competent players and DMs – novices might require extensive help by the second adventuring group as DM-proxies to make it through this alive. Then again, that sort of is the point – the opposition is numerous, smart and lethal and beating them should be an accomplishment. As a final piece of advice- I’d suggest establishing Rybalka via one of the other A-series modules before this one – it makes the local color and emotional impact more effective. Still, one furious tour-de-force and well worth 5 stars + seal of approval.

You can get this great module (not only neat for RotD, also great as a stand-alone…) here on OBS!

P.s.: AAW Games currently has their kickstarter for the expanded version of teh Snow White modules running – which made my top ten list last year! Here’s the link!