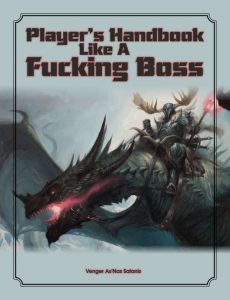 So, the eagle-eyed reader will have spotted, at this point, that this Player’s Handbook is a system neutral book. This may seem counter-intuitive at first glance, considering how PHBs are mostly splatbooks, but bear with me for a while. First of all, while system neutral, the book does offer some crunchy bits – in d20/D&D-based games, these should be represented by a +2 bonus, for d6 dice pool-based games, +1d6 instead. Similarly, the pdf assumes that you know what advantage and disadvantage are. So, while *mostly* system neutral, the pdf does offer some options to make the content matter mechanically.

Anyways, as we’ve come to expect from Kort’thalis Publishing, the book does contain quite a few random tables: We begin with 30 fantasy-sounding names, before providing 8 different fantasy signs/allocated to months. For example, Iar’tan, the sign of the serpent’s foe, is associated with the color green and nets advantage when fighting serpentine, demonic, etc. creatures. Unique here: The months have variable durations, which can be rather interesting when implemented into your game. The table is interesting and flavorful.

From there on, we get a massive d100 table of oddities you may start your adventuring life with – a 6’ long piece of unbreakable string, a weird, purple wizard’s hat made of velvet, an eternal candy cane, a test tube that makes anything poured inside acidic…you get the idea. We have a lot of delightfully odd bits and pieces here, all of which provide some sort of unique angle, a roleplaying hook or simply something weird. The table is one of the finer ones in Kort’thalis’ oeuvre, and considering the amount of tables Venger has written so far, that’s saying something. It should be noted that this table is just as meaningful and helpful for the GM – something that btw. can be said regarding the whole supplement.

Now, in particularly rules lite systems and minigames tend to gravitate towards serious lethality, which is intended, yes, but once in a while, it may be nice to introduce the “Second Chance”-table: 1d4; dead on 1, unconscious on 2, reduced damage on 3 and totally negating damage on 4. Considering the system neutral nature of this pdf, this is surprisingly nice. The pdf also provides an easy to implement honor/infamy system: The system tracks your deeds, associates and reputation as well as your bonds, a term that encompasses deities worshiped, allegiances, etc. For each honorable or dishonorable deed, 1 point is gained. You roll under your honor value with a d20 in your home turf, d30 in borderlands, and d100 in underworld –on a success, you’re well-known and respected, usually providing advantage for different social skills etc. Both honor and dishonor provide 6 suggested, different degrees of fame/infamy.

Need a name for a named item? A handy table lets you roll prefix, root, suffix, each with a d12, resulting in fantastic names:”Vokfenz’mo”? Sounds like something magical! 20 English names/titles for items are also included. I know that I’d like to wield “Evisceration Complete.” The next page provides a d30-table (updated and expanded from a previous pdf) for abilities for legendary weapons – from creating silence-areas to being poisonous, the list contains a lot of suggested abilities. The verbiage is precise, but this table may be most useful for e.g. Crimson Dragon Slayer and similar VSD6-based games, as there is overlap in benefits with regards to other, more rules-heavy games.

More universally applicable would be the d6 “Did you bring it?”-table. It’s basically a quick and dirty means to determine whether a PC has the given item; if you’re preferring a non-simulationalist item-management in your game, this does the trick. I really like the notion of the influence of personal growth: The section codifies a philosophy or weltanschauung of a character in a 4-step progression linked to levels. The respective developments can each provide a one time static/dice pool bonus to one check. This notion is simple, but one that I enjoy and that is pretty easy to implement for even really rules-heavy systems without breaking the games. A d30-table of core values and belief systems can help you decide some of these for yourself – this is certainly a table that could be expanded further.

Inspired by the parody product “50 Shades of Vorpal”, we get a d30-table. Once per combat, a warrior may roll on the table instead of making the usual attack. This has a couple of issues. One, “per combat” makes no sense in game – a combat can last for anything between a day and a round. You kick in the door, kill a goblin. Combat ends. Door opens, reinformcements arrive. Combat resumes. You get to vorpal in each combat, RAW, If you hadn’t killed the goblin quick enough, you’d have just one roll in the same timeframe. Per combat is a flawed metric to determine ability availability in a logical manner in game. The table includes chances to vorpal allies and yourself…or everything. This table, in short, makes most sense for games that don’t take character mortality or the like very seriously. There is a second d30 table for casters as well. This section was my least favorite part in the book.

If you think that bards suck in your game, there is a list of 12 bullet points that bards may use, at advantage. These are, in a way, mostly social tricks. There is also such a selection for clerics. If you’re playing Crimson Dragon Slayer, this section is absolutely REQUIRED for your game, as it finally provides context for healing. You see, beyond the “big” houserules/tables/etc., the pdf also has crunchy bits/suggestions. On this page, one such boxed text codifies cleric healing (1d8 + level); on a result of 1 rolled, the character can’s be supernaturally healed until after 8 hours have passed. This is an interesting way to limit healing-availability without bogging the game down. Personally, I’d have the no-healing-chance escalate with each healing, but that is just my preference and the tweak is easy enough to implement.

The pdf also contains a massive table, where strange physical characteristics can be found. While nominally a d30-table, the respective entries sport different variables as well, 2 or more, in fact. The pdf also has a rather complex and extensive d30-table that spans multiple pages, with each entry providing a defining moment for the development of your character; from new servants that attempted to murder you to foolish marriage, staggering family debt, etc., there are a lot of diverse angles for taking up adventuring.

Next up is another house-rule, end boss battle bonuses. Each may be cashed in once, and only in fight with the final boss. This adds a component of resource-management based on roleplaying for the boss fight; tragic backstory, catchphrases, etc. can yield bonuses. Particularly rules lite systems will benefit from this, as the variant rules make it easier for the GM to create more potent foes, while maintaining a chance for the PCs to win.

Reflecting upon your life can yield advantage or heal 1d6/level, once per session. The pdf then proceeds to provide a quick and dirty rules to determine the outcome of combats versus swarms etc. – for convention games, this can act as a means to skip past the filler etc. when time’s running out.

The pdf ends with one of my favorite aspects of the book, the “Play Like a Boss”-checklist, if you will. This basically gamifies the act of roleplaying your character! If your phone goes off sans emergency, you lose two points. Attuning new magic items nets 2 points, wiping out factions and settlements, inventing quirks/mannerisms/etc. – all with point values added. This is a really great idea and it actually rewards failing saves etc. – in short, the checklist encourages playing your character in a way that is more fun for everyone. This is amazing, and frankly, I wished it’d be even longer! At 3 pages, it is detailed, but the universal applicability of the section makes it really cool.

Editing and formatting are very good, I noticed no serious glitches on a rules-language or formal level. Layout is, as always in Kort’thalis Publishing books, gorgeous and adheres to a 2-column full-color standard with red veins in the background. The pdf sports a ton of really nice, original b/w-artworks, including a couple of full-page artworks. The pdf comes fully bookmarked with nested bookmarks for your convenience, and there is a second, printer-friendly version of the pdf included in the deal.

Venger Satanis’ Player’s Handbook works much better than a system neutral Player’s Handbook would lead you to expect. Now, if there is one weakness to the book, then that would be that there is no truly distinct separation between the more house rules-y components and the dressing/flavor-centric and truly system neutral components. That being said, this pdf should be considered to be worthwhile for a wide variety of groups.

If you’re playing in a VSD6-based game, then consider this to be THE must-have expansion that you definitely want to have. From healing to the optional means to make the combat engine a bit more nuanced and interesting, this must be considered to be a must-own book for such games.

If you’re not playing these games, the book will still have a lot of inspiring ideas for your games: The dressing is high-quality and helpful, and the checklist at the end is genius. Now, not all aspects herein will be sensible or helpful for every group, and you will not use all materials herein, but as a whole, this pdf is worth owning. Now, yes, I maintain that sticking to a system would have potentially increased the use for a single group, but it also would have diminished the overall appeal of the book. This notwithstanding, you get a lot of nice dressing and houserules for a fair price here – my final verdict will clock in at 4.5 stars, rounded down for the purpose of this platform.

You can get this inexpensive, fun book here on OBS!